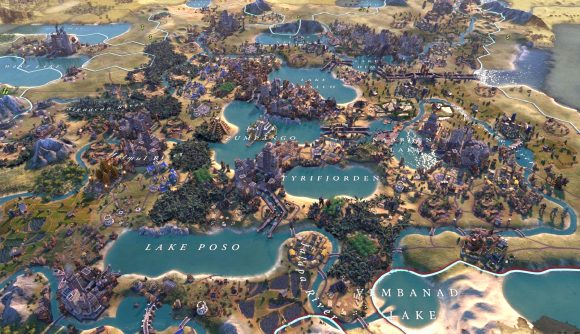 There were plenty of reasons why many preferred Civilization V to Civilization VI when the newer 4X game first released, and even though in recent years Civ 6 has come out the decisive leader of the two, one or two points of comparison will never go away. One of them being the art style.

Now, I don’t have issues with Civ 6’s art direction (and, ultimately, no one seems to care as much as the Age of Empires crowd does about AOE4), but it was certainly a departure from the muted realism of Civ 5. Fans have sometimes remarked that its art style is more 'cartoonish', which is a catch-all term often used for any style that’s bright or exaggerated. It's not something I often think about, but a recent find on the Civ subreddit reminded me how good the Civ 5 style can be if recreated today.

It’s a modification that changes the colour palette to better match what Civ 5 had, and also changes various other things such as terrain textures, water dentistry, even forest geometry.

This awesome canal chain connecting 6 lake cities to an ocean using the Panama canal. from civ

There are more mods at play here according to poster StanleyTheComputer with the full list as follows:

This also happens to be one of the better Panama Canal setups we’ve seen. You get an achievement for building one that stretches the maximum seven tiles, but there have been other great canal setups shared over the years as well. There’s also been plenty of cursed attempts.

Civilization VI recently finished a year-long run of micro-DLC packs and free updates as part of the New Frontier season pass, which culminated in the big April balance update and was overall a success.

Firaxis has so far declined to comment on what’s coming next, so whether we’ll see yet more DLC or perhaps even Civilization 7, is anyone’s guess.