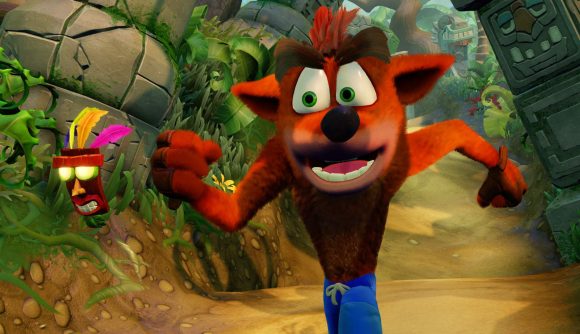 Crash Bandicoot 4: It’s About Time has leaked courtesy of the Taiwanese ratings board, and industry insiders report that it will be revealed as part of the next Summer Game Fest event with Geoff Keighley on June 22. A “surprise major triple-A reveal” is officially scheduled for that event, and Activision has been providing some press outlets with more official Crash teasers this week, too.

The early rating for Crash Bandicoot 4: It’s About Time lists it for PlayStation 4 and Xbox One, under development at Spyro Reignited Trilogy studio Toys for Bob. The fact that this game is being listed just for PS4 and X1 suggests that it’ll be out this year, ahead of the next-gen consoles, but a PC version is notably absent. The Spyro remakes also launched exclusively on PS4 and X1 consoles, but were ported to PC and Switch nearly a year later.

Here’s the ratings board’s description of the game, via Gematsu: “Crash is relaxing and exploring his island in his time, 1998, when he finds a mysterious mask hidden away in a cave, Lani-Loli. The mask is one of the Quantum Masks and apparently knows Aku-Aku, Crash’s mask friend! With the Quantum Masks returning and a Quantum Rift appearing near our heroes, they decide to bravely head through to different times and dimensions to stop whoever is responsible.”

After the leak, market analyst Daniel Ahmad tweeted that Crash 4 would be unveiled at the next Summer Game Fest showcase. A press release for the event promises “a surprise major triple-A reveal hosted live on-air by Geoff Keighley”. The Tony Hawk’s Pro Skater remakes were also announced as part of Summer Game Fest – another Activision-published revival of old games largely associated with the original PlayStation.

This was (is) going to be announced at the Summer Game Fest June 22nd showcase. https://t.co/noqhanwlaj

On top of all this, Activision has also sent puzzles to various press outlets (including IGN) featuring a mask that matches the Crash art style. This mask, which has not appeared in the series before, also shows up on the box art that accompanies the ratings leak, and appeared in a PlayStation 4 ad dating all the way back to 2019.

The Summer Game Fest Developer Showcase takes place June 22 at 8:00 PDT / 11:00 EDT / 16:00 BST on Twitch and YouTube, as part of the continued schedule of summer game announcements. Expect plenty more on upcoming PC games there – even if the latest Crash might be somewhat delayed in hitting home computers.