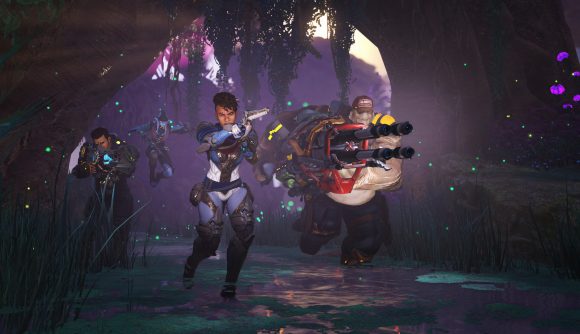 A little less than five months after first release, Amazon’s free game Crucible is being discontinued. Servers will close in November, and developer Relentless Studios transitioned to other Amazon Games projects.

“We very much appreciate the way that our fans have rallied around our efforts, and we’ve loved seeing your responses to the changes we’ve made over the last few months,” the team wrote in a Steam news update. “But ultimately we didn’t see a healthy, sustainable future ahead of Crucible.”

The multiplayer game had barely launched before running into problems. After starting a ‘pre-season’ in May, it was reduced to one mode and the first season delayed in June. Then, in July, it was rolled back from public to closed beta, in order to get a firmer lay of the land of players and assess priorities. The team has gradually updated features since then, per a new roadmap, but according to this post, data they’ve collected made it clear Crucible was going to be too much of a struggle to maintain.

All in-game purchases have been disabled, and you can have anything you’ve bought refunded from the Crucible support page. A last hurrah will start in a few weeks, before servers are officially switched off on November 9.

New World, Amazon Games’ upcoming MMORPG game, is named as one place Crucible developers will be moved to. After a delay this summer, it’s due out in 2021.