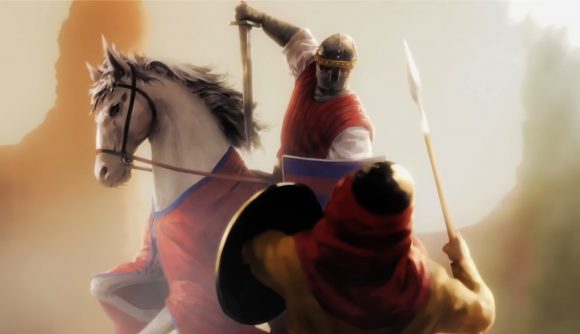 The Fate of Iberia release date is coming up next month, and so Crusader Kings III’s developers have revealed how one of the new systems that arrives along with it will reshape the entire game, whether you purchase the add-on or not. ‘Struggles’ are a new way to understand and contextualise conflicts that embroil regions over the course of centuries, and they’re going to shake up the medieval grand strategy game in some important ways.

In the latest Crusader Kings III dev diary, Paradox content designer Ewan Cowhig Croft explains the scope of struggles and how they’ll play out in the game. The struggle system was developed to handle the Iberian peninsula, but Croft says it “would have been a waste” to make a system this complex and far-reaching that only applied to Hispania.

Struggles are long-term conflicts that can involve any kind of strife, up to and including war. Croft says they’ll typically last for centuries, and can involve nations, cultures, and faiths – as well as key individuals in the region where the struggle is located.

A key consideration for any character is whether they are ‘involved’ in the struggle or not. Involved characters have some important stake in its outcome, and Crusader Kings III gives them bonuses when it comes to dealing with struggle-related matters – the reasoning being that they have a grasp of the nuances and subtleties of the situation that an uninvolved person would not.

Characters can be involved or uninvolved in a particular struggle, or they can be an interloper – these are characters who are active inside a struggle region, but don’t really have as much skin in the game, and thus don’t have the same understanding of what’s happening that involved characters do.

Struggles have distinct phases that each reflects a different temperament within the region of the struggle. Each phase produces effects, like rules or character modifiers, while it’s active. Phases change as catalysts are active, and these catalysts can be anything from two characters falling in love or some notable person being executed. Each of these events adds points to a phase meter, and when a set threshold is met, the next phase of the struggle will begin.

Paradox says struggles can’t be resolved “just by painting the map.” Instead, rulers will have to make ‘ending decisions’ to put the centuries-long conflict to rest. These decisions will often have difficult consequences for everyone in the region.

Struggles sounds like it’s shaping up to be another sea change in the way Crusader Kings III is played, and Croft says it’s all going to be available for modders to tinker with once the 1.6 update arrives. It opens up some fascinating possibilities for future DLCs, as well as for ambitious modding projects such as The Lord of the Rings: Realms in Exile and Shogunate.