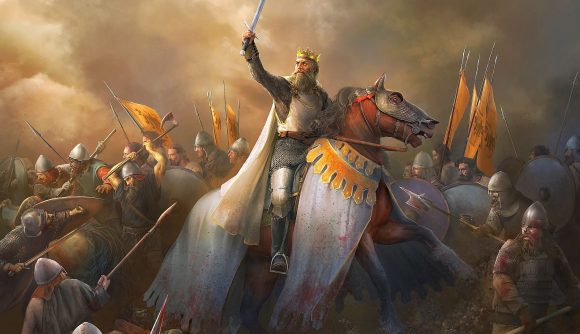 The trouble with getting into Crusader Kings II was knowing which bits of it you needed. Even after going free to play, Paradox’s big medieval grand strategy game offered more than $300 USD worth of DLC – expansions, flavour packs, and unit packs making up a daunting list of potential add-ons. Now you can have it all for the cost of a monthly subscription.

Paradox has been talking about moving to a subscription model for its in-house strategy games for at least a year now, and it seems the company has kicked things off today with the Crusader Kings II Expansion Subscription. For $4.99 USD / £3.99, you get 30 days of access to all the Crusader Kings II DLC ever released – that’s 13 major expansions like The Old Gods and Rajas of India, 12 unit packs, 14 music packs, 10 portrait packs, and the game converter that lets you move your save from CK2 to Europa Universalis IV, and the Ruler Designer.

“With so much additional content available, the cost for new Crusader Kings II players can seem prohibitive or intimidating”, Paradox says on the subscription’s Steam page. “This is an affordable way for players to experience the entire Crusader Kings II catalog without having to weigh which items they would prefer to purchase.”

It’s certainly a great opportunity to get acquainted with the Crusader Kings II landscape and work out which parts of it you like the best. Rather than signing on indefinitely, we reckon a good approach would be to get a 30-day pass, then use our Crusader Kings II DLC guide as a blueprint for trying out the stuff that seems most interesting to you.

Once you’ve gotten a chance to experiment a bit, you’ll be able to figure out which parts you want to keep around and which you’re less interested in.

Of course, the new hotness is Crusader Kings III, which modernises the core experience significantly. It’s still early days for the third game in the series, though, and there are some truly weird and surprising twists and turns to be found in Crusader Kings II DLCs, particularly in some of the later packs.