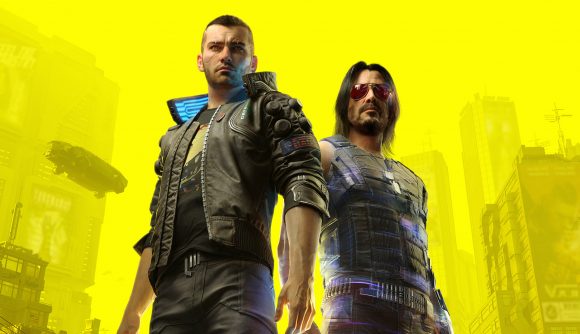 Last week, a Cyberpunk 2077 update introduced a game-breaking bug for some of the RPG game’s players, with reports of a significant hiccup affecting progress following a holocall with character Goro Takemura. Now, however, players across all platforms should hopefully find the issue’s been fixed, with the launch of a new hotfix today.

“Hotfix 1.11 is available on PC, consoles, and Stadia!” developer CD Projekt Red announces on Twitter. “This update restores item randomisation and fixes a bug which affected some users’ holocall with Takemura in Down on the Street quest.” As you can see in the notes, the hotfix is just that – a band-aid targeted at just a few of the open-world game’s aspects, but it means that players who encountered the game-breaking glitch can look forward to moving past their endless chat with Takemura.

The glitch occurred for some players during said call, CDPR explains in the notes, if they were using a save that was made during the game’s 1.06 version while the relevant quest – Down on the Street – was in progress at a certain point.

If the save was loaded during the more recent 1.1 build, the call would “lack dialogue options and block interactions with other NPCs”. Gulp. But, that should all be fixed now.

Hotfix 1.11 is available on PC, consoles and Stadia!

This update restores item randomization and fixes a bug which affected some users’ holocall with Takemura in Down on the Street quest.

Additionally, the hotfix addresses another issue stemming from the 1.1 patch affecting item randomisation, which has now been restored to its previous state.

You can check out the post for yourself on CDPR’s site (linked above),  and be sure to take a look at our Cyberpunk 2077 weapons, Cyberpunk 2077 romances, and Cyberpunk 2077 characters guides if you’re looking for some more info on what Night City holds.