Looking for help beating bosses in Cyberpunk 2077? Night City is a dangerous place, and as you make a name for yourself on the streets, you’re guaranteed to butt heads with some big-name foes that could cause you more trouble than you’re used to.

These Cyberpunk bosses usually show up as part of the story, so we’ll warn you now that Cyberpunk 2077 spoilers await you below – proceed with caution. You can distinguish bosses from regular enemies by the yellow skull symbol above their heads – and if you’re playing on higher difficulties, they may pose a significant challenge. You’ll almost certainly find some bosses easier to take down than others, depending on your Cyberpunk 2077 build; but with the help of our bosses guide, you’ll come prepared to every fight.

The reward for beating these bosses isn’t just bragging rights; they frequently drop powerful legendary Cyberpunk 2077 weapons or Cyberpunk 2077 gear – precisely what they drop appears to be random, but they’re guaranteed to be top-of-the line. Here’s how to defeat the Cyberpunk 2077 bosses we’ve encountered so far: 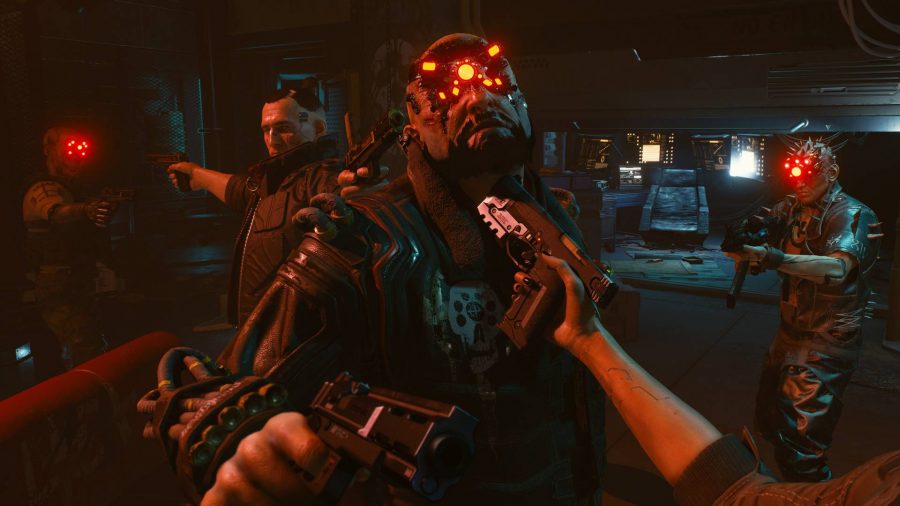 You’ll fight Royce as part of ‘The Pickup’ quest. In order to defeat him, circle behind him and shoot the battery on his back – this will be highlighted permanently if you’ve scanned and tagged him. We recommend using a shotgun or a tech weapon. Don’t bother attempting to dodge his attacks, as it doesn’t get you far enough away from him to miss. Instead, sprint around his sides and break his line of sight to you by using the pillars and other obstacles, or else he’ll kill you quickly.

Alternatively, you can blind him and then hide, approaching him from behind using stealth to perform a takedown and destroy his battery; at which point you can perform a second takedown to finish him off. 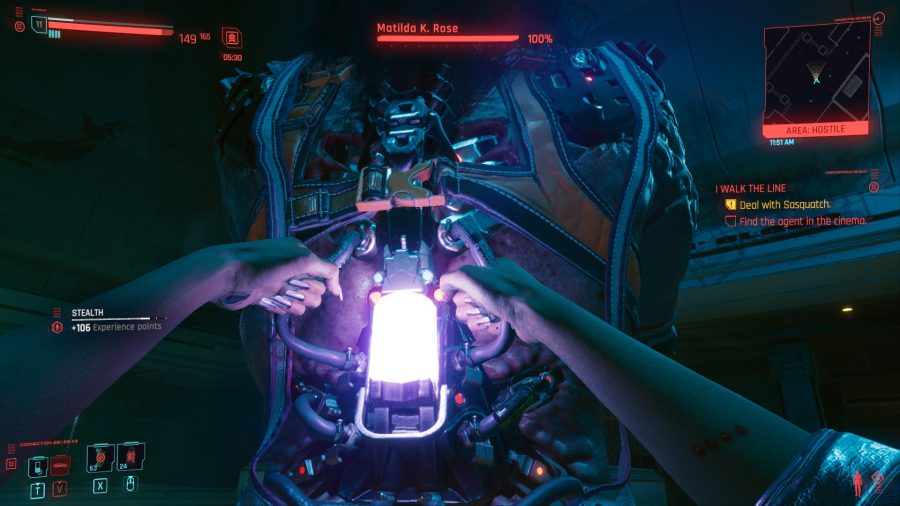 You meet Sasquatch while working for Placide in Pacifica. If you engage with her head on, she whips out a huge hammer and does some serious damage. The stealthy approach works best here; if you can sneak behind her and perform a takedown, this will remove 25% of her health and remove the juicer on her back. It’s tricky to move behind her unnoticed; we suggest sneaking all the way around her back and coming straight at her from her blind spot.

After the takedown, you can perform a second takedown to finish her off, or continue to fight; she’ll be using her fists instead of the hammer, which makes her much easier to take down. If you linger too close to her, she’ll charge at you and grab you, at which point your cyberware will experience remote interference; if you fail to defeat her before the countdown ends, you’ll flatline. Stay at range, dodge her melee attacks, and kite her as much as possible to take her down.

Oda is particularly tricky to beat. You don’t want to meet the business end of his blade, so be sure to stay out of melee range. Keep your distance whenever possible and use obstacles to avoid attacks – you can distance yourself by running into the little tunnels at the edges of the arena. Dodging won’t be as useful as sprinting away from him as fast as you can (not as cool, but necessary).

He has a cybernetic mask that stops your Smart weapons from homing in on him; destroy this first (you can do this by performing a stealth takedown after sneakily exiting combat) and then use Smart weapons to take him down. When he’s shooting his homing bullets, that’s when you’ll attack – the bullets hurt, but not as much as his melee. You can use an inhaler with a healing-over-time effect to weather these. When he goes into stealth mode to heal, take the chance to patch yourself up and reload, then run around and look for the telltale glow of his blades. Towards the end he’ll chase you relentlessly – there’s not a lot you can do about that, just keep healing and switch between all your weapons, hoping you do enough damage to force him to break away and heal, which he’ll do at around 10-15% of his remaining health. Then you can finish him off.

Smasher can take a significant beating, and he’s incredibly powerful – but he has a weak spot; the cybernetic heart on his chest. You’ll need to destroy his armour to shoot his heart unless you have Tech weapons. During the first phase of combat, Smasher will use both melee attacks and a ‘bullet storm’ – avoid these as much as you can. He’ll be still for a moment after his powerful jump attack, which is when he’s most vulnerable to attack.

Once you’ve brought his health down, he’ll call in reinforcements, which you should take out as soon as possible – use Ping to keep track of where they all are. Once you’ve sorted these out, avoid Smasher’s missiles and keep attacking – he’ll eventually enter the third phase, where he’s vulnerable to being taken down.

The stealthy approach – exiting combat by distracting or blinding him – also works here; you’ll do a huge amount of damage with every stealth takedown you’re able to perform.

These are all the Cyberpunk 2077 bosses we know of. If you’re looking to secure yourself the edge in combat, check out our Cyberpunk 2077 quickhacking guide – or if you need to concentrate on maximising your framerate, see our guide to the best Cyberpunk PC settings for performance.