If you’re about to begin your journey in this RPG game, but want to extensively plan how your character will shape out in Night City, there’s a lot to think about. First, you have to choose your Cyberpunk 2077 life path, and there’s also detailed character customisation, as well as a long list of Cyberpunk 2077 perks to choose from once you start to level up in-game.

Not only that, but there are all kinds of builds to consider as you start investing points into different attributes. This opens up a myriad of choices and endless amounts of builds for your playstyle, such as a sneaky corporate official or a direct, melee heavy nomad.

To build your character you start with a number of points which you can allocate to attributes, these include:

There’s also an empty section at the bottom where a sixth attribute would go… if it existed. We don’t know what this could be yet, but will keep you updated as soon as we find out. 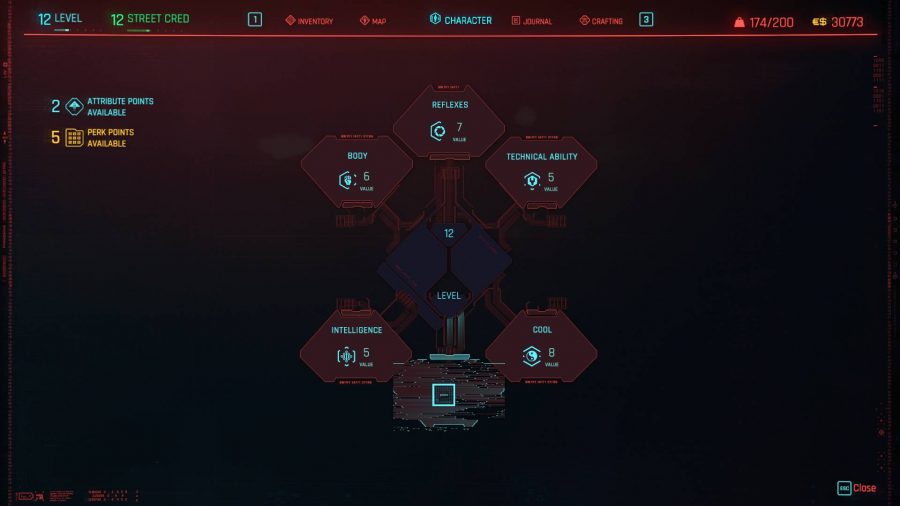 Every time you level up throughout the game, you’ll receive a perk point to unlock Cyberpunk 2077 perks. Every three levels, you’ll earn an attribute point to improve one of the attributes above. You can also level up individual skills – like quickhacking, handguns, and stealth – by using them frequently.

For this Cyberpunk 2077 build, you need to invest in body and intelligence for a high damage-dealing build. Thanks to the body attributes you’re able to withstand a great deal of damage, and can pack a punch with melee abilities. Although the danger in this build is that getting close to your target can result in being shot at, a lot. Luckily, the hacking abilities from intelligence means you can apply damage-over-time-effects on enemies using quickhacks to create small windows of opportunity to rush enemies.

If you’re not a fan of hacking, then you can install a Berserk module – an active ability that ups your survival capabilities, making you invincible for a small amount of time. This only works if you commit to raging into a room full of enemies and clearing them out by getting up close and personal.

Here you need to invest in reflexes and cool attributes, which focus on stealth, silent kills, throwing knives, and poisoning enemies. Although if close combat does arise, use your blades accordingly. To really double down on the stealth, invest in Breach Protocol to hack cameras and turrets in the immediate vicinity – or for a more aggressive touch to this build, equip the Mantis Blades.

If you want a purely damage focused build, that also operates in the netrunner class specialties, this hybrid build stacks critical hit chances using a legendary daemon – the Short Circuit – a daemon which has a passive bonus activating the Short Circuit whenever a critical hit is scored. This way you don’t have to fall back on your hacking abilities and can instead focus instead of high crit chances and accuracy to take down enemies.

A personal favourite, this build allows you to blast through walls and cover, but also remain a comfortable distance from enemies. By investing in reflexes and technical ability, you can specialise in tech revolvers, which flush enemies out of hiding places, making it impossible for them to retreat to safety. It’s the perfect blend between slick and aggressive, but means you can’t miss and you need to rely on accuracy to carry this build off. You can of course equip Cyberpunk 2077 cyberware that reduces recoil and raises critical hit chance to improve the odds. Also invest in Cyberpunk 2077 quickhacks to wreak havoc on enemy locomotion and cyberware, to trap enemies in tough spots without an escape route.

That’s it for the best Cyberpunk 2077 builds, for more on this open-world game, check out all the Cyberpunk 2077 romances, as well as the best weapons for your build, and the locations for all the vehicles you can tear up Night City’s streets in. Of course, if you just want to tear up enemies using Johnny Silverhand’s pistol, then we have the location for that too.