Looking for the best quickhacks for your cyberdeck loadout? CD Projekt Red’s near-future open-world game is set in a city with tech running through its veins; more or less everyone is sporting Cyberpunk 2077 cyberware of some kind; from the lethal Cyberpunk 2077 Mantis Blades, to replacement eyes called optics; and this means pretty much anyone is susceptible to hacking and manipulation.

Quickhacks are a type of Cyberpunk 2077 hacking – you activate a quickhack by scanning and aiming at an individual or device, and then selecting a quickhack from the list – as long as you have the RAM for it. The RAM required to activate each quickhack varies depending on your level, your cyberware, or your chosen Cyberpunk 2077 perks.

Each cyberdeck comes with quickhacks pre-installed, so there are a few you can use in every situation. Your cyberdeck also has a number of slots for the quickhacks of your choice – these can be looted, earned as rewards, purchased from vendors, or crafted from crafting specs. You can occasionally obtain them by using the Datamine daemon, too – here are the best quickhacks we’ve found so far:

These quickhacks come pre-installed on your cyberdeck, and target devices such as computers, screens, and turrets. You’ll need to upgrade your cyberdeck to gain access to better device hacks. 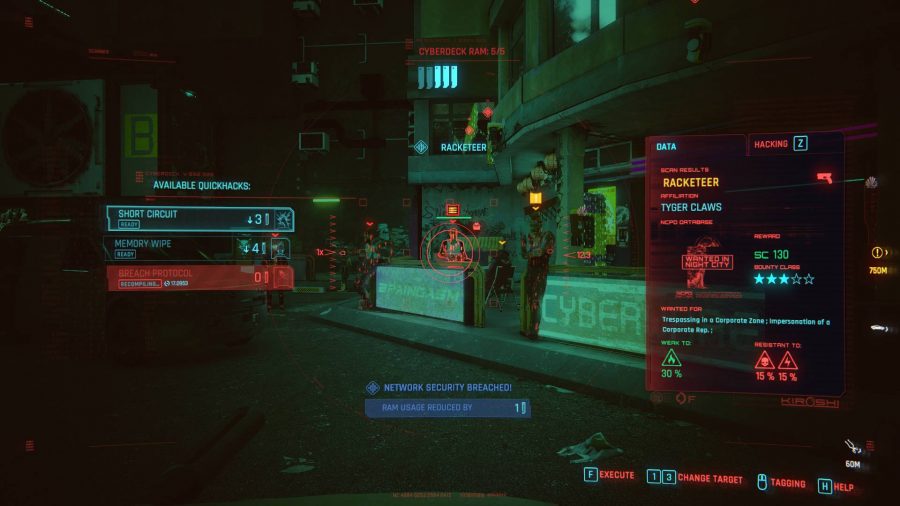 Antipersonnel quickhacks are activated by targeting an individual – your cyberdeck has dedicated slots to equip whichever quickhacks best suit your needs. They’re divided into three types; combat, covert, and control.

These quickhacks damage and debuff enemies.

These quickhacks are ideal for Cyberpunk 2077 stealth, allowing you to scout out areas and pass through them undetected.

These quickhacks are useful for dealing with large groups of enemies.

Those are all the Cyberpunk 2077 quickhacks we’ve encountered so far – but we’ll let you know if we discover more. If you’re looking for the most effective combat solutions, we suggest picking up a Cyberpunk 2077 iconic weapon – or even upgrading to Cyberpunk 2077 Mantis Blades.