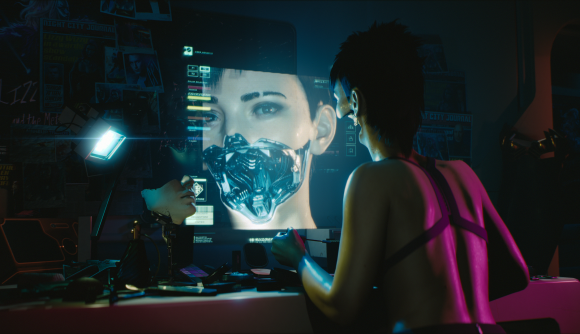 Cyberpunk 2077 finally has its rating from the US’s Entertainment Software Ratings Board, and while the ‘Mature’ label should come as no surprise, the rating summary does offer plenty of specific details on all the game’s naughty bits. And while, yes, we can titter once again about the game’s sex and nudity, the ratings summary also suggests a customisable approach to gender in character creation.

But first, let the ESRB talk dirty to you: “Players can encounter events where they have the option to engage in sexual activities with other main characters or prostitutes – these brief sex scenes (from a first-person perspective) depict partially nude characters moaning suggestively while moving through various positions. Some scenes contain brief depictions of thrusting motions; other scenes depict a character’s head moving towards a partner’s crotch.”

The ratings board also reveals that character creation will let players “select a gender and customize their character; customization can include depictions of breasts, buttocks, and genitalia, as well as various sizes and combinations of genitals”.

The idea of customisable genitals suggests that CD Projekt has taken the criticism of its transgender art and the binary gender select it showed in early gameplay footage to heart. Back at E3, CDPR said it wanted to include transgender character creation options, and late last year told VGC that there would be less binary options at gender select – though genitals would still be tied to masculine and feminine body types.

We’ll see how character creation works in full at the Cyberpunk 2077 release date, still currently set for September – perhaps it will even make the cut for our list of the best sex games on PC. In the meantime, we’re set for a load of fresh Cyberpunk 2077 news in June as part of a dedicated event from CD Projekt Red.