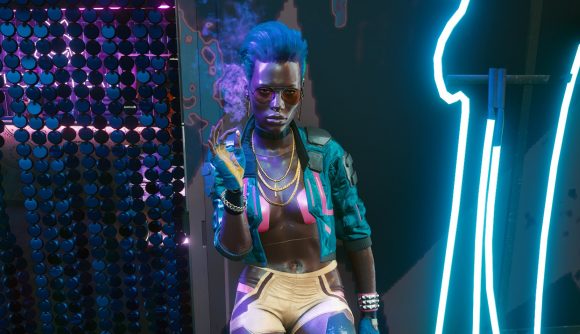 One of the neat things about the Watch Dogs series is that the hacking premise gives you the ability to pry into the lives of the people strolling around the city with you. That doesn’t necessarily change much about how you play the open world games, but it does give them a more real sense of being populated – and now there’s a mod to add that exact functionality to Cyberpunk 2077.

The Kiroshi Opticals Crowd Scanner, created by modders Alien and BadAssGodFather, uses chunks of descriptive text to procedurally generate backstories for every NPC in Night City, which you can read using V’s scanning function. In-universe, this is explained the way you’d expect in a Cyberpunk story – the InfoComp scanner trawls the ‘net and gives you a brief synopsis of a character’s childhood, their background, and any significant events in their life.

This isn’t done randomly – the mod considers a character’s appearance when it builds out their story. That means well-dressed Corpo types will typically have more affluent backgrounds, while characters in shabbier clothing will have life events listed that had negative impacts.

The mod is open for the creation of translations – you just have to edit the text.reds file in the mod to replace the English strings with your language of choice. Alien has helpfully provided instructions for using gender-neutral and gendered languages on the NexusMods page.

To run the mod, you’ll also need to install the latest version of Redscript, which is used to compile scripts for Cyberpunk 2077.

CD Projekt Red has released a first round of official modding tools for Cyberpunk 2077, but the bulk of them have yet to emerge. That hasn’t stopped modders from creating new content for the cyberpunk game, however – you can read about the best Cyberpunk 2077 mods right here.