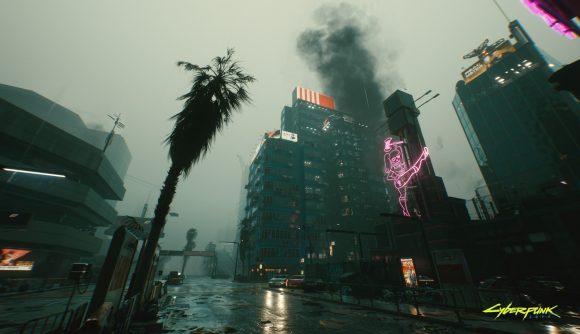 Part of the hype surrounding Cyberpunk 2077 is the tech that’s on display in the game. Players were impressed with CD Projekt’s use of available technology for The Witcher 3: Wild Hunt, and the expectation is that Cyberpunk 2077 is poised to push the envelope again. Nvidia has published a new post that details the ray tracing effects that will be on display when Cyberpunk 2077 finally arrives this autumn.

Nvidia’s partnership with CD Projekt Red goes beyond minting Cyberpunk-branded 2080 Tis – the companies are working to bring four separate ray-traced effects to bear in Cyberpunk 2077, as well as Nvidia’s DLSS 2.0, the deep learning technique used for upscaling lower base resolution images to higher screen resolutions, using an AI neural network to fill in the missing visual information and provide crisp-looking output. As a bonus, it even sounds very cyberpunk.

Cyberpunk 2077 will use ray-traced diffuse illumination, a technique for making big environmental light sources like the sun, moon, and electronic billboards light up the surrounding environment realistically, with naturally-coloured lighting.

You’ll also see ray-traced reflections, something you may remember used vividly in the Oldest House’s mid-century office settings in Remedy’s Control. In Cyberpunk 2077, as in Control, ray traced reflections show reflections of objects anywhere in the scene, not just what’s being rendered on the screen – so you’ll be able to look into windows and see the reflection of things happening behind your character.

Cyberpunk 2077 also uses ray-traced shadows and ray-traced ambient occlusion. Together, these techniques create far more realistic shadows in scenes than you’d be able to achieve with traditional shadow mapping.
The techniques are all, Nvidia explains, powered by DirectX 12 Ultimate’s DXR Raytracing API – and they’re eager to point out that they’re optimised for Nvidia’s RTX line of graphics cards. However, as we’ve seen, it’s not strictly necessary to own an RTX-branded GPU to take advantage of ray-traced visuals.

All that roughly translates into Cyberpunk 2077 being an amazing-looking game, given the right hardware to run on. If you want to know what it actually feels like to play, though, check out Jordan’s Cyberpunk 2077 hands-on preview, and get all the latest news from the first Night City Wire update from CDPR.