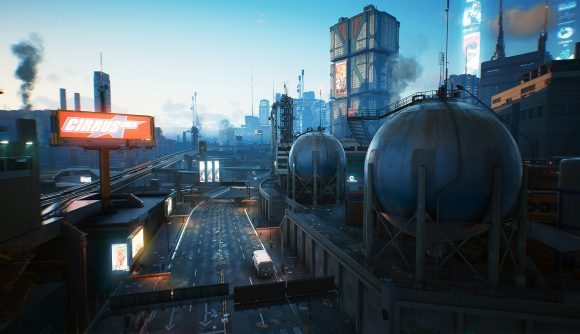 If you’ve been playing Cyberpunk 2077 and have periodically glanced skyward, you may have noticed the narrow monorails that intertwine with Night City’s elevated freeway system. It appears that these rails connect up with partially-completed train stations, which suggests a transit system once existed and was at some point cut from the open-world game.

As spotted by NME, Redditor u/Sybekul posted a clip from Cyberpunk 2077 showing V high above the city on the unused monorail lines. In the clip, V rounds a bend on the track to the platform of a Night City Area Rapid Transit (NCART) station and goes inside through a working door. Inside, there’s some rudimentary architecture, but the space is clearly unfinished – you can see through the ceiling, for example, and most of the floors and scene decorations are missing.

Two years ago, another redditor posted a recreation of a Night City metro map they had caught a glimpse of in one of the early Cyberpunk 2077 trailers, which further suggests that a mass transit system was originally part of the plan for the game – perhaps instead of the more magical (and, let’s face it, more convenient) fast-travel system present in the game at launch.

There’s nothing nefarious about cutting content during development – that’s the kind of thing that happens frequently over the course of a project. Some ideas just aren’t worth the amount of development time that would be necessary to fully implement them.

it looks like they planned on having a fully functioning train system but couldn’t finish it in time! from cyberpunkgame

While this is purely speculative, it’s also possible that the transit system will be used in the future. Prior to Cyberpunk 2077’s launch, CD Projekt said players could “expect more” DLC for Cyberpunk 2077 than the studio made for The Witcher 3 – and while the Hearts of Stone expansion stuck to areas familiar from the main campaign, the Blood and Wine DLC added the enormous new Toussaint zone.

So who knows: perhaps in a future Cyberpunk 2077 expansion, we’ll be whizzing around above the traffic in a retrofuture monorail car – although given Cyberpunk 2077’s corporate-owned dystopia, we can probably expect fares to be exorbitant if that comes to pass.