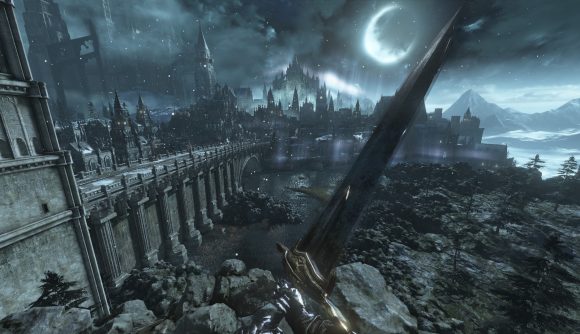 If you’d like to try Dark Souls 3 from a new perspective, you can play it as a first-person shooter with a combination of two mods. One turns the RPG game first-person, and the other adds modern firearms, so you’re well armed against any starved hounds or skeletons that come your way.

The first-person switch comes as part of this Challenge Mods pack, from modder ZullieTheWitch. which adds a bunch of modifiers for lighting, speed, and souls, so you can up the overall difficulty, alongside the first-person camera. The other mod is Modern Firearm, from forsakensilver, changing all crossbows into various kinds of FPS staples like SMG, sniper rifle, and AK-47. Put them together, and you have effectively turned Dark Souls 3 into Call of Dark Souls, or WolfenSouls, or Doom Souls, or insert-FPS-game-series-here-Souls.

Such alteration comes at a cost, however. You can’t roll out of the shooting animation, which means you might have to completely re-calibrate how you approach encounters, and shooting still requires stamina, so you can’t just blast a room full of undead knights with your newly-loaded artillery. The creator of firearms mod warns there’s no balancing on the guns either, so don’t expect them to feel like the latest Battlefield, either.

ZullieTheWitch actually pointed out the pairing on Twitter, sharing a video of the two mods in action together. If you’re a seasoned Souls-like player, the inability to dodge quickly is a little anxiety inducing when you can see those attacks coming straight at you. You can watch it here:

Things I found out today:
1. There’s a mod by ForsakenSilver that adds guns to DaS3.https://t.co/oKEtMTJqjA
2. It’s compatible with my First Person Mod.
3. It’s actually kind of difficult, since you can’t roll out of the firing animation and shooting eats your stamina. pic.twitter.com/BiWq8AL8uz

If you want to experiment further, Zullie’s challenge mod also includes a third-person camera, so you can potentially make Dark Souls 3 into something resembling Resident Evil 4. Another recent mod makes the original Dark Souls into a roguelike, and someone defeated the final boss of Dark Souls 3 using the DK Bongos controller, outdoing, or at least equaling, the use of Ring Fit Adventure. Always remember to mod with caution – especially given that Dark Souls 3 has a lot of online features.