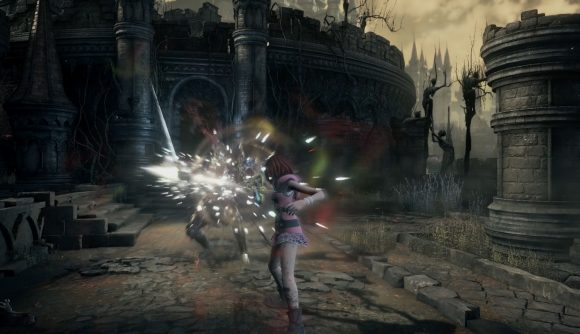 On paper, it doesn’t seem like there’d be a lot of crossover between the Dark Souls and Kingdom Hearts fandoms, but the internet is a strange place in 2020, and now there’s a mod that lets you play as Kairi from Kingdom Hearts 3 in Dark Souls III, with the character ‘worn’ as a kind of costume.

The mod swaps out the knight armour set with components of a Kairi model, so you’ll have to be wearing the complete collection of knight gear for the effect to work – that’s not all that tough to get your hands on, since you’ll start out with it if you play as a knight. However, the mod also replaces the ‘young’ voice for female characters with Kairi’s sound effects, so you’ll also get her voice lines in the game if you have or build a character with those attributes.

But wait, there’s more. This mod also includes two versions of the trademark Kingdom Hearts Destiny’s Embrace keyblade, which take the place of two Dark Souls 3 weapons. For Destiny’s Embrace (Attack Form), you’ll need to equip a normal longsword, and for Destiny’s Embrace (Magic Form), equip the Cleric’s Candlestick. The longsword is another easy item to find, but for the Cleric’s Candlestick, you’ll need to defeat the Deacons of the Deep, found in the Cathedral of the Deep, and then transpose their soul to create the hybrid weapon.

In its attack form, Destiny’s Embrace works for a melee build and comes with the Silvercat Ring’s featherfall effect. It’s a significant improvement over the longsword, with increased poise and better scaling with strength and dexterity.

The magic form of Destiny’s Embrace can cast any spell – sorceries, miracles, and pyromancies all work with this weapon. A normal attack will swing the keyblade, while a strong attack uses magic, and it uses Sacred Lothric Light as its weapon skill. While equipping it, you’ll have three extra attunement slots, so you can go nuts trying out new spells.

You can find the Kairi mod over on Nexus Mods, and you’ll need the DS3 Mod Engine installed for it to work. If you’re into either Dark Souls or Kingdom hearts, check out our list of the best RPG games for PC. There’s also a mod out now that turns Dark Souls III into a first-person shooter.