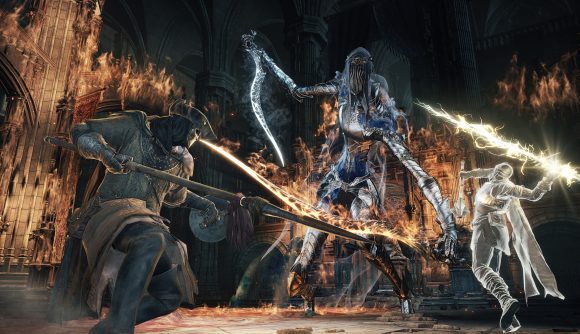 When you crack open the core rulebook for Dark Souls: The Roleplaying Game, you’ll have access to just about every piece of gear that appeared in Dark Souls 3, thanks to what the designers are calling a “genuine beast of an equipment chapter.” So if you like to rock the Black Witch armour set along with the Demon’s Scar, you’re probably covered with a set of stats and tables for each.

In an interview with our sister site The Wargamer, lead writer and designer RIchard August says that Dark Souls 3 was the jumping off point for most of the members of the design team, and that just about all the gear from that game has made its way to the tabletop version – which itself uses rules from Dungeons & Dragons Fifth Edition.

“Nearly every individual weapon, shield, and armour set” in Dark Souls 3 has been included in the chapter that covers gear, August explains. You can bet on seeing entries for notable items like the Black Iron Greatshield, the Farron Greatsword, and perhaps the Lothric War Banner – a spear whose attached skill rallies everyone beneath its banner.

August also says the TTRPG will cover just about all the enemy creatures in Dark Souls 3 in the bestiary, along with some returning friends from the original Dark Souls (those pesky demons who hang around in Anor Londo, perhaps).

Wargamer has more information on the upcoming Dark Souls roleplaying game, and it’ll be publishing the full interview with August soon.