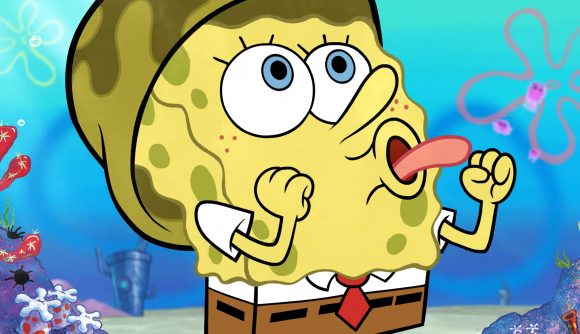 While licensed platformers have a bad reputation – a mostly deserved one – that hasn’t stopped fans from spending years asking for a SpongeBob SquarePants: Battle for Bikini Bottom remaster on HD platforms. When THQ Nordic secured the rights to its predecessor’s Nickelodeon games last year, that title was at the top of everyone’s wishlists, and now it’s officially happening.

SpongeBob SquarePants: Battle for Bikini Bottom – Rehydrated is coming soon to PC (and consoles). The announcement teaser is just a brief animated short in which SpongeBob dons a military helmet and announces his readiness, and we don’t yet know exactly what this release will include.

The full text of the press release is – I’m not joking – “Blblblblblblblblblb!!!” The official description on the trailer says that the game will be “faithfully remade,” and it will let players “join forces in a a brand new multiplayer mode.” The publisher says in a tweet that the game won’t be at E3, so we’ll be waiting some time for further information, including a release date.

You can watch the announcement below.

THQ Nordic has a handful of games to announce in the days leading up to E3. We know the publisher will showcase a new Darksiders at E3 2019, and other rumours have suggested that we could see a new Destroy All Humans and a new Red Faction.

Check out the full E3 2019 press conference schedule if you want to know where to watch all the announcements as they happen. Plenty of publishers are trying to get their news out early, so stick with us for all the new stuff over the next week and a half.