Dauntless Cells are effectively buffs that you can assign to your weapons and armour for powerful bonuses that will shape your build. You can get Dauntless Cells as random drops from hunts, opening up Cores, and a few other places that we’ll cover below. Farming Cells is hard work, so you’ll want to know the very best Dauntless Cells for your dream build – otherwise you may end up wasting time grinding for Cells you don’t even need.

Dauntless Cells may seem a little lacklustre when you first encounter them, however as you progress through the game and come up against tougher Dauntless Behemoths these become essential. The system can be a little confounding with several Cell types that limit where you can socket each one, plus a tier system that allows you to level your favourite cells in order to make them more effective.

Join us as we cover the best Dauntless Cells to add to your collection, show you the basics on how to acquire them, and walk you through the different Cell categories.

How to get Dauntless Cells

The main source of acquiring Dauntless Cells is by breaking open Cores at the shrines dotted around Ramsgate. You’ll acquire plenty of Dauntless Cores by completing quests, ticking off Hunt Pass challenges, and leveling up through your Mastery tree. They come in three flavours: bronze, silver, and gold. Cells can also be acquired from hunts as random drops and for completing certain hunt objectives such as breaking Behemoth parts.

As a beginner, the fastest way to grind Dauntless Cores is to race through your Mastery levels.Crafting one of each weapon type is an easy and organic means of racking up Mastery levels and farming Cores early on, as you can earn roughly three cores per weapon type simply by leveling your Mastery rank up to five. 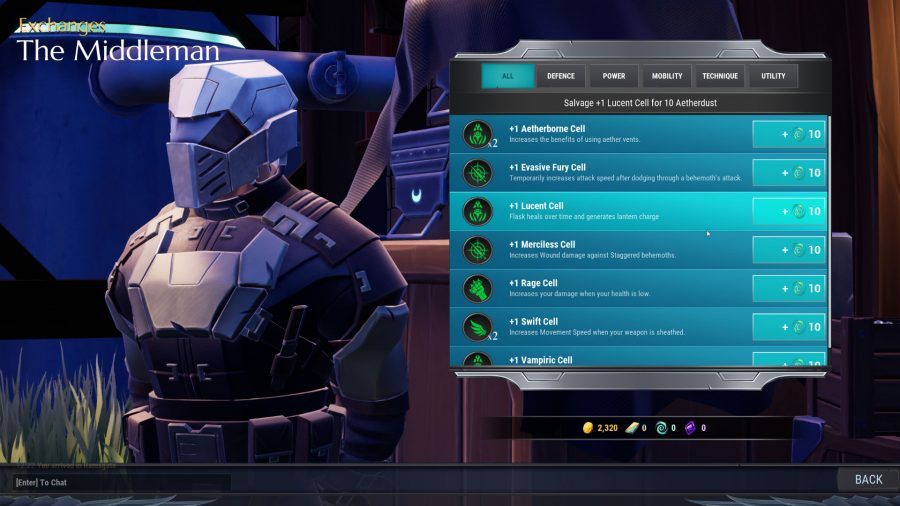 After doing this you’ll likely have a bunch of Cells that don’t fit your playing style, so head to the Middleman in Ramsgate to combine Cells to create higher tier versions. These will roll randomly, allowing you to potentially turn your junk into useful Dauntless Cells. You can also buy Cells off him for Aetherdust or premium currency – you can get Aetherdust by salvaging existing Cells.

What’s the difference between Dauntless Cells and Dauntless Perks?

There’s a subtle difference between Perks and Cells in Dauntless. Perks are the overall stats you’re aiming to change and can be maxed out at +6. A summary of your active Perks can be seen at the top right of your loadout screen and if you hover over each Perk you can see what bonuses are awarded at each tier. 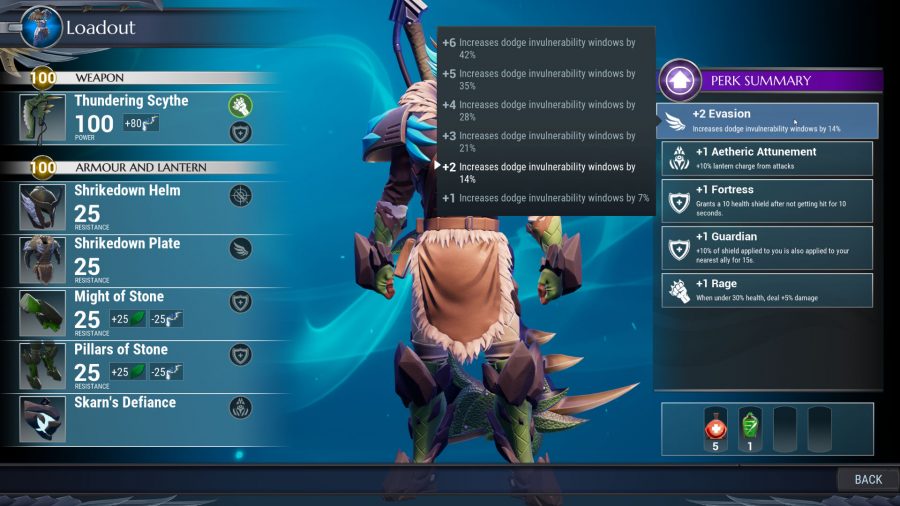 Cells, meanwhile, can be socketed into weapons and armour to buff those Perks. For example, if you have two +3 Rage Cells equipped then you’ll have a maxed out Rage Perk. Weapons and armour also carry Perk bonuses on occasion.

There are five categories of Dauntless Cells: Utility, Power, Defence, Technique, and Mobility. These can only be assigned to certain pieces of gear, which you can find out by hopping into your loadout and looking at the Cell options for your equipped weapon or armour. Making a good build in Dauntless is all about acquiring the best epic Cells and assigning them to weapons and armour so that you achieve as many maxed out Perks as possible.

There are three rarity tiers of Dauntless Cells too, green are uncommon, blue represents rare, and purple means epic. 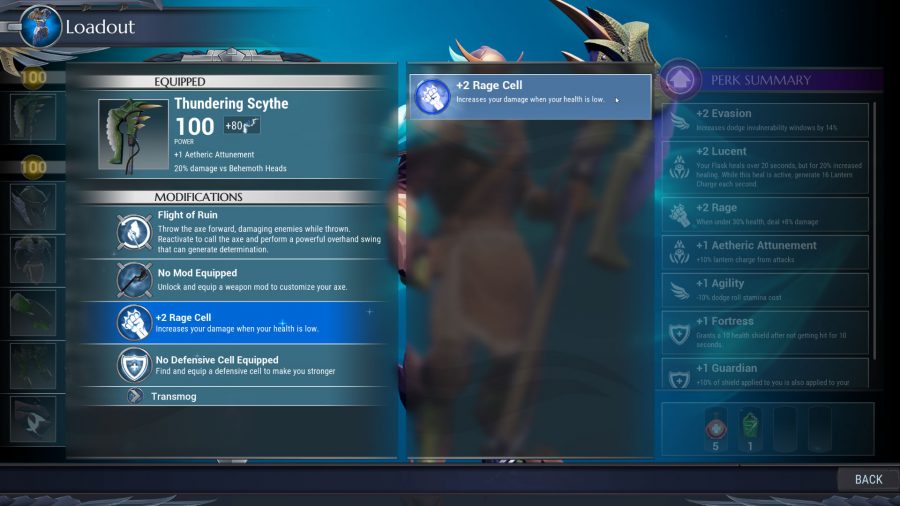 Onto the important bit: the best Dauntless Cells to get your hands on. We’ll only be covering the standout Cells in each category rather than listing every single one, so you can focus on getting the right gear.

Power Cells are all about dealing lots and lots of damage. Their effects are plain to see and as such many view them as the most important category to grind for.

This Cell maximises your effectiveness against staggered Behemoths, giving you +70% damage against a staggered foes when your Overpower rank is +6. This effect also triggers when you break parts or when a Behemoth attack is interrupted, allowing you plenty of windows to deal extra damage, especially if you have a good hammer player on your side.

This one is almost always handy to have maxed out. +6 Ragehunter will grant you +40% damage against a Behemoth in the Enraged state.

With Rage +6 you’ll deal an additional 25% damage when your health is below 50%. However, if the total Perk score is below +4 Rage is much less effective, so only stick to the max version.

These buffs range from changing your damage profile to buffing your raw damage, so it’s worth investing some time into getting the best Technique Cells in Dauntless.

Deal +35% damage when not hit for 15 seconds. If you’re nimble or simply good at timing those dodges then this is a great buff.

Very similar to Rage, this Cell grants +25% attack speed when below 50% health. Pair the two together and you can dish out a lot of damage while still having enough health to tank most attacks.

Your attacks will roll Molten Hearts, stack three of these orbs together within a 16 second cooldown and you’ll have immunity to fire damage and increased attack and movement speed. This is especially helpful when going up against fiery Behemoths.

Increase your damage against wounded Behemoth parts by +100%. This is a great all-round damage buff for quickly dispatching weakened enemies. You’ll want this is you use the war pike weapon, as it’s the only weapon type capable of dealing wounding damage. Alternatively, use the next Cell.

+15% critical strike chance – great for fast-attacking weapons like the chain blades or sword. The effectiveness of this depends on your raw damage stat though, so make sure to run this alongside Overpower.

These are pretty niche, so while they aim to help you tank damage, most aren’t worth speccing a build around.

Solid Cell for new players, increasing your maximum health by 500 and increasing healing from all sources by +50%.

One to run alongside Rage and Wild Frenzy, Iceborne decreases your damage taken by 30% when below 50% health. As a neat bonus, you get 8% lifesteal while this is active – this won’t ever put you over half health allowing you to keep all your other half-health Cells active.

These are all about stamina regen and dodging, but most of these are too niche to really base a build on.

Increase your stamina regeneration by +30, which is a nice evergreen buff. New players may struggle with this side of combat, so Conditioning is a Cell worth taking to offset that issue.

While sheathed, movement speed increases by +30% – this extends to nearby Slayers as well.

Increases movement speed by +35% for three seconds after dodging.

These change interactions with the environment and your Lantern.

Increases your Lantern charge by 50%. It also affects you attack cooldown from your Lantern, making it a solid all-round Cell to equip.

Using your Lantern hold ability grants all Slayers a +25% attack speed buff for 8 seconds. Deployed at the right time, such as when a Behemoth is staggered, this Dauntless Cell is lethal.

Strong potential, but not one for beginners. This Cell increases weapon charge rate by 40%, making it great for axe and sword users.

And there you have it – all you need to know about farming Dauntless Cells and Cores, plus the very best Dauntless Cells to equip to your build. Our favourite Perk combination is the Rage, Wild Frenzy, and Iceborne Cells, which will allow you to dish out absurd DPS without being so low on health that you’re in danger of being one-shot.