Building a 5-star connection with BB in Death Stranding isn’t as simple as you’d think. If you’ve seen Death Stranding ahead of the PC release you’re probably comfortable with the concept of a Bridge Baby, a jar-bound infant Sam uses to connect to the afterlife and keep BTs at bay.

In-game your BB is your best friend as much as everyone else thinks it is nothing more than ‘equipment’, so you want to treat it right. Achieving a great connection will net you an achievement too, so follow along with our guide to a 5-star connection with BB in Death Stranding and reap the benefits of a good paternal relationship.

Some of these tips are relatively obvious, but there are definitely some counter-intuitive parenting going on in the world of Death Stranding.

What do you get for upgrading your BB connection in death stranding?

Increasing BB’s star rating will make them less prone to high emotions when dealing with a BT. This means that it will no longer accrue Autotoxemia so quickly and will be more effective at detecting BTs. At five stars it becomes more difficult to lose BB when you’re mid-combat, so it’s a seriously worthwhile endeavour.

The quickest and easiest way to make a 5-star connection with BB in Death Stranding is to actually face danger and fight the BTs they’re so scared of. Escaping a BT encounter will always reward you with likes from BB which are crucial for improving your star rating. They seem to increase depending on how long you spend in combat with a BT or how hard the challenge of the encounter is. As well as getting them to notice you and quickly running away, simply stock up on enough grenades and blood bags to keep you alive once you enter a BT-infested area and make a route through the map to wipe out a few at a time. The game will force you to fight a number of BTs to progress – including some bosses like the giant BT, whale BT, and the Higgs boss fight – the campaign but a few extra battles on the side can’t hurt if you’re looking to hit the five-star rating. 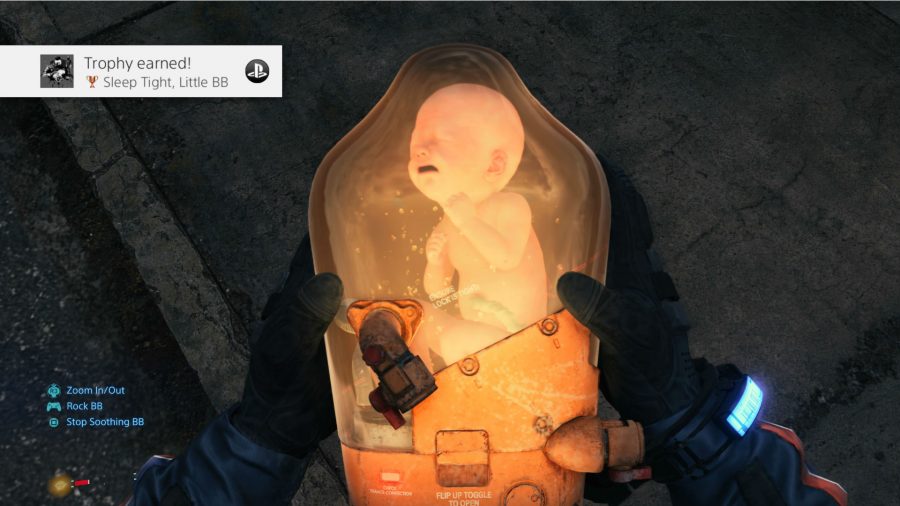 Make a habit in the Private Room

Whenever you land in the Private Room, make a serious habit of checking on BB in its casing on the far wall next to your suit. Simply soothe BB with the Square button to increase your connection rating every time you rest. For your trouble you may also see a special cutscene if you do it enough times… these ‘nightmares’ aren’t exactly soothing, so make sure you do it again if you trigger one.

BB also enjoys the simple pleasures, like seeing Sam run extremely fast and leap into the air with the Speed Skeleton. Once you get this piece of equipment to Level 3 you can run around the rugged environment and perform death-defying feats of acrobatics which will cause BB to giggle in delight at your daft endeavours. Strip all of your cargo off and just run around the map jumping and you’ll raise your star rating in no time. You can also recreate this means of achieving likes in vehicles by driving at high speed in an auto-paver energy zone and BB may reward you. Just make sure you don’t leap too far or land too hard. 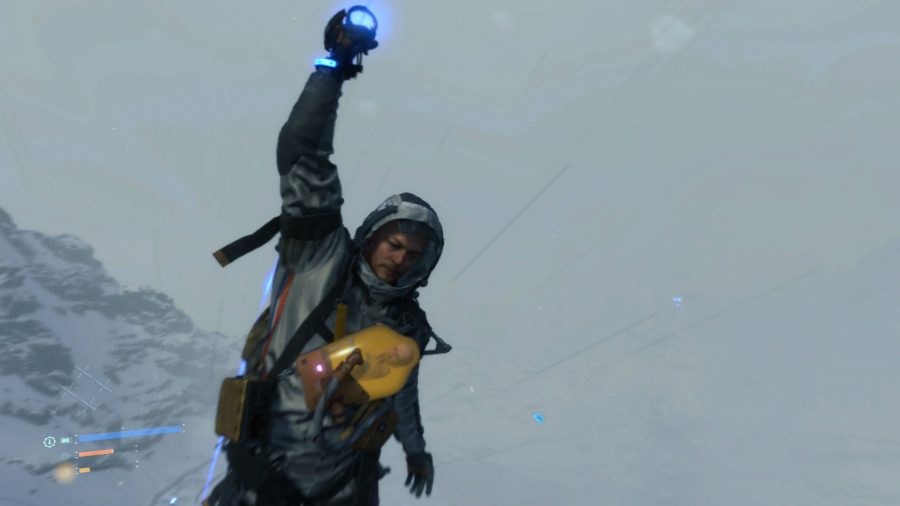 For some reason, BB gets a delightful kick out of soaring through the air on a zip line, so use one wherever possible when you’re delivering cargo and you should improve your BB star rating very quickly. As a more general tip, creating zipline routes through mountainous or snowy areas is by far the easiest way to get around. Trying to lug cargo through the damaging Timefall snowstorms on-foot or with a vehicle is extremely difficult. If you want to complete a high velocity of deliveries you’re going to need an efficient route, and given that it ties in with your BB star rating, bring a good amount of PCC’s with you on any trip and set them down to create waypoints that will make scaling mountains or crossing valleys very easy.

Bit of a simple pointer this one, but you need to watch out that you’re not falling from height often. Watch out when you’re running away from BTs and MULEs that you don’t fall off any cliff sides or steep drops. If you land hard this will stress BB out, and it’s surprisingly easy to worry it if you’re trying to scale or amble down a mountain when looking to reach a new prepper. There have been plenty of times where we’ve induced Autotoxemia by mistake just by falling, and every time you do so you’ll lose star rating with BB and be forced to head back to a Private Room to revive it. Simply put, don’t make ambitious jumps to try and save time if you want to keep BB happy. Do so in a vehicle and you should be fine. Similarly, getting shot by terrorists or harassed by Death Stranding MULEs will cause BB stress, as will wading into treacherous water. Where possible try a stealthy approach and use ladders and structures to cross environmental hazards. 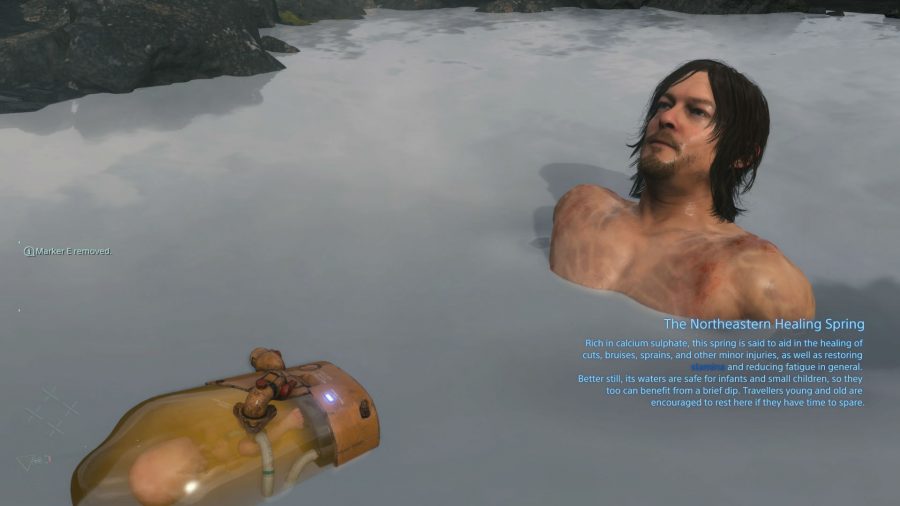 Bathe, soothe and learn the harmonica

Left of the valley you need to enter to get to Port Knot City in the Eastern Region is the Musician, a prepper who gives Sam a harmonica. At first you’ll be absolutely useless with it, but if you rest and tap the touchpad you’ll start to try and learn how to play simple tunes with it. These tunes will automatically soothe BB and afford you some quick star rating points if you need them. You can double up your soothing ability by seeking out one of Death Stranding’s onsens, essentially small bathing pools where you and BB can take some much needed relaxation time.

Bathing is a great way to get a 5-star connection with BB in Death Stranding, you’ll automatically receive star rating points, but tap the touchpad whilst there to use your harmonica or simply make funny noises with your voice and BB will respond in kind. You can also simply hold and rock BB by holding L1 and choosing the option to ‘Check on BB’ which will automatically bring it to full health and remove any stress caused by creatures or hazards.