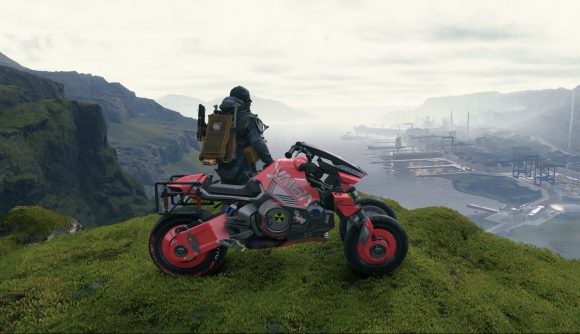 The free Death Stranding update, which weighs in at a hefty 34.5 GB on PC, adds a nice selection of Cyberpunk 2077 cosmetic options. There’s a red Night City-style skin for the reverse trike vehicle, which offers improved jumping power. You can also deck Sam out in Johnny Silverhand’s cybernetic arm, and give Sam his aviator sunglasses (that is, if you’re willing to give up Gordon Freeman’s distinctive specs). Sam’s face can also be changed to include those distinctive cyberpunky grooves that indicate extensive augmentation.

You can see the update in action here, courtesy of 505 Games:

As part of the all-new DEATH STRANDING x Cyberpunk 2077 PC update, there's an all new Hacking function that can be used in combat. Take a look…

Save 50% on #DeathStrandingPC for a limited time!

While most of the content in the update is just fun cosmetic stuff, the hacking abilities could legitimately change the way you play Death Stranding – we’ll have to see how well they balance out with the rest of the open-world game’s design.

In any case, it’s hardly surprising to see this crossover – we spotted Death Stranding director Hideo Kojima in Cyberpunk 2077 pretty early on, holding court in the hotel bar right before the first big heist.