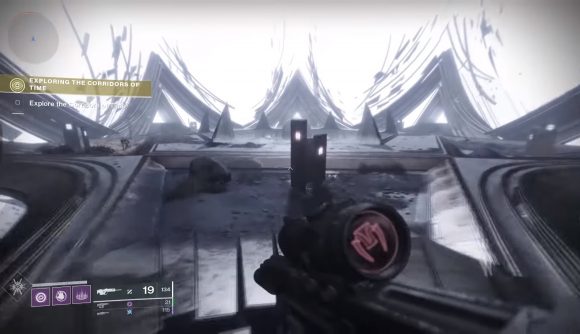 This week, a new quest appeared in Destiny 2. Osiris, the Vex-obsessed warlock who lives on Mercury, invited players to explore the Corridors of Time – a kind of intersection between realities and timelines that the Vex use to show up wherever and whenever they choose. Once inside, players have found one of the longest puzzles to ever show up in Destiny, and the community is still working out the solution in the hopes of revealing its ultimate reward – which remains a mystery at the time of this writing.

The Corridors of Time puzzle has several layers to it. When players first began heading back into the Corridors of Time, there didn’t appear to be any specific direction to travel in or activity to accomplish. But players soon noticed symbols placed around the chambers that corresponded to symbols displayed on the new obelisks that have appeared in the EDZ, Nessus, and Tangled Shore patrol zones. Running through the doors in the Corridors of Time in the sequences shown on the obelisks would take players to a room containing a vault, which contained a new bit of Destiny lore.

So far, so good. In those final vault rooms, though, players noticed changing patterns of hexagons and symbols – hints that there was more to this puzzle than a dozen or so new pages of lore. By matching up the symbols players saw on the floor in their runs, the community pieced together a map that revealed another sequence of eleven symbols. That sequence, in turn, would lead players to yet another vault room – and at this point, players all began seeing different images on the floor.

At this point, the puzzle becomes far too complex for any one person or fireteam to solve, and so Destiny’s puzzle-solving community has been busy compiling screenshots players have submitted, inputting the sequences of symbols they find into a master spreadsheet. That spreadsheet checks for matching sequences, and connects them to an ever-expanding new map that will, presumably, eventually reveal an extremely long string of symbols that will guide players to the final treasure hidden in the Corridors of Time.

Some players believe these sequences change daily or hourly, but what’s clear is that everyone can generate new map fragments that add jigsaw pieces to the puzzle and will eventually light the final path through the Corridors of Time. The map already contains thousands of individual images.

Bungie has delighted in adding opaque puzzles into Destiny 2, and the game’s raids often involve working out weird sequences of steps to perform in order to progress, but there’s never been one quite like this. The infamous Niobe Labs puzzle had to be simplified when Bungie realized it had neglected to include critical information for solving its puzzle a year ago, and only one team could end up winning the prize at the end of Warmind’s Valkyrie of Dawn puzzle in 2018.

This time, as streamer Say No To Rage points out, big-name streamers like xGladd are working out the solution alongside the community, with everyone adding information – and in some cases, pulling all-nighters to do so – to the dataset that will eventually provide the solution. That’s pretty cool.

We’ll have to wait and see what these dedicated explorers discover at the end of the Corridors of Time – if they discover anything at all. There’s no guarantee yet that they’re even on the right path. Time will tell.