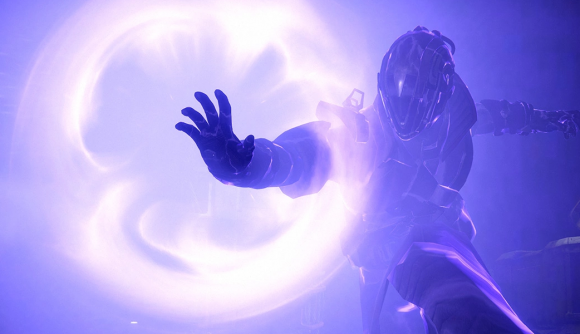 The Destiny universe has always had a lot going on beneath the surface. There are players like me, who mostly jump in to find new guns and shoot magical space monsters, but others have dug deeply into the lore, and a recent piece of dialogue introduced in the latest Invitations of the Nine quest, reinforces a theory that breaks the fourth wall and refers to the human players sitting on the other side of the screen.

GamesRadar+ has written up a quick primer on this fan theory that’s been kicking around the Destinyverse for the past several months. The basic idea is that the Emissary is aware that Destiny 2 is a game, and that she’s acting as a go-between for Destiny 2 players and the game itself, not just the Guardians and The Nine. There’s a new interaction between the Emissary and The Nine that points heavily to this, with the Emissary referring to a being that has “agency like you wouldn’t believe” and who can “leave this game.”

The Nine are confused by this, and the Emissary gives up trying to explain.

Redditor BC1096 says this all fits in with hints they’ve seen in Destiny 2 all along. Players can be thought of as gods who can never really lose the game, and entities in the game like the Ahamkara are aware of our existence. They want to leave the game’s plane of existence and achieve existence in our dimension.

Again, I’ve never been a Destiny lorehound – I’ve only ever been in it for the shooting stuff. But Rich reckons this is a pretty interesting theory, and it goes a bit beyond Destiny 2’s past pokes at the fourth wall.

Like any good fan theory, this one spiderwebs out with implications for a lot of the game. Maybe The Nine are some manifestation of Bungie? Is The Darkness the eventual end of the game’s life, perhaps the servers one day shutting down? What happens when Wish Dragons show up in the real world?

Maybe we’ll find out – well, at least we might find out about the first two someday. The Ahamkara are welcome to stay right where they are as far as I’m concerned.