Diablo II: Resurrected is out now. The original was one of the most important games of my childhood, but returning to Tristram feels weird right now, and not just because it’s been 21 years. Activision Blizzard faces two separate lawsuits, one alleging years of discrimination and harassment and the other alleging worker intimidation and union-busting, leading to employee walkouts and the departure of several key members of senior staff. A lot has happened so far, and the lawsuits are ongoing. You can follow the latest developments here.

Diablo II: Resurrected also faces pressure from fans burned by Blizzard's last remaster, Warcraft III: Reforged, which sprung a number of nasty surprises on players at its launch early last year. (The original Diablo II is still available on the Battle.Net store at the time of writing, so that’s something.) With all this in mind, how does Resurrected’s modern take on this iconic RPG game fare?

This remaster at the very least feels like the original; everything fits like a glove as I pursue the Dark Wanderer who is unleashing the forces of Hell on the people of Tristram. The same seven classes are still available, but old habits die hard, and for most of my time in Resurrected I stick with my aptly named old favourite, the Necromancer.

The Necromancer’s style is to raise an army of skeletons to do all the demon slaying while they sit back and control the flow of combat. Each of the other classes has its particular fantasy, and having dabbled in them all I can say that they are as distinct, well realised, and fun to play as they were back in 2000. 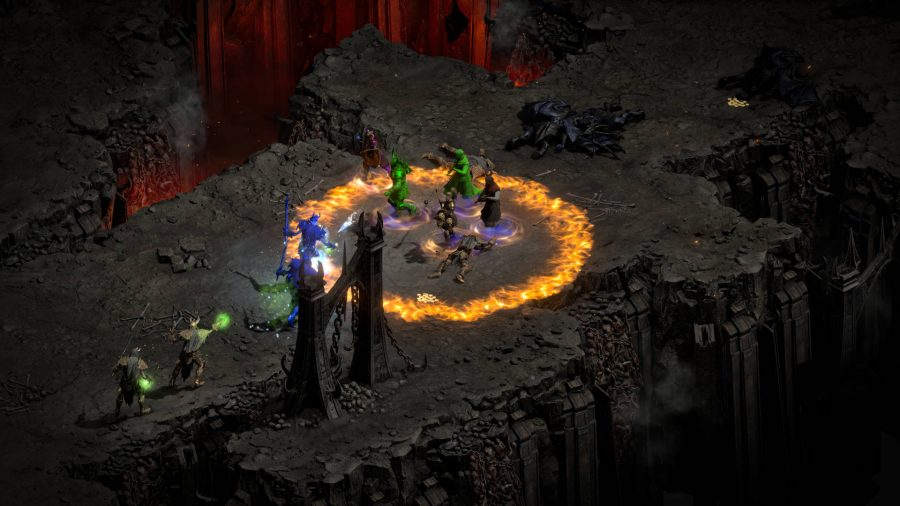 This is where Diablo II always excelled. Many of the action-RPGs that followed it have added more depth and complexity to the combat, whereas Diablo II remains simple to pick up and play, but it offers so many ways to build your chosen class that there’s endless power and variety as you do so. The visionary loot system gives plenty of reason to keep playing long after the campaign ends, chatting with friends as we mindlessly butcher the forces of Hell in search of rarer items. I never bothered with runes in my youth, so creating my first runeword in Resurrected is a thrilling revelation. All of the original’s strengths remain intact and are still relevant.

returning to Tristram feels weird right now, and not just because it's been 21 years

The remaster does change a lot, most apparently that it looks superb. This is a beautiful remaster that retains the spirit of the original Diablo II, but adds the definition and detail that my imagination had to fill in all those years ago. The overhauled cinematics now approach Blizzard’s modern standards – it’s far better treatment than Warcraft III: Reforged’s cinematics received. If you’re looking to play a bit of history with a few modernised tweaks, then Resurrected offers exactly that, and any medium-spec PC should be able to run it on high settings with ease. I do experience minor hitches when too many enemies are on screen, but that’s about it.

Modernising Diablo II has also given Blizzard a chance to make it more accessible than its first incarnation. There are a range of modes for different forms of colour blindness, and sliders for each of them so you can control the intensity of different colours. Similarly, there are options for the UI’s font size and text-to-speech toggles for the chat window. 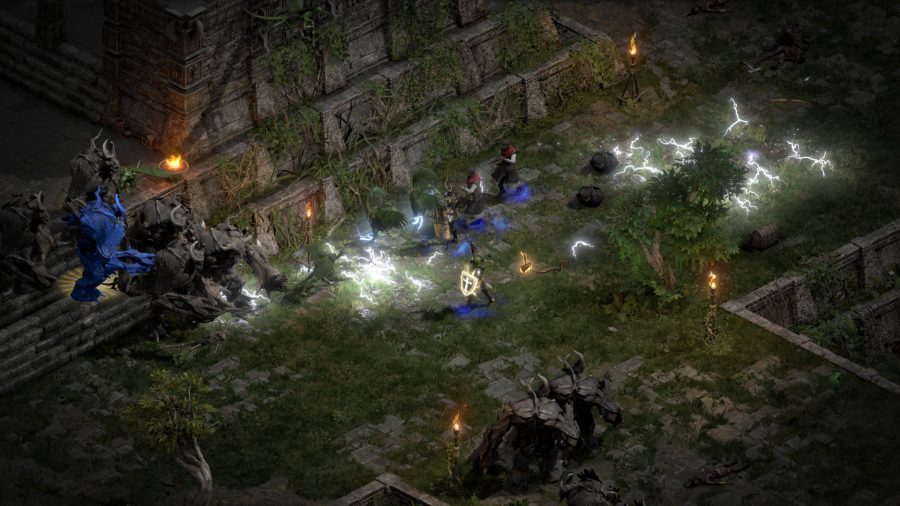 The redesigned minimap is smaller and more convenient, so the whole screen isn’t obscured whenever I need to check where I’m heading. Having three storage tabs in the stash for swapping items between characters is also a welcome addition. Some key sound effects are relatively quiet by default, so I appreciate that I can tinker with the audio sliders to hush the booming skills and amplify the quieter, but more important, audio prompts. There’s a new option to make big white crosses flash on the screen whenever you miss an attack, something my childhood self didn’t even know was possible due to the inconspicuous sound effect that is its default alert.

But by far the biggest boon for both accessibility and convenience is the array of customisable controls and keybinds on offer. Every single key can be reassigned on PC, so you can configure the game to a specific setup that’s comfortable for you. Resurrected is also compatible with both Xbox and PlayStation controllers. Those who can only play games with one hand with specialised controllers can configure the controls to suit their needs. I also tried an arcade fight stick and it works surprisingly well.

Shockingly, I think Diablo II: Resurrected is more comfortable and convenient to play on a controller than with a mouse and keyboard. Yes, I know. But before you reach for the pitchforks, I want to stress I find picking up items more difficult as a Necromancer main because of all the corpses I can potentially resurrect. The mouse cursor prioritises highlighting dead bodies over the trinkets and gear I can loot, and so with a gamepad I’m no longer hindered by an assumptive UI, as I can no longer target specific cadavers to turn into skeleton friends. This means spending far less time trying in vain to pick up a gem from a pile of slain monsters, something I’m very grateful for. 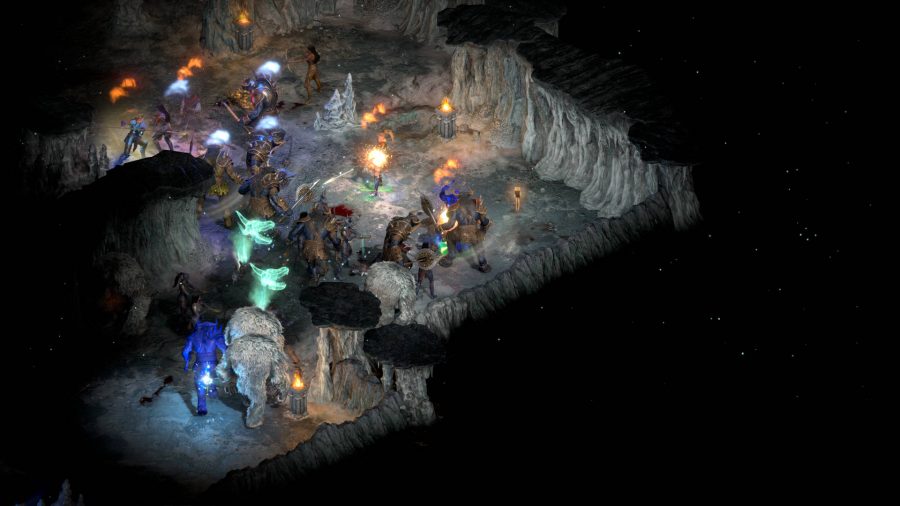 It’s aggravating and baffling, then, that all of this good stuff is undermined by what’s absent. There is no borderless window mode, and no ultra-widescreen options. It’s also no secret that Diablo II: Resurrected is missing TCP/IP support, upon which some existing multiplayer mods depend. Instead, Resurrected requires players to link a Battle.Net account to access online characters, play with other players, access cross-progression, and seasonal ladders. An inevitable step into modernity, perhaps, and further justified by Blizzard citing “potential security risks”. But for those who remember Warcraft III: Reforged’s similar withdrawal of support from existing ways to play, it’s bound to leave a bad taste.

More troubling still, it’s not like there’s been a lot of reassurance over mod support. Despite comments from lead producer Chris Lena back in March, which suggest mods will be supported, we’ve heard very little since, and there’s little sign of relevant functionality in the game right now. What with Blizzard’s changes on TCP/IP and private servers, and no clarity in Resurrected’s end-user licence agreement – because as of writing there isn’t one – this remains a huge question mark. We’ve been following up with Blizzard on this since launch and will update whenever we hear something substantial.

A final concern is over Resurrected’s post-campaign support. Seasonal ladders are at least listed, which let players play through the campaign with special rules and exclusive items, competing to reach level 99 as quickly as possible. They’re not available yet, so I can’t comment on how extensive they are, but they should add plenty of replayability. It’s unclear right now if the seasonal ladders will follow a similar pattern to the original Diablo II or if they’ll follow Diablo III’s format. 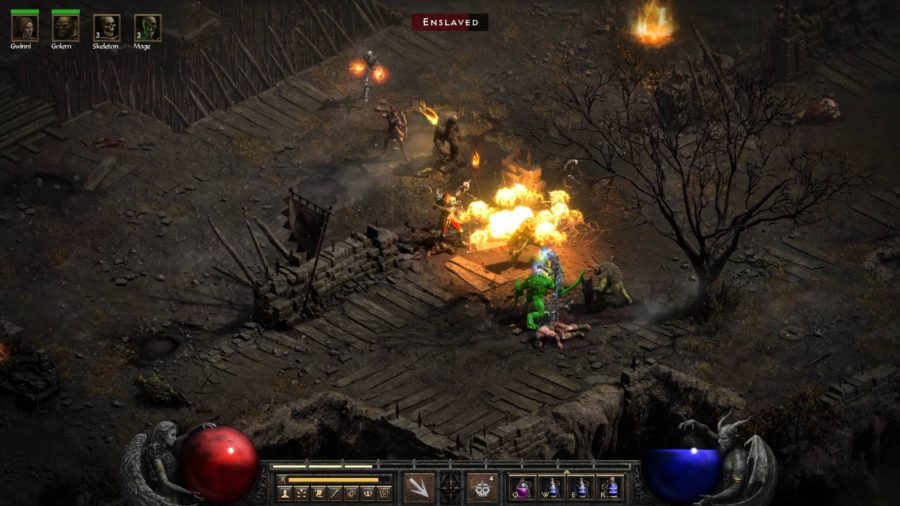 So Resurrected is far from perfect. The new accessibility options are welcome and improve the experience for everyone, but there’s not much here that goes beyond the industry baseline. Gaps also exist in its list of features, and some of these gaps are worryingly similar to those that plagued Warcraft III: Reforged.

But as a single-player or co-op experience, Diablo II: Resurrected is a fantastic way to play one of the definitive games of the action-RPG genre, with splendid updated graphics and quality-of-life features. It’s an acquired taste, as are all ARPGs in its mould, but if you somehow never played the original, this is still one of the best games of its kind – as well as an essential piece of PC gaming history. 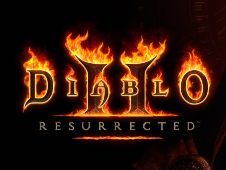 Successfully brings an icon into the modern era, and the underlying gameplay still shines. But while Resurrected does a better job than Warcraft III: Reforged, it leaves similar questions unanswered over its feature set and long-term community support.

8
Book of Adria: A Diablo Bestiary