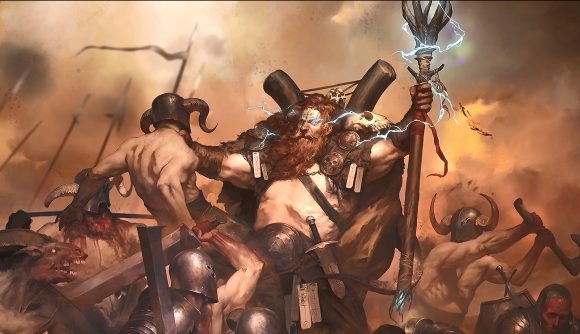 Diablo IV’s top-level gear will be items in the mythic category. Each of these powerful items will have its own traits, plus a selection of randomly-rolled legendary powers. The catch is that you’ll only be able to equip one at a time.

The limitation of one mythic per loadout means Diablo IV’s mythics function similarly to Destiny 2’s exotic items. In Destiny, you can collect exotic weapons and gear to your heart’s content, but you can only have one exotic weapon and one exotic piece of armor equipped at any given time. That’s generally how it’ll work in Diablo IV as well – mythic items can be weapons or other gear, and you’ll only be able to have one active on your character at a time.

At least to start out, these will be the strongest pieces of gear you’ll be able to get in Diablo IV. An example shown at BlizzCon this weekend during a Diablo IV panel was the Obsidian Heart, a mythic amulet and piece of Barbarian gear. The heart does 8% damage to enemies in melee range and adds +2 ranks of Blood Thirst intrinsically, but it also has four additional legendary powers, which are drawn from a random pool.

That means you could spend a lot of time grinding the same piece of mythic gear hoping to get the best possible legendary rolls for your character build. 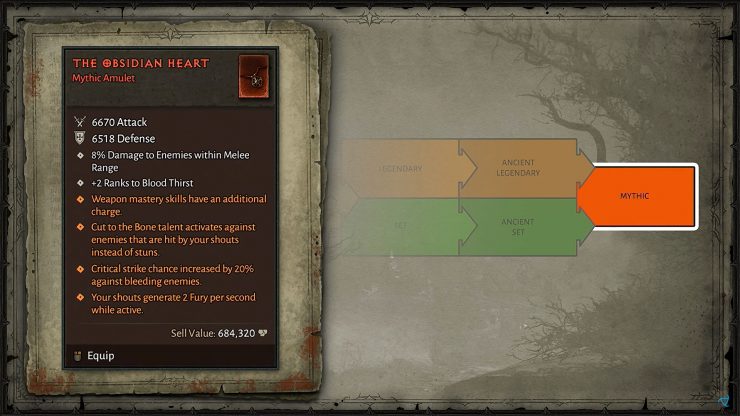 That might sound like a bummer if you’re not planning on sinking hundreds of hours into the next Diablo title, but it’ll likely function the way Destiny 2’s exotic masterworks do. Systems like these give more casual players a chance to pick up good gear, but the most dedicated players still have goals they can chase in the game.

You can catch up on all the latest Blizzard info with our extensive BlizzCon news roundup.