Disney is everywhere nowadays. We have the Disney+ streaming service, Disneyland with its Galaxy’s Edge Star Wars section, the Disney channel long past its glory days, and countless other offerings including the likes of Star Wars and Marvel Entertainment. You can’t look anywhere without seeing the grim silhouette of the mouse looming over all your entertainment options.

And while game adaptations of Disney are increasingly uncommon, with Disney closing their in-house game development studio in 2016, there are still plenty of Disney games on PC you can dive into.

Ranging from classic 90s click-based adventure games all the way to big-budget sandbox games, if you’re looking for a Pixar or Disney character in video game form, there will be something here for you (whether you want to play as the Incredibles or visit the world of Treasure Planet). All of the games featured below are available on many of the PC storefronts, so don’t fret about downloading mods or finding any emulation tools in order to play. 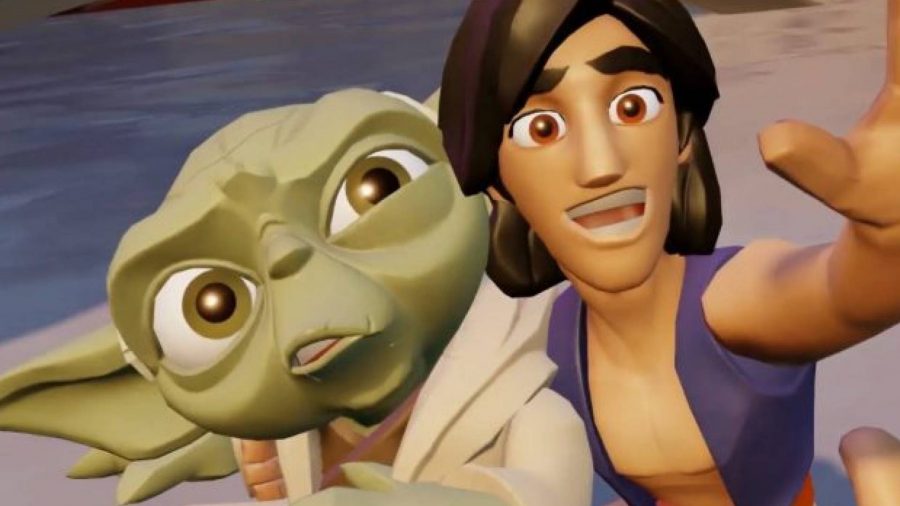 Disney Infinity, over the course of three games/toy boxes, has included 118 characters from across the Disney multiverse. You can squad up with Groot, Lightning McQueen, Maleficent, and many more before stomping around the games’ varied levels and modes. There aren’t many other experiences that can provide that type of variety in franchises.

That variety extends across Disney Infinity’s gameplay, too. There are platforming and exploration bits, racing segments, mini-games, and even a game creation mode. Even though Avalanche Software, who was shut down by Disney and then reopened as a Warner Bros. game studio, no longer works on the series it’s still in good shape. You can’t actually use the figure packs on PC due to it not working with the base that scans the figurines. Instead, you can use codes found on several online stores like Amazon. You can also jump over to some Disney Infinity forums and subreddits to trade character cards with other players.

It’s an enjoyable casual experience for anyone with kids or the desire to play at a slower, more relaxed pace. 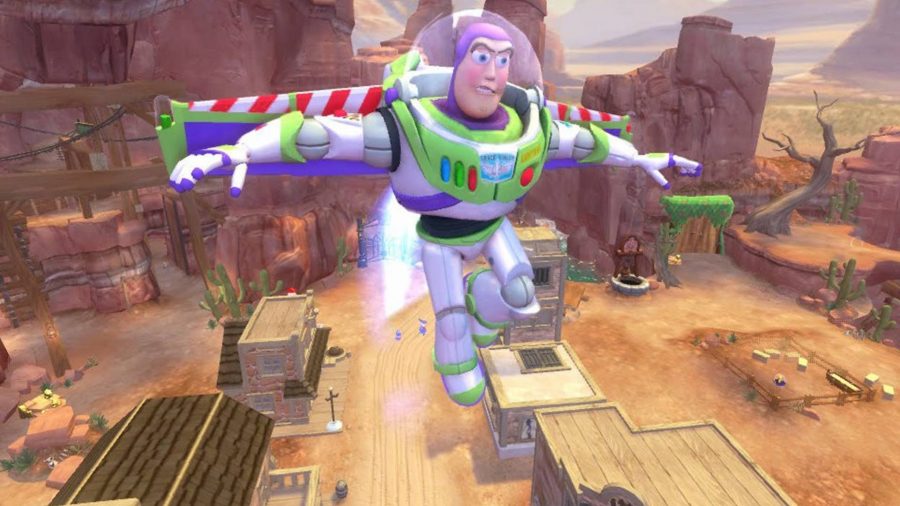 Toy Story has had some of the best game adaptations throughout its long history. The game versions of Toy Story 1 and 2, even though not available directly on PC, were absolutely fantastic platform games that pushed the technical limitations of the consoles they were on. The more recent Toy Story 3 is bigger and better.

The adaptation for the third tearjerker launched on basically every platform available in 2010 by the same studio who went on to make Disney Infinity. It features a lovely story that could put it up there with the best Western games, except you get to play as key characters like Woody and Buzz Lightyear.

The story mode is mostly linear, with specifically designed missions laid out between visits to a hub world. The Toy Box mode gives you a lot of freedom to do what you want and offers a lot of different game types spread across different mini-games. 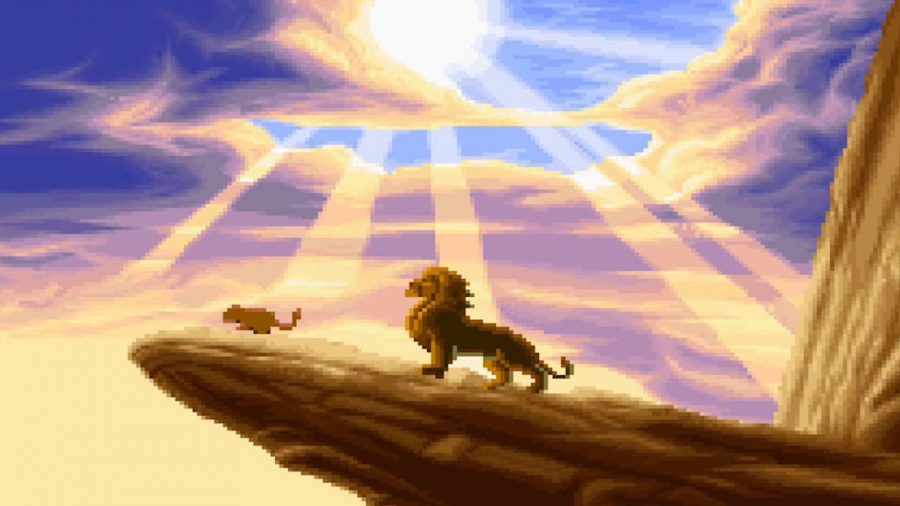 One of the original top dogs, The Lion King originally launched on the Super NES and Genesis in 1994. Now, 25 years later, it’s one of the most beloved Disney games ever made. It’s available as a double pack with the equally revered 1993 version of Aladdin on Steam.

Old school cool: Try out some of the best old games on PC

The PC version is tweaked slightly. The port doesn’t have the cheat codes from the original game and this version has a bit of lag. But if you played this Simba classic as a kid, or if you’re looking to play the best interactive version of The Lion King, then check this one out. It’s got all the charm (read: jankiness) of the original. Despite the ancient controls, tight jumps, and tough challenges in the 2D platformer make it worth a visit. 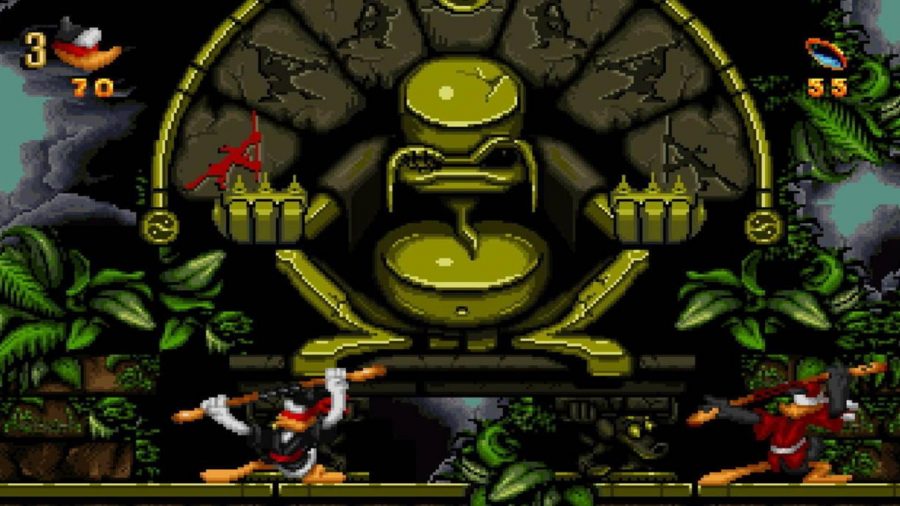 Donald Duck, who twilights as a Ninja on weekends, stars in this incredibly impressive 1996 Super NES and Genesis game. It’s currently available on Steam and it’s visuals and gameplay are still up to scratch by today’s standard. It’s another side-scrolling platformer with dark, purplish visuals to help capture the vibe of the Darkwing Duck.

It’s a lesser-known Disney gem but it’s worth checking out if you like Donald Duck more than any other member of the Mickey Mouse squad – plus it’ll earn you some serious hipster points. Developed by the now-defunct Disney Interactive Studios, Donald Duck plays the meta role of a duck detective Maui Mallard who can turn into a ninja named Cold Shadow. Throughout the games 23 levels, you can switch between the Duck’s two alter egos, each with a different weapon and approach to combat. The detective’s insect gun and the ninja’s bo staff, each with their own moveset. 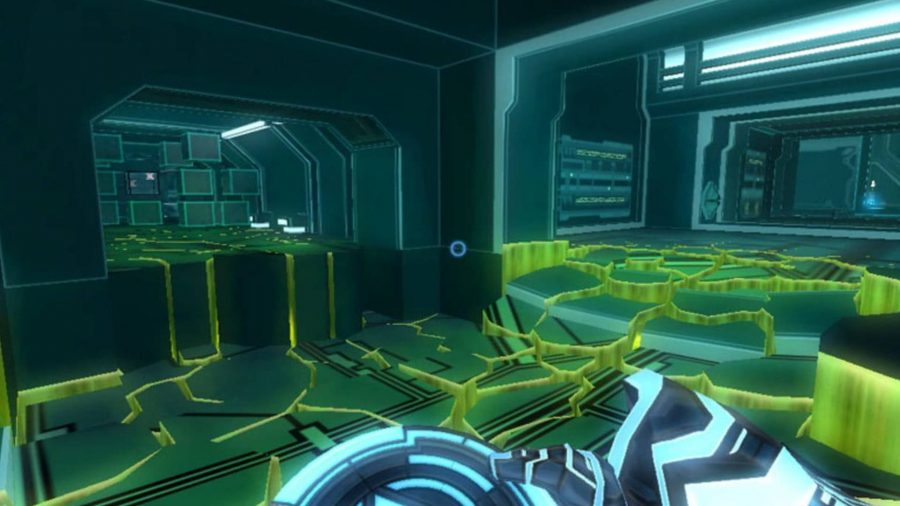 Developed by Monolith Productions, the studio behind the recent Shadow of Mordor and Shadow of War games, Tron 2.0 is a first-person shooter released back in 2003. It’s comprised mostly of gunfights with low-level enemies, boss fights, and the iconic light cycle races the Tron series is known for. It’s level and mission design, with its neon-lit bridges and deep chasms, emulate the feeling of the original film well. It’s even got two of the original actors lending their voices to it’s story campaign.

While the PC version was well optimized and hailed as the best choice when it originally launched, it’s best played with the Killer App mod today, it’s a patch mod that helps the game run smoothly. Tron 2.0 available on Steam. 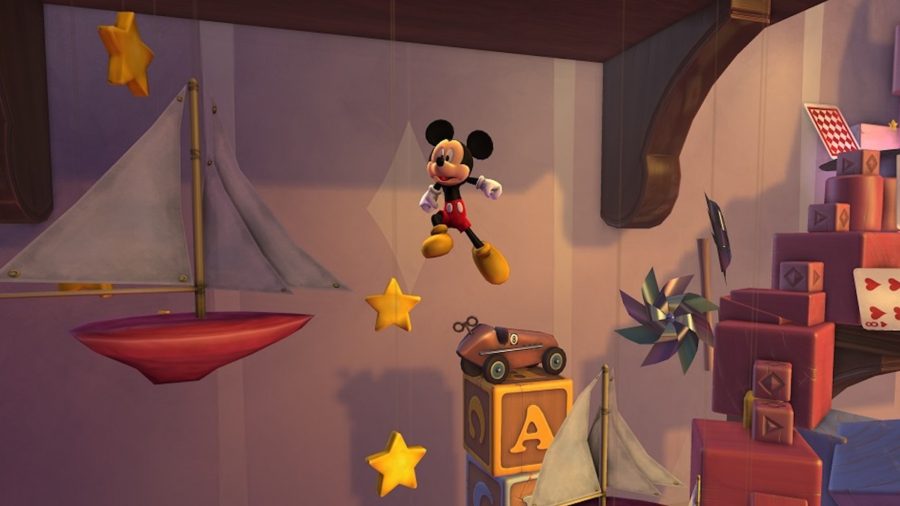 This 2013 remake of a 1990 Sega Genesis game sees Mickey on a side-scrolling platformer adventure to save Minnie from evil forces. While the original game had great visuals, a magical soundtrack, and feel-good gameplay, the remake takes everything and pumps it up a notch. The improved graphics work wonderfully with Mickey’s animations and music. It’s a fantastic platformer.

It was difficult to complete when it originally released almost 30 years ago, but you probably won’t see much of a challenge to it now. But it’s worth checking out on Steam if you’re a fan of Mickey Mouse, Disneyland attractions like Fantasmic, and classic Fantasyland Disney. 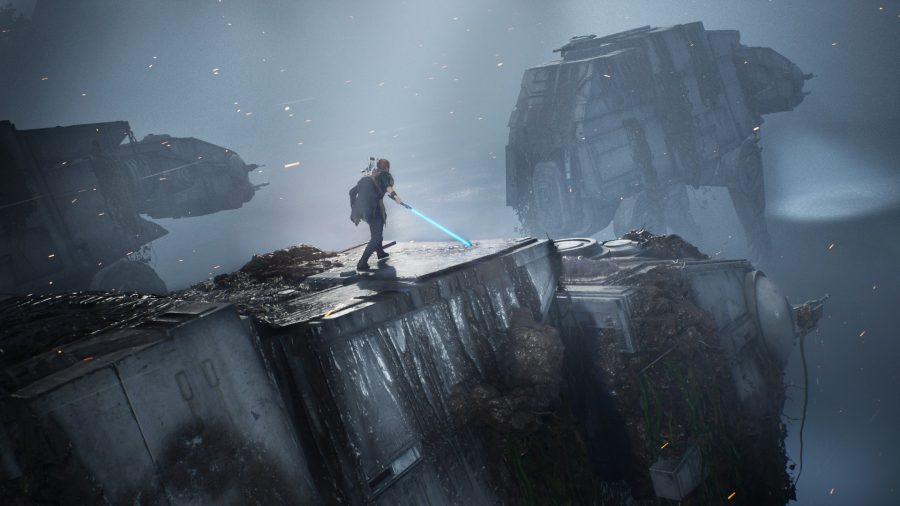 There are plenty of fantastic romps through a faraway galaxy, but we didn’t want to muck up a big part of this list with George Lucas’s stepchildren. Star Wars Jedi: Fallen Order, is the latest and greatest of the modern Star Wars games era, so it’s our chosen pick of the bunch. It’s got breathtaking environments, great combat, and a discount Hayden Christensen as a protagonist – what’s not to love?

Developed by Titanfall veteran studio Respawn, who also put out the excellent Apex Legends battle royale, Jedi Fallen Order has tight and responsive controls and some of the best Star Wars environments we’ve seen in games, from the Wookie homeworld of Kashyyyk with its thick jungle canopies, to the crimson rock faces of Dathomir. It’s got a lot of exploration, with multiple Metroidvania elements, not to mention combat inspired by Dark Souls precise timing and hard-hitting enemies.

Other Star Wars games to look out for are the original 2005 version of Star Wars Battlefront (the two new ones are not as good), Star Wars: Knights of the Old Republic, and Rogue Squadron. You can also check out our list of the best Star Wars games on PC. They’re all available on Steam. 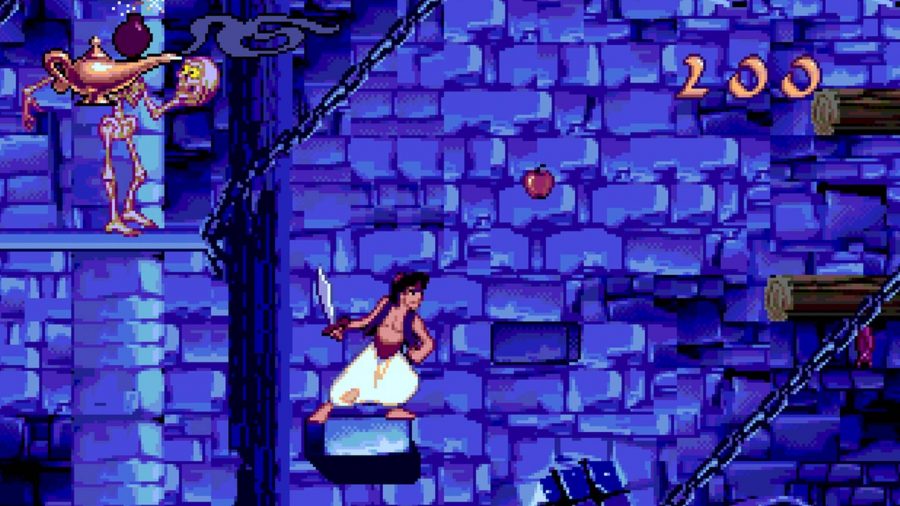 Like The Lion King, this classic 90s platformer shows Aladdin at his best. This version of Aladdin doesn’t feature Will Smith, DJ Khalid, or surprisingly enjoyable dance numbers like the 2019 live-action remake of the original film, but it does have challenging platforming sections, great artwork, and lovely animations reminiscent of Disney Animation’s style.

It is included in the 2019 remaster collection alongside The Lion King. Aladdin got more love this time around, with multiple versions of the game, including the portable version handled by Capcom, included in the collection that’s available on Steam. If you own a copy of Disney Classic Games: Aladdin & The Lion King, you’ll be pleased to know about the DLC that released at the end of 2021. You can purchase the Super Nintendo version of Aladdin, as well as the Super Nintendo, Mega Drive, and Gameboy version of The Jungle Book for £9.99 / $9.99. 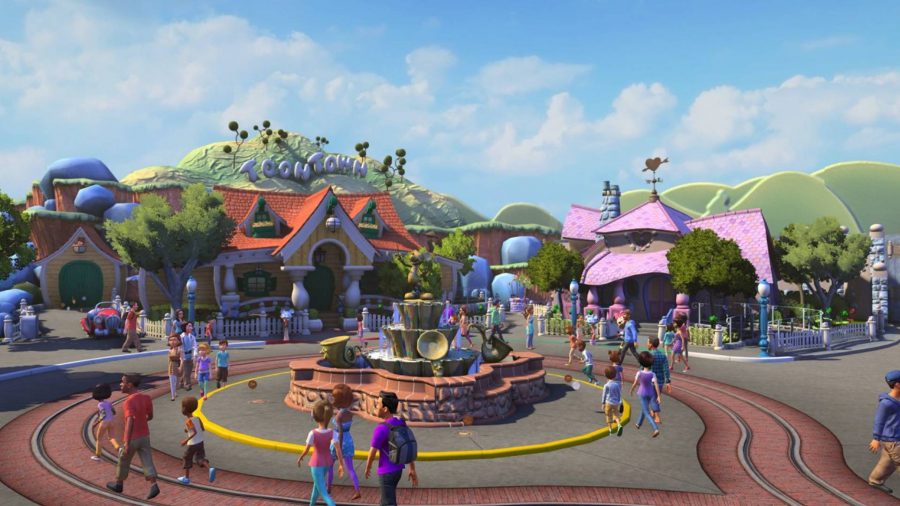 For those who visit Anaheim, California regularly, Disneyland is a tradition. As it’s gotten more popular (and way more overpriced) it’s only been tougher to take trips to the self-proclaimed happiest place on Earth. So instead of forking over hundreds of dollars to fly out, get a hotel room, and purchase theme park tickets, pick up Disneyland Adventures instead.

It’s an open-world adventure, originally developed for the Kinect, that lets you explore Disneyland and all the rides and secrets hidden inside. Several rides feature mini-games, including a simple rhythm game for the It’s a Small World ride, alongside character customization options as you explore the park. It’s available on Steam. 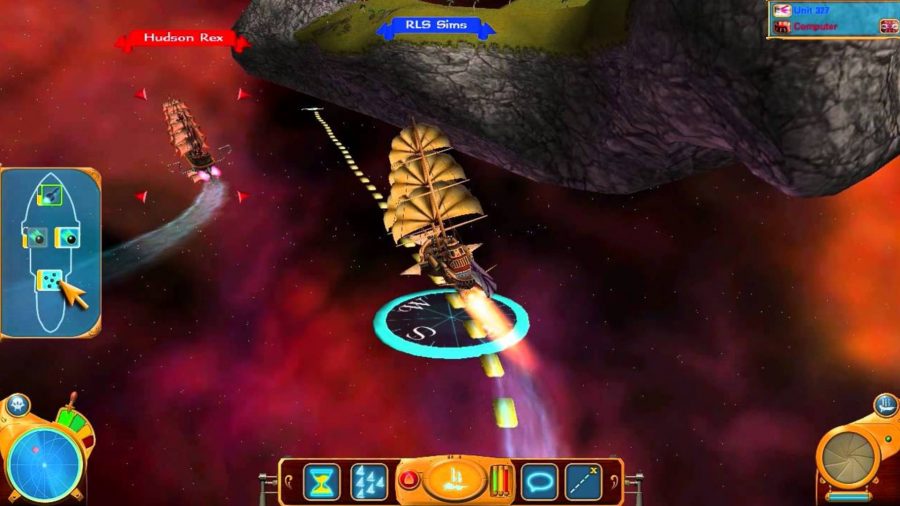 Treasure Planet is one of the greatest animated pictures that Disney has ever released and it’s a crime that we haven’t gotten a follow-up. If you’re aching to get into the world that hid the loot of a thousand worlds, then this is the follow-up game, Treasure Planet: Battle of Procyon, is an excellent choice in RTS form.

Developed by Barking Dog Studios and originally released in 2002, Treasure Planet: Battle of Procyon takes place years after the events of the movie. Jim Hawkins, the original protagonist, has grown up and joined the Navy. You control him through a series of missions that feature ship-based combat and fleet management. It might be almost two decades old but it’s still a fantastic example of a great real-time strategy game. You can pick it up on Steam.

These are the best Disney games to play on PC. While Disney games on PC are rare, there are plenty of other new PC games in 2022, or if you want to stick to the classics, check out our list of the best old games on PC.