Similarly, building videogames around music takes a few key ingredients – gameplay remains top of the pecking order, of course, but you wouldn’t play a rhythm game if the soundtrack wasn’t up to par. Imagine if Guitar Hero swapped out its iconic song catalogue for tracks you hadn’t heard of – it arguably wouldn’t be worth playing.

With that in mind, we’ve put together a list of the best rhythm games around, from 2D rogue-likes with a solid beat, to lightsaber-wielding VR games, to games that can teach you how to play your instrument or let you play using your own music library – and even a game where you just press one button on the beat in increasingly challenging scenarios. A brief disclaimer – Tetris Effect was considered for the list but arguably doesn’t make rhythm its focus, so it misses out. In any case, you really should play Tetris Effect. Seriously. 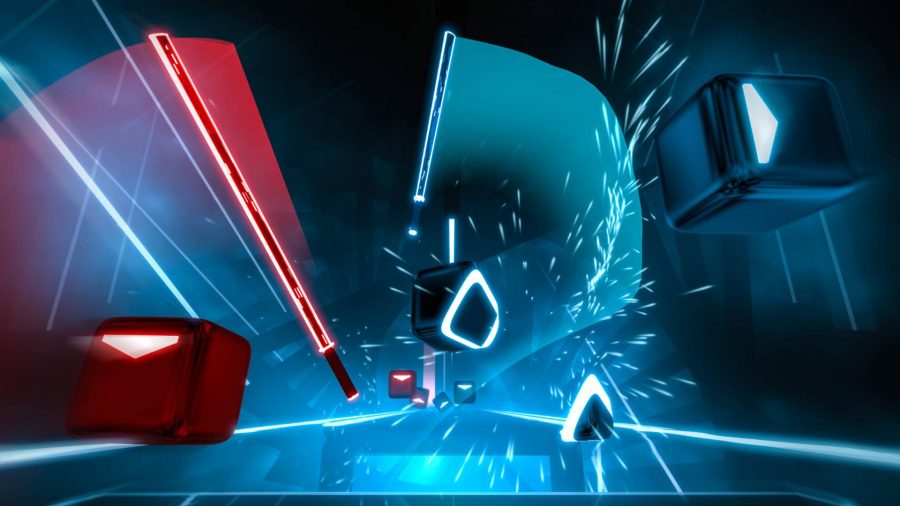 Beat Saber has taken VR by storm and helped put the fledgeling tech onto the heads and into the hands of many new players. Beat Saber is so simple in concept: using two different coloured lightsabers (yes, like in Star Wars), you slash blocks of the corresponding colour in the direction the game tells you to – making you feel like a Jedi in full flow (although you do tend to look a bit silly to everyone else in the room).

The game’s original soundtrack is excellent, but the PC version is the only one that supports the importing of custom songs – so you can bring Duel of the Fates in if you’re so inclined, and why wouldn’t you? 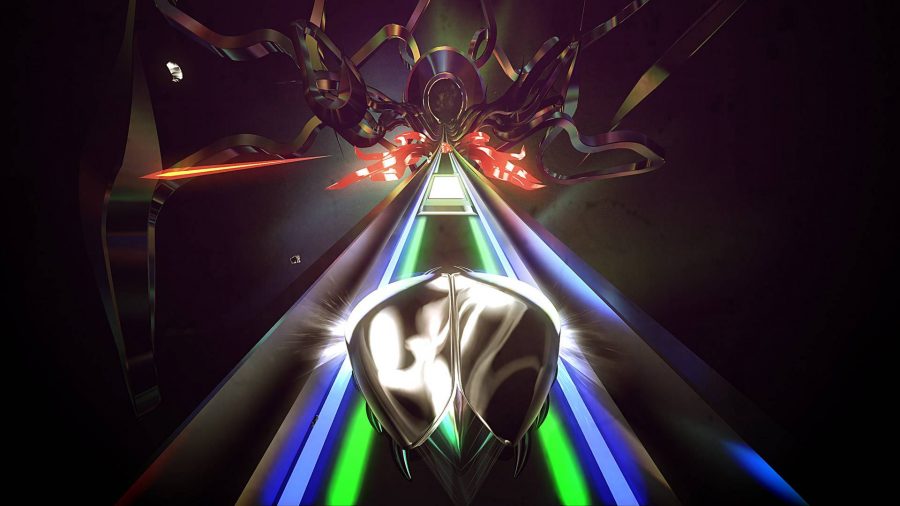 Thumper is a “rhythm violence” game, and while that may make it sound a bit aggressive, that’s due to the soundtrack being full of percussion, loud bass drops, and almost terrifying sound effects.

We wouldn’t say it’s oppressive, though – sending your little beetle protagonist hurtling around tracks at what feels like a million miles an hour is still great fun, although playing it in VR is arguably a little more unsettling.

Whichever way you play, Thumper is the rhythm games version of a roller coaster that you won’t want to get off of – just be sure to play with headphones. 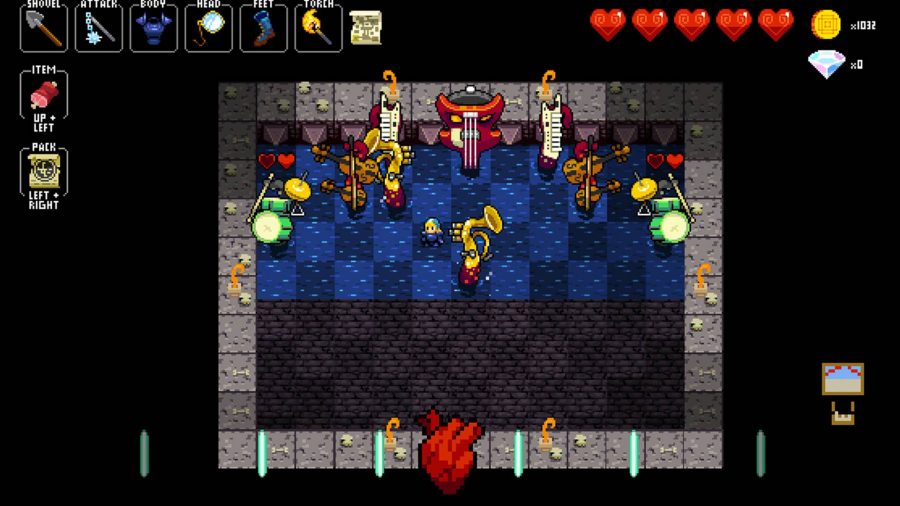 Crypt of the Necrodancer

A top-down rogue-like might seem an odd fit for rhythm-based mechanics, but developer Brace Yourself Games has stumbled upon gold with Crypt of the Necrodancer.

Every action in this dungeon crawl needs to be performed on the beat of the music – with different enemies following different beats. It takes some time to get your head around it, but for bonus points, you can actually play the entire game with a dance pad if you fancy breaking a sweat. 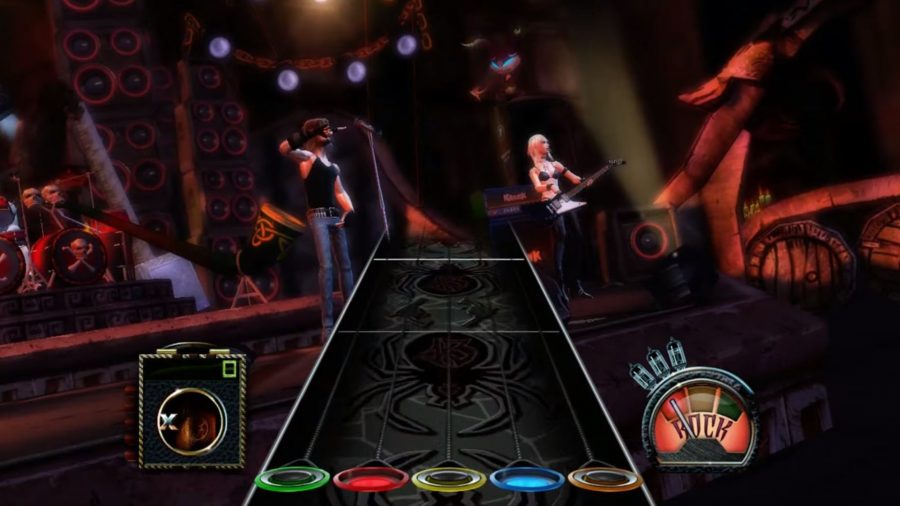 2007’s Guitar Hero III: Legends of Rock lives long in the memory, with the carefully curated soundtrack including bangers from the likes of Rage Against The Machine and Slipknot, all the way to Kiss and ZZ Top. Every song in the game can be played cooperatively, featuring rhythm guitar and bass depending on the track.

While this entry marked a high point in the general difficulty of the settings, Guitar Hero III: Legends of Rock still scales well to a broad range of players, with easier difficulty settings and slow songs for newcomers to get acquainted with before moving onto solo-heavy anthems. The fact that this series still has a thriving Twitch community over a decade after release tells you everything you need to know about its lasting appeal.

If you’re willing to put up with the clutter in your home of multiple plastic instruments, there’s still no finer way to jam out on with a group of friends, unless of course you’re actually in a rock band. 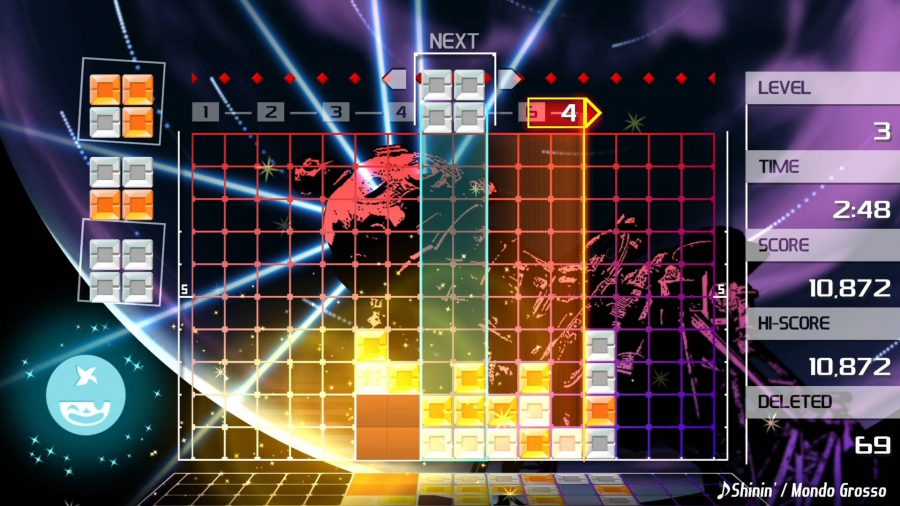 Tetsuya Mizuguchi’s first appearance on this list, Lumines was originally a PSP game that was remastered in 2018 and brought to PC.

Playing almost like a musical Tetris, players have to align shapes of varying coloured blocks that, when clustered together, will be removed when a “Time Line” passes over them – with this line being set to the musical accompaniment. The rows you clear add fresh layers to the game’s sublime soundtrack, too – a reward in and of itself.

Lumines: Remastered represents that rare instance of a puzzler that’s strangely relaxing, frantic, and euphoric all at once – especially as the blocks start to pile up and you’re scrambling to stay on top of things. 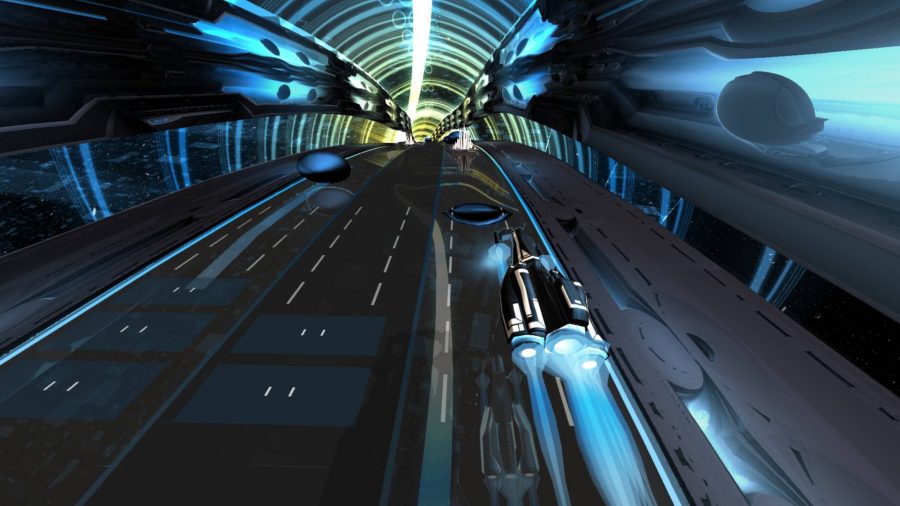 Have you ever played a rhythm game and thought “wow, this would be great if I knew some of these songs?” If the answer is yes, then Audiosurf 2 could be just what you’re looking for.

Whatever the backing track, you’re fired along a track at blistering pace and charged with collecting as many pickups as possible without colliding with any of the obstacles in front of you. It’s not exactly a novel concept, but Audiosurf 2 supports importing your own songs to turn them into a futuristic highway of notes. Just try not to get too familiar – there are still obstacles to dodge. 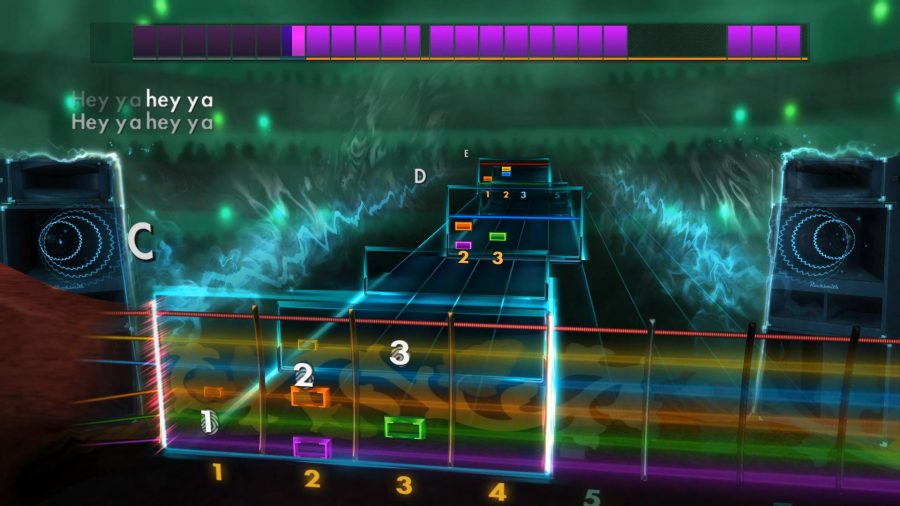 The awkwardly titled Rocksmith 2014 Remastered is a re-release of the original Rocksmith 2014, itself a sequel to the first Rocksmith title. Still with us?

Unwieldy title aside, Rocksmith 2014 Remastered is a rarity – it’s fun and educational, allowing users to plug in their own instruments (guitar and bass) and learn to play a multitude of songs. While Rocksmith doesn’t offer the pick up and play accessibility of most rhythm games, you’d be hard pushed to find a music game with the same degree of scalability.

Once you’ve mastered the content in the game, you can pick from over a thousand fully-licensed tracks as DLC – so the game can last as long as your blistered fingers can. 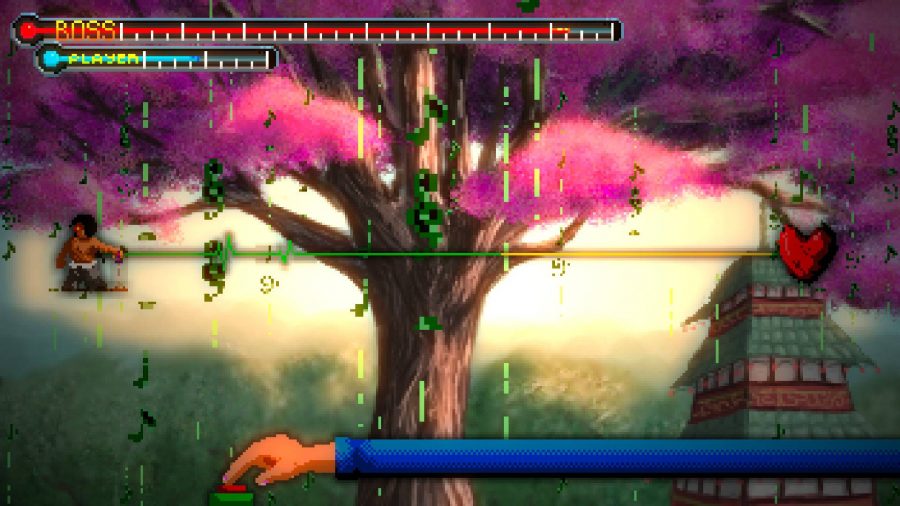 Easily the most obscure of all the rhythm games on this list, Rhythm Doctor sees players dole out medication to patients by, er, hitting the spacebar on the seventh beat of every bar, over and over again despite a cavalcade of audiovisual distractions.

Calling itself “the hardest one-button rhythm game you’ll ever play”, Rhythm Doctor plays with your expectations in fun and inventive ways, forcing you to push everything out of your mind in order to concentrate on the rhythm.

As you heal patients your screen might glitch, or there might be some kind of lag to accommodate. Even better, your screen may go blank – forcing you to count the beat in your head. You might want to invest in a metronome for this one. 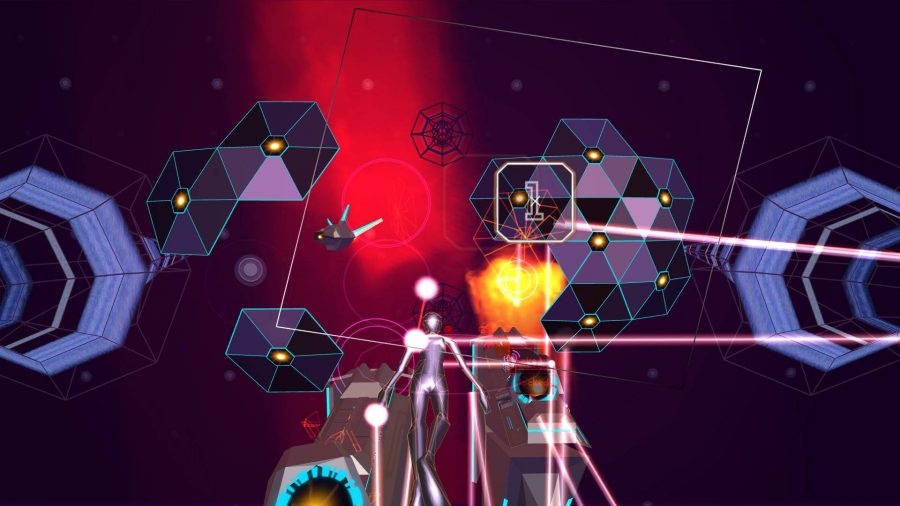 Remember 2001? No, not the movie, the year? Rez launched on the original PlayStation, with unique (and frequently impressive) wireframe visuals breathing life into an on-rails shooter/rhythm games hybrid. 20 years later and PC players can finally join in on the action with the expanded Rez Infinite, yet another masterful rhythm game helmed by Tetsuya Mizuguchi.

Every action in the Rez Infinite affects the soundscape, and vibration when playing with a gamepad only heightens the feeling of synaesthesia – Rez Infinite is all about breaking down the barriers between the senses, and it’s mad that it gets even remotely close to such a lofty goal. Yes, it’s abstract and a tad pretentious, but it’s also achingly beautiful from start to finish. We’d also recommend it to people who like on-rails shooters like Star Fox. 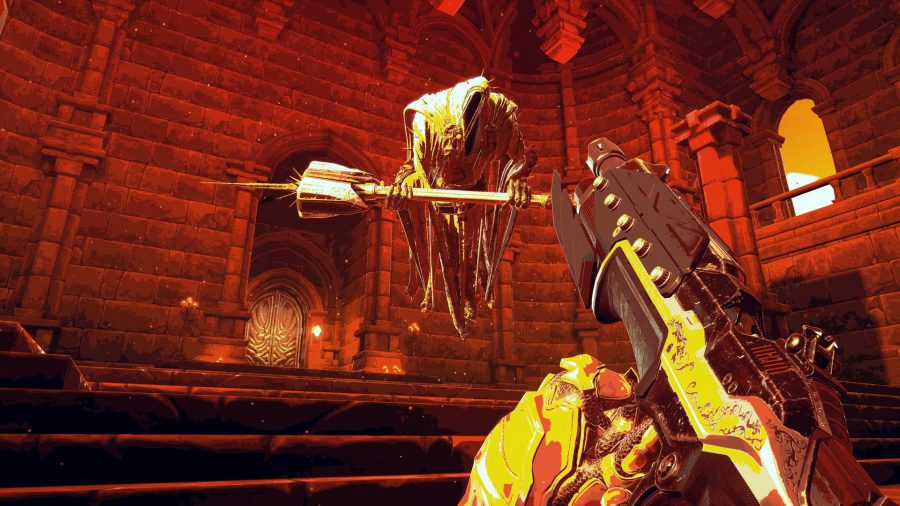 BPM earns a spot on this rhythm games list based purely on the fact that it does something very different with the genre. Rather than mashing buttons to the right rhythm or letting synaesthesia wash over you, BPM ports the music and melody over to a retro-style FPS rogue-like, where you blast demons to smithereens to the tune of wailing guitars.

Related: More about BPM: Bullets Per Minute and the Unreal Engine

Among the many things BPM does right are its boss fights, which offer a huge step up in challenge with attack patterns to learn and evasive manoeuvres you’ll need to pull in time with the soundtrack. 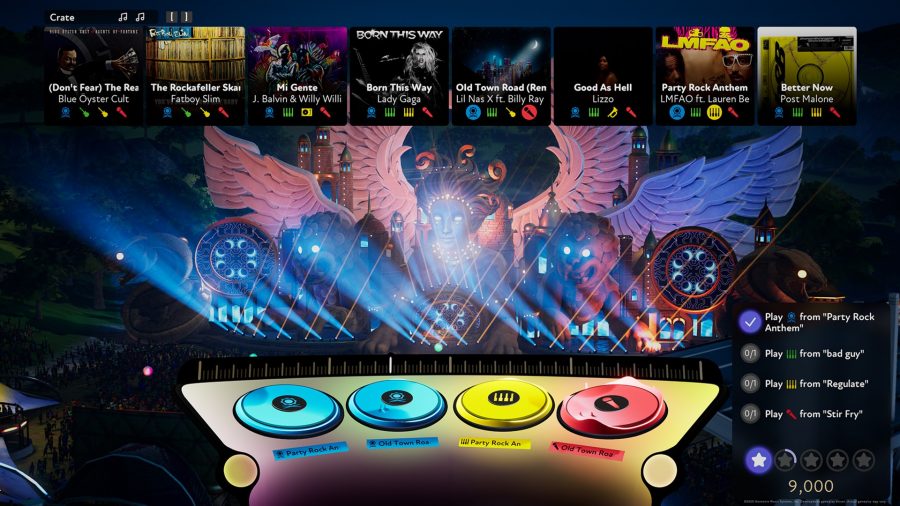 Familiar melodies are floating over from the Harmonix stage – is that the vocals from Smash Mouth’s All Star over the guitars from Rock the Casbah and the bass from Billie Eilish’s Bad Guy? DJ simulator Fuser gives you the tools to create the ultimate party mix – or the most unholy mashups you can think of. All the tracks are automatically beat matched and in the correct key, so all that remains is to choose the perfect moment to drop in the chorus to Party Rock Anthem. As if that wasn’t every single moment of every single day.

Unlike Harmonix’s previous rhythm games, there are no plastic peripherals required to play Fuser – just drag and drop the records into your virtual CDJ. You’ll need to time your drops to the beat for a smooth transition that’ll keep your audience grooving away. We tried out the virtual decks ourselves in our Fuser review. 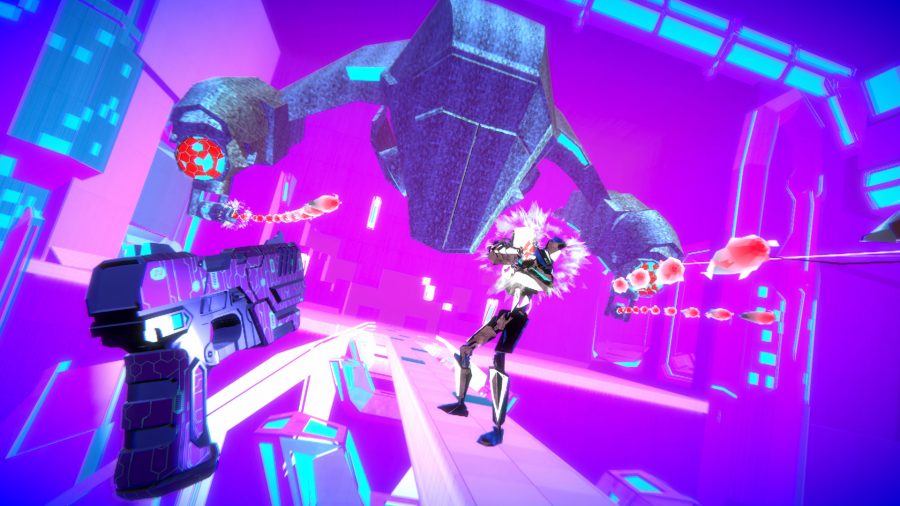 Pistol Whip combines first person shooters with a high intensity soundtrack to make you feel like an action movie star. Each pulse-pounding song has a handcrafted level filled with gun-wielding enemies. The stage constantly moves throughout the length of a song, allowing you to focus entirely on shooting enemies.

Mastering a song not only requires you to avoid incoming bullets, you’ll need to take down every enemy on the stage. Once you manage to find the rhythm, your shots behave similarly to a drum beat which accents key notes. Pistol Whip provides a very different, yet familiar experience that is sure to please any rhythm game fan.

And there you have it, our pick of the best rhythm games on PC. We’re pretty fond of list features here at PCGN, so there’s plenty more like it, including our round up of the best open-world games and the finest RPG games on PC. Now, if some bright spark would please make a rhythm game with role-playing mechanics set in a massive open map then we could merge them all into one.