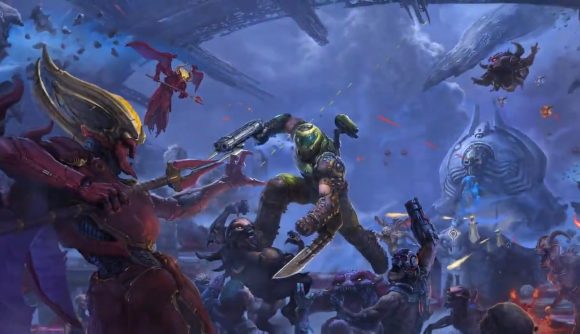 We got our first official peek at Doom Eternal‘s first campaign expansion DLC in the form of a teaser trailer today. The first major DLC release for Doom Eternal is called The Ancient Gods, Part One, and there’s going to be a full trailer reveal later this month at Gamescom, August 27.

The Ancient Gods, Part One trailer will be featured as part of Opening Night Live, the Geoff Keighley-produced pre-show that will be kicking off Gamescom. So far, all we’ve had to go on have been a couple of leaked screenshots of the upcoming DLC, and now we have a better look at what’s to come thanks to the teaser.

There’s quite a bit of information in there, as it turns out. The establishing shot shows a large facility set on pillars in a stormy sea, like a massive oil derrick. Cylindrical passageways connect outlying platforms, and cranes extend from the main structure – likely for raising and lowering craft into the water. The next shots show architecture that appears to be from Urdak – the ‘Heaven’ area featured in Doom Eternal’s base campaign.

“You are here to restore order to my world,” a voice (that sounds quite like Vega’s) intones. “But with the demons in control, you understand the threat they pose to all my creations.” 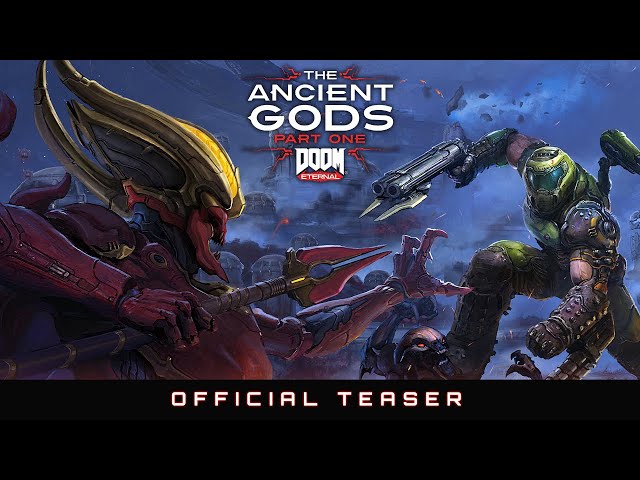 Arguably, the teaser dips into spoiler territory for Doom Eternal’s story, but that’s to be expected for a new narrative that’s set immediately after the events of the main game, right? Also, check out the piece of key art at the end of the trailer – is that a Summoner from Doom (2016) floating in the background, on the right-hand side?

Doom Eternal is one of the best new games of 2020, so we’re keen to see more of its shotgun-powered storyline develop in the upcoming DLC. You’ll have to wait for Gamescom though – QuakeCon is this weekend, and apparently we won’t be hearing more Doom Eternal news until the end of the month.