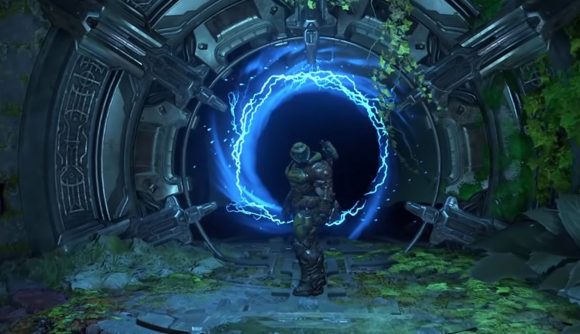 Doom Eternal already had the Slayer Gates, but now a modder is taking the intensity one step further. The horde mode mod will turn the FPS game into a survival shooter, as you deal with waves upon waves of demon scum.

Shown in the launch trailer, the mod puts the eternal in Doom Eternal by turning the Slayer Gates into an unending cavalcade of bullets and demonic body parts. You spawn as normal, but instead of the enemies spawning immediately with you, you have a switch. Once you press it, it’s game time, and you’ve to outlast and outgun everything that gets in your way. Survive, and you’re reset back to the start with some extra supplies before going again with a slightly harder set of antagonists.

Going by the new teaser, and earlier released gameplay footage, creator proteh’s work looks exactly how you’d expect and want a Doom Eternal horde mode to be. The Doomslayer versus as many monsters as can be spawned around him, with the only method for making it out alive being to rip and tear until it is done.

The first official DLC for Doom Eternal, The Ancient Gods, Part 1, was revealed in August. It’ll be stand-alone, and according to id Software it will deliver “what people wanted”.

You can see the Horde Mode trailer here:

The Horde Mode mod comes out September 13, you can follow the developer here for more details. Doom Eternal: The Ancient Gods, Part 1 will release October 20.