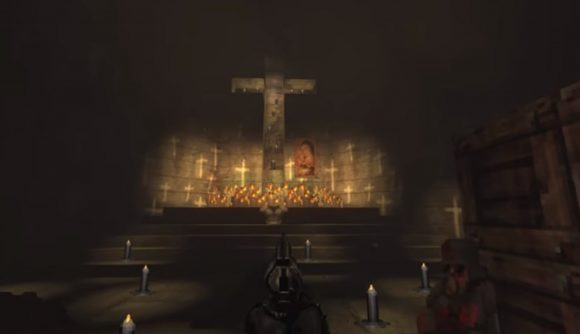 Doom has always had a bit of that Warhammer 40,000-style grimdark science fiction too it, and this mod makes that influence a bit more literal. Trench Foot is a full conversion Doom 2 mod that turns the FPS game into a bloody hellscape of religious idolatry. Well, moreso than usual.

An early version was released this week by creator Mr. Moon, letting you play a full level of demon-hunting action. The premise is simple: you’re a religious zealot battling on the frontlines against a demon-worshiping cult. The backdrop feels similar to any World War 1 game or movie, lots of concrete and wood between makeshift bases and trenches. Rotting corpses are strewn everywhere in the dreary landmass, stuck eternally beneath a stormy sky. Such Doom, much gloom.

Enemies are either green-eyed soldiers in uniform, or yellow-eyed flying mutations. Your shotgun, handgun, and machine-gun deals with them all the same. “As you can probably guess I’m going for a grimdark. dieselpunk, 40k Siege of Vraks kind of atmosphere,” the description on ModDB reads. “Putting you in the role of a fanatical religious zealot on the front lines of an apocalyptic war against demon worshiping degenerate cultists.” The Siege of Vraks was a 17-year-long war between the Imperium of Man and the Forces of Chaos to take back the planet of Vraks Prime. Literally all of the non-military population of Vraks Prime died in the crossfire, so whatever story Trench Foot tells, don’t hold out for that happy ending.

Doom and Doom 2 both got an update recently that added Steam support and gave them a new difficulty. Some other noteworthy mods the old PC games have spawned include a remake of Spaceballs, Borderlands (or BorderDoom, as it were), and remakes of both in the style of Doom 3.

You can follow the progress of Trench Foot here. If you’ve been playing the latest Doom, Doom Eternal, you can add Horde Mode with this mod. Otherwise, Doom Eternal’s first DLC, The Ancient Gods, Part One, is out in October.