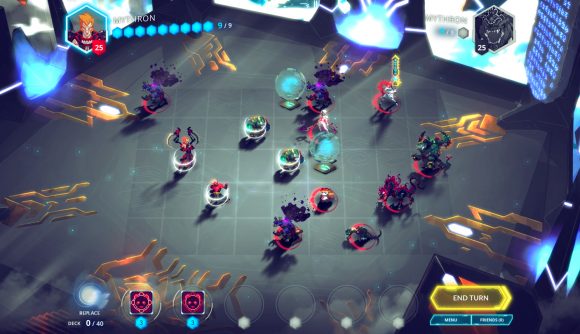 Staying afloat in the competitive market of games-as-service is tough, and we’ve seen many casualties over the past years. Now, Bandai Namco has announced its free-to-play CCG Duelyst will be shutting its servers down next month, ending the game’s three-year run.

“We are saddened to announce that the Duelyst servers will be shutting down permanently on February 27th, 2020, at 3:00 PM PST,” developer Counterplay Games writes in a post to the game’s Steam page dated Friday. “Saying goodbye to any game is never easy, and it’s always hardest when you love the game as much as we all love Duelyst. We’re incredibly proud of the effort our developers have put in on Duelyst over the years, and even more proud of the amazing community of friends and gamers that have enjoyed Duelyst.”

Originally launched in August 2016, Duelyst is a CCG built around a tactical tabletop battlefield. Its charming indie looks belie its mechanical strength, which was burnished by Counterplay co-founder Ken Lee, who had previously worked at Blizzard as the lead producer of Diablo III.

While Counterplay doesn’t give a reason for the shutdown, Duelyst’s player base has shrunk to a peak of less than a hundred per day over the course of the past year, which may well be why it’s decided to pull the plug on the CCG.

While Duelyst is going away, Counterplay is not – the studio is currently working on the upcoming ‘looter-slasher’ Godfall, which will launch on PC and PlayStation 4 later this year.

If you’re looking for a game to fill in the Duelyst-shaped hole in your heart, check out our list of the best card games on PC, or have a look at our guide to the best Legends of Runeterra decks.