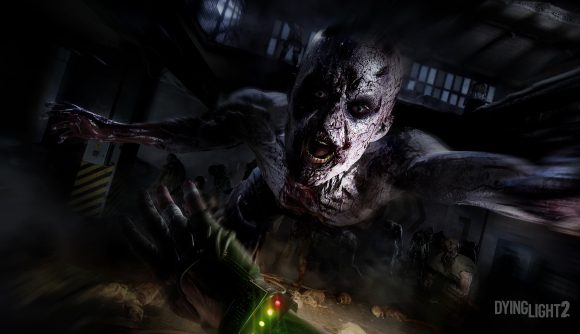 Techland was on hand at Microsoft’s E3 briefing today with a brand new trailer for Dying Light 2. It introduces the game’s new protagonist and provides a street-level look at the game’s new setting.

Dying Light 2 is set 15 years after the events of the first game, and thus, while the world has continued to suffer from the ravages of the zombie plague, a kind of uneasy system of factions and structures has emerged as humanity has adapted to a new version of normal.

Given how important parkour was to traversal and survival in Dying Light, it’s no surprise that the sequel’s protagonist, Aiden Caldwell, is also proficient in the art. He’s also skilled in combat, which looks like it’ll also be handy – Dying Light 2 seems chock full of unfriendly people and former people.

TechLand explains that its vision for Dying Light 2’s setting is that of a “modern dark age,” and city is an outpost amid that infected wasteland. People grow crops on the tops of skyscrapers while gangs clash in the struggle for power, and the infected emerge from their dark warrens at night to prey on anyone foolish or desperate enough to be out on their own.

Over the last year or so, we’ve gotten a few peeks at Dying Light 2, and it’s changing up the original formula in interesting ways. Wandering around outside at night won’t be quite as terrifying as it was in the first game, but you’ll be able to explore ‘dark areas’ at any time of the day that plunge you into inky blackness full of undead terrors.

Outside, it’s the living who you’ll need to be more concerned about. Dying Light 2’s factions have their own goals and ideals, and you’ll be able to play them against each other as you make your way through the story.

The dead rock: Here’s everything we know about Dying Light 2

Techland also revealed that Olivier Deriviere is composing the Dying Light 2 soundtrack. He’s worked on games like the recent A Plague Tale: Innocence, Vampyr, and Assassin’s Creed IV: Black Flag – Freedom Cry, and you can hear part of his score in the new trailer.