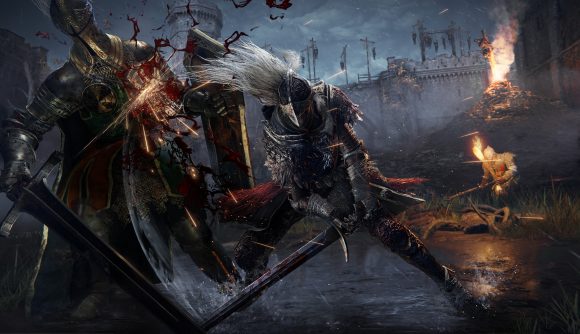 Elden Ring, FromSoftware’s much-anticipated open-world follow-up to the beloved Souls series of RPG games, has been delayed, the studio has announced. While Elden Ring is “in the final stages of development,” FromSoft says “the depth and strategic freedom of the game exceeded initial expectations.” The new Elden Ring release date is set for February 25, about a month after its originally scheduled release date.

FromSoftware announced the Elden Ring delay today (October 18) in a tweet, which also mentions a closed network test scheduled for next month. Fans can sign up for that at Bandai Namco’s official site, but the test is only available on current and last-gen consoles – PC players will have to wait for launch, it seems.

“Thank you for your trust and patience,” the Elden Ring team writes. “We look forward to seeing you experience the game in the closed network test in November.” The test, which will be held during specific sessions November 12-15, is meant to “improve the quality of the product” and will be free for all participants – however, registration does not guarantee a slot in the network test.

ELDEN RING will release on Feb 25, 2022, as the depth & strategic freedom of the game exceeded initial expectations. Thank you for your trust & patience. We look forward to seeing you experience the game in the Closed Network Test in Nov.

And, via @Nibellion, some additional details on next month’s network test:

While it doesn’t seem as though PC players will be able to join in the test, it’s highly likely that we’ll be seeing a lot more Elden Ring gameplay footage once it’s live.