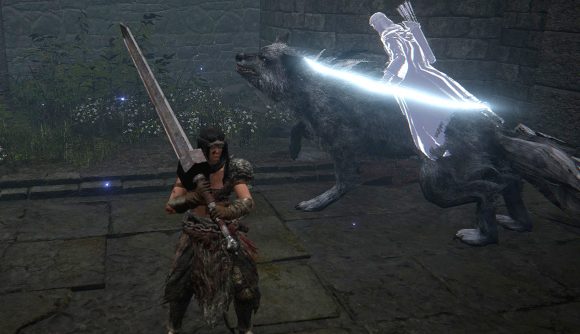 It turns out that the Elden Ring summon Latenna the Albinauric has a special power in the fantasy game, as one player discovered. If the archer Latenna is summoned in the presence of a giant Direwolf, she can actually ride on the back of the wolf.

Today on “what crazy thing has an Elden Ring player discovered now” – which includes such delights as hitting a wall 50 times to discover a secret or just pretending to be Will Smith – Twitter user @rasukuclaver found a surprising talent that the Ash Summon Latenna the Albinauric has.

A bit of context – the player can discover Latenna at the Slumbering Wolf’s Shack in Liurnia of the Lakes, which can only be accessed by making it through the Lakeside Crystal Cave – a nearly-hidden dungeon on the south side of the lake. She’s seen sitting next to a large sleeping Direwolf. Progress through her quest and she will accompany the player as an Ash Summon, and she mostly fights with her bow.

However, if you summon Latenna in one of the few locations where she can meet a similar Direwolf to her friend, she will climb on the back of the wolf – at which point it will become a danger to everyone in the vicinity, and won’t directly attack the player. PCGamesN tested this discovery at Caria Manor and yes, this very specific and wonderful thing happens.

If you need to collect Grave Glovewort to make your Elden Ring summons as powerful as possible, follow the link just there.