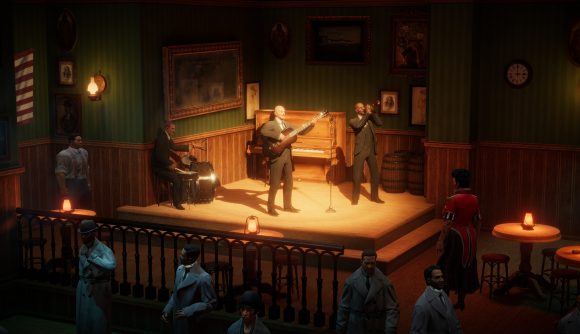 Bootlegging in the Windy City is about to get a bit tougher for wannabe gang leaders. Empire of Sin is getting an update in early February that will add a new mechanic around safehouses. Rather than knowing where enemy safehouses are located immediately, you’ll have to discover their locations by… ehh, let’s call it applying pressure to the faction’s bottom line.

Empire of Sin director Brenda Romero says update 1.03 for the strategy game will arrive early in February, and the marquee feature for this patch is the aforementioned safehouse mechanic. When you encounter a new faction, its safehouse will look exactly like the other white buildings in the neighborhood, and if you want to attack the rival boss, you’ll have to figure out where it is.

You can uncover clues as you explore the city that can lead you closer to the location of a safehouse, and there’s always the old fashioned method: busting up rival gangs’ rackets. That tends to irritate the bosses, who in turn will potentially give away their location in order to seek revenge. You’ll also be able to plant moles in enemy organisations that can feed information back to you.

You’ll still be able to meet with your rivals, but this will go down at one of their rackets rather than at their secure headquarters. And you’ll be able to tell how close you are to uncovering the location of their safehouse by checking the new progress wheel on the diplomacy screen. Smart!

There are a bunch of other changes set to arrive with update 1.03, including a combat ‘mini-resolve’ that will auto-resolve certain combat situations (a full auto-resolve system is due with update 1.04). Thugs have gotten smarter and will choose from a wider variety of outfits. Look out though, since fast travel is getting taken out of the game.

Check out our Empire of Sin review if you’d like to know more. Romero has said the team is working on bugfixes and overall improvements to the core game first, but that DLC will be coming eventually.