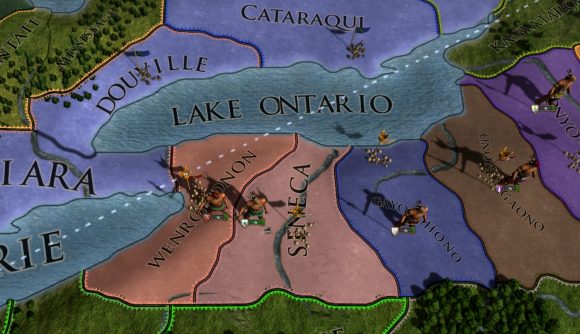 Europa Universalis IV‘s Leviathan DLC arrives tomorrow, and alongside it comes a major free update. The Majapahit Update, as Paradox has titled it, makes a host of changes to how the grand strategy game handles First Nations, Aboriginal, and indigenous tribes – and includes a bunch of bug fixes and tweaks.

At the top of the long list of patch notes accompanying the 1.31 patch is changes to American First Nations, for which you’ll need the Conquest of Paradise DLC. There are new rules for tribal nations: migratory tribes will use territory, moving on from one area to the next and acquiring development in the process. Migratory tribes will have a range of movement granted by tribal lands, and these will also “approximate a ‘claim’ system,” Paradox says.

Migratory tribes can opt to convert into nation states, which populates all their tribal lands, but requires them to first reform their governments in the case of “dozens of new American nations.” These new nations can form federations as they see fit, which opens up all kinds of new possibilities for the Americas in Europa Universalis IV.

You’ll also notice significant changes to the map in eastern North America, Southeast Asia, Indonesia, and Polynesia, and new Australian Aboriginal nations and religion are being added in this update.

Tomorrow we'll release the free 1.31 Majapahit update alongside the new expansion! Please note that you should finish off any ongoing saves BEFORE you update! Instructions on how to roll your game back to 1.30.6 can be found with the changelog here: https://t.co/tZCydColRf pic.twitter.com/jVsa7lP8AA

In Indonesia and Southeast Asia, you can look forward to new dynamic historical events, and there are new Sikhism guru mechanics as well.

The best part of Paradox patch notes for us is finding the individual entries in the list that sound the funniest when they’re pulled out of context. Here are some of those:

You can purchase Leviathan on its own, but it’s also included in the new Europa Universalis IV subscription service that launched in March. The Majapahit Update, however, is free for all players. Paradox cautions users not to load old save games once the new patch is installed – you can consult the patch notes on how to roll back to a previous version if you’ve got campaigns you’d like to wrap up.