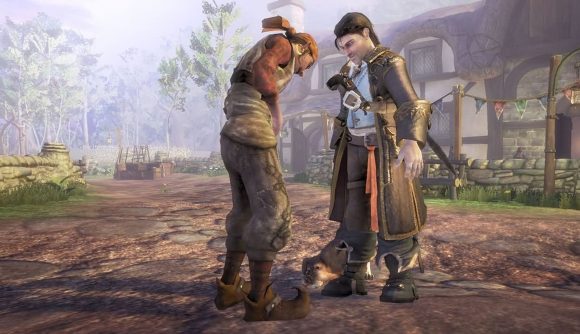 Fans of long-dormant series Fable and Perfect Dark got a glimmer of hope this week when new, unused Twitter accounts for both were discovered. Unfortunately, our dreams have been dashed, as Microsoft has said the handles are merely a formality in managing IP.

The two accounts were noticed by Verge journalist Tom Warren, who saw they’d both been registered this year – Fable in March, Perfect Dark in June. One is also believed to be registered to a Microsoft email address. The pair were locked, and the Perfect Dark one had a single follower, producer on the original game and current Microsoft creative director, Ken Lobb, suggesting something might be brewing for the FPS game.

Sadly, not so much. General manager of Xbox games marketing Aaron Greenberg replied directly to Warren apologizing for getting anyone’s hopes up, saying the accounts are merely “part of standard practice to secure social handles for our IP”. However, while that may be true for Fable, it doesn’t quite line-up for Perfect Dark. The PerfectDarkGame account sprung to life following the interest to tweet that it’s actually just a fan who grabbed the handle and accepted a follow from Lobb. The owner of the account has offered to give it to Microsoft if the company wants it, adding “sorry to disappoint everyone, I’m just a normal guy who got the [handle]”. It now seems dedicated to fueling rampant speculation.

The circumstances are certainly curious, but little more than that, at least for now. There was some suggestion that we’d see something new and Fable-related at this year’s E3, like a new sequel to the RPG game, perhaps, but there’s been nothing yet, and we really hoped 2020 would be the year of Fable. As for Perfect Dark, the only indicator a new one might happen is that this is the 20th anniversary of the original.

I know everyone is hungry for news, but sorry to get your hopes up. These accounts have been inactive for years, it’s standard practice to secure social handles for our IP.

After accepting kens follow I sent him a message saying that if you needed the @ I’d be happy to give it up, I am still waiting for a replay. I never thought it reach Greenberg, sorry to disappoint everyone I’m just a normal guy who got the @. (2/2)

If you’d really like to scratch some fantasy or sci-fi itches, we have the best open-world games and best Star Wars games for you, some of which you’ll likely find cheap at the minute in the Steam summer sale.