When I first came to Eorzea, I felt like a stranger. Like many others, I started playing Final Fantasy XIV’s free trial during lockdown, and have since moved onto a full subscription, partly to play with friends, mostly for a new outfit.

After a year of continuous play I still feel like a stranger; I’ve missed out on ten years of changes, tweaks, and community stories. Your character is also a stranger to FFXIV’s world of Hydaelyn – a curious soul with a mysterious power that you learn more about across a mammoth main quest line. One of the quickest connections I made to them is that we are both surrounded by people who have inhabited our respective spaces long before we arrived, and it’s this connection that inspires the roleplay I love so much about this MMO. But that’ll all change when Endwalker releases.

While its story and accessibility to solo players got me through the door, FFXIV’s jobs have been the biggest hook for me. They really let you immerse yourself in each role and aesthetic. Put it down to years of watching Kurosawa movies or infatuation with Demon Slayer anime, but I settled on the Samurai. Adventuring through Eorzea as a lone, wandering ronin fits the image of playing FFXIV I have in my head, though the melee DPS job’s set of abilities is particularly accommodating for solo play.

Endwalker adds two new jobs – Sage and Reaper – to try out, and while the Sage’s skill set of buffs and debuffs promises to be a lot of fun in trained hands, I’ll be a Reaper main come release day. I got to try the new job at a recent Endwalker press event, and it feels a lot like the Samurai I play in my own time. Both are melee DPS classes that have you cycle through basic attacks to build up enough power for bigger, nastier ones.

As a Reaper, you’ll use Slice, Waxing Slice, and Infernal Slice to build your soul gauge, which you can spend to lay down new moves. Weaving those actions into your flurry of attacks then fills your shroud gauge, eventually letting you cast Enshroud – a powerful spell that fuses you with a spirit, and supercharges all of your existing attacks. 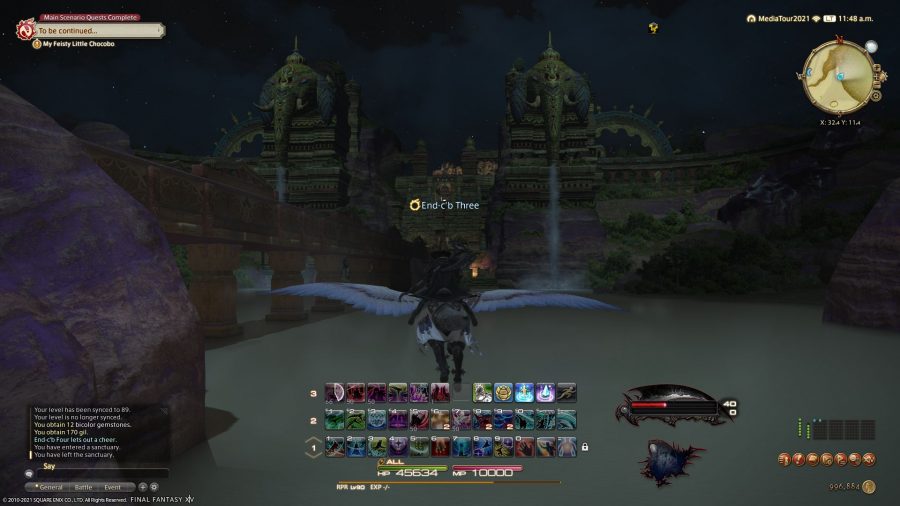 There’s also a suite of moves that boosts your damage output. One of my favourites, Arcane Circle, increases the damage dealt by everyone in your party by 3%. It may sound meek, but it reminds me of a move I miss from the Ninja job – Trick Attack – which raises the damage a single target takes from your party by 5%. Compared to a single-target debuff, the Reaper’s Arcane Circle lets me offer my party a little more utility. I enjoy the Samurai’s solo play experience, but I like to help out every now and then.

We’re given ample space to roam during our preview session, but I quickly make my way to the new dungeon, the Tower of Zot. There’s no use in flexing my new Reaper moves on a training dummy in Thavnair; true growth comes from getting your skull caved in by a dungeon boss.

while I enjoy the samurai's solo play, the Reaper lets me offer my party a little more utility

If FFXIV is like a Final Fantasy amusement park, then Endwalker’s new dungeon is a new and exciting roller coaster. The four-player mission – roughly equivalent to a Destiny 2 strike, rather than a raid – is based on a location from Final Fantasy IV and is comprised of tight, labyrinthine corridors, all crammed with mobs you’ll need to clear between boss encounters with the Magus Sisters. The tower provides a good challenge without ever really threatening to frustrate my party. As you clear each floor, you’ll face one of the three sisters, which gives you a chance to learn how they fight and what spells and AoE attacks to watch out for. This builds neatly to the final encounter where, of course, you’ll face all three simultaneously. It’s a tense, chaotic battle that tests your memory of each sister’s fighting style. 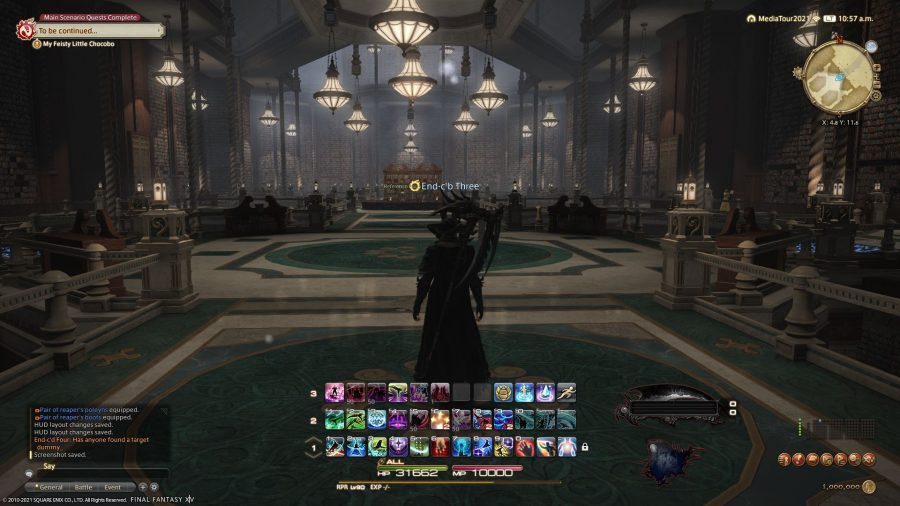 While the new dungeon gives me a great chance to get to grips with the Reaper and hone my rotations, it also shows me how the recently revealed stat crunch works. During a recent FFXIV Live Letter, director Naoki Yoshida revealed that the difference in gear attributes from levels 50 to 80 would be reduced alongside overall HP and damage values. Before our play session begins, we see another presentation from Yoshida where he stresses that the stat crunch shouldn’t change the feel of the game, but rather prepare it for the next ten years, so the numbers popping out of enemies in 2031 don’t take up half the screen.

After I finish my run with the Reaper, I return to the dungeon with the Samurai to see how it feels with a job I’m more familiar with. While the numbers you see might be lower than you’re used to, it really does feel the same. Unleashing the Midare Setsugekka attack after storing three Sen still takes a noticeable chunk off an enemy’s health bar, especially if you charge it with Hissatsu: Kaiten.

I’m still waiting to see the kind of roleplaying potential the Reaper will bring, but the prospect of figuring out optimal skill rotations is as enticing as ever. While plenty of what we’ve seen in the build is subject to change and our time was brief, I’m keen to explore more of what Final Fantasy XIV’s next expansion brings, even if it means leaving old comforts behind.