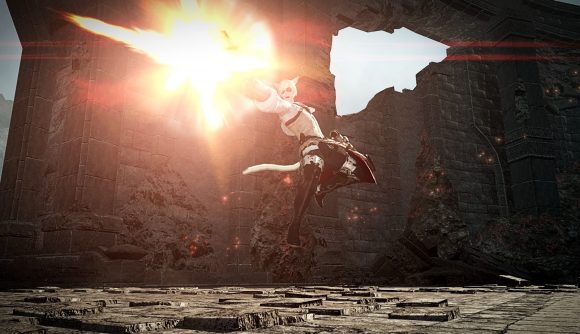 A controller modder has managed to play Final Fantasy XIV‘s Machinist class using pistol controllers from a special edition of Final Fantasy X-2. It’s undoubtedly one of the more immersive ways we’ve seen someone play the job in the popular MMORPG.

YouTuber Louis ‘Super Louis 64’ Hamilton got his hands on an FFX-2 controller that’s modelled after protagonist Yuna’s Tiny Bee pistols. He explains on Twitter that he wanted to make a controller that made spamming the Machinist’s Hypercharge ability “super fun by shooting like Devil May Cry 2” but went “too far” and developed a queuing system so he could pull off full-blown rotations.

“The triggers were first mapped to the RT and LT buttons to pull up the sub-menus for the ability,” Hamilton explains. “I had to reprogram the guns themselves to actually work in FFXIV. Using the controller’s d-pad, we can set up a combo that pressing the trigger would do. For example, pressing left on the d-pad queues up all left d-pad abilities whenever I pull the trigger.”

Hamilton has a full video lined up for Monday to explain it all, as it’s all a tad complicated. In the meantime, you can catch a glimpse of everything in motion below:

For example. Pressing Left on the D-pad queues up all Left d-pad abilities whenever I pull the trigger. It's a bit more complicated than that but that's what Monday's video will be for! Thanks for reading! pic.twitter.com/OpnnwL6LID

This isn’t the first time, though, that Hamilton has brought his controller modding capabilities to Eorzea. He played FFXIV’s Dancer job through an Xbox Kinect and ran across Eorzea in two hours using a Ring Fit Adventure controller. We’re not sure what’s more impressive, his engineering capabilities or his stamina. That, and he beat Dark Souls 3’s final boss by touching various bananas.

The FFXIV Endwalker release date may have been delayed by two weeks, but someone is certainly still finding the fun.