FFXIV’s Titania EX battle is one of the toughest tests you can face in the game’s third expansion. The Dancing Plague in FF14 see you in an extended scrap with the erstwhile King of the Pixies; it’s a battle that consists of multiple tricky phases that can wipe out a team of heroes instantly if you don’t all stay on your guard.

Thankfully, then, you have our FFXIV Dancing Plague Extreme guide to help you navigate past this bucolic, eight-player encounter. That said, if you’re not at least level 73 – the point at which the normal version of this trial is unlocked – beware of heavy spoilers for the duration of this guide. That said, we will be focusing on the EX version of this challenge which you can tackle at the game’s updated level cap of 80.

The Dancing Plague EX in Final Fantasy XIV consists of three main phases and an Add Phase in which other enemies are spawned. The primary section introduces the devilish mechanics FF14’s Titania boss will unleash on you, which then are reintroduced at different times and in alternating combinations later on to close out the fight. On completion, as well as some top-tier loot, you can continue the Shadowbringers Main Scenario if fighting on Normal, and gain bragging rights on Extreme. So let’s get into it, here’s how to defeat FFXIV’s Titania in The Dancing Plague trial.

Skip to the phase of this FFXIV Titania guide you need:

We’ll start with a thank you: much of this guide is indebted to YouTuber, Lycona DaCheeChee’s concise video walkthrough, so all credit to them. As they say, start off the fight by splitting your party in two: one made up of DPS characters, the others healers and tanks. Keep these squads in mind for the rest of the encounter.

You’ll need to watch out for AoE attacks for the duration, especially Phantom Rune. This ‘in/out’ area of effect move sees you either moving away from the big ol’ fairy, or stacking beneath her. Watch carefully for the animations she uses to indicate how you should dodge – this will be crucial later on. If you get hit you’ll become ‘confused’ leading you to move in all directions uncontrollably.

Next, Titania will produce eight water puddles, four in the centre, the others in the corners of the arena – this is Water Rune. Here you’ll need one player in each puddle, with ranged DPS and healers in the corners and tanks and melee DPS in the centre. Purple orbs will appear around each patch of water to indicate the time you have left: don’t leave the puddle until your allotted time elapses as you perform your rotations.

The next mechanic is Flame Rune, indicated by a massive fiery fist above Titania’s head. For this you need one of your two teams in one of the puddles right in front of the boss, and the other immediately opposite. After that are the Briar Tethers. Remember this important move the next time you are tethered: in your two teams, run to opposite corners of the map to break the connection. 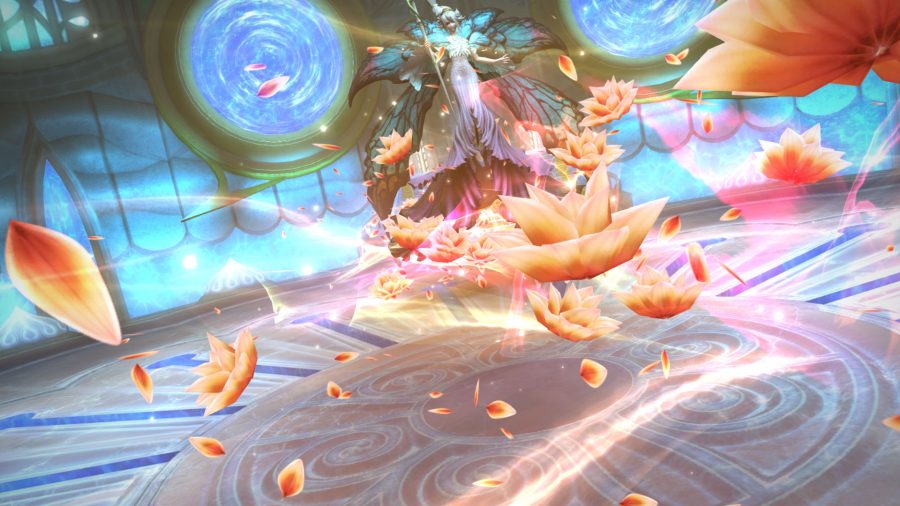 It’ll be obvious the moment this fight reaches its second phase: the fairy queen transforms the battlefield into a verdant forest full of natural nasties. Now Titania is at 70% health and casts Midsummer Nights Dream and covers the arena in grass – if you still don’t get the reference, perhaps you should have been paying more attention in literature class.

Anyway, this second phase of the theatrical test starts with the tether attack taking place no fewer than six times. This is Mist Rune and, here, you should take a max melee approach to ensure one of your tanks – preferably without a lightning debuff – takes the tether, first. Provided your team have done that, the tethered tank needs to get as far as possible from the rest of the team, as it will end in a lightning explosion. Naturally, healers should be on the ball here.

Then, maintaining your max melee, your team will have to take their turn for the remaining five hits. Tanks should do so first, then healers, and then DPS players last. When the player has absorbed the explosion, they must get as far away from the next tether player before returning to the group. Chances are you will also see Divination Rune, a cone-shaped tankbuster that must be shared with another tank. Needless to say, don’t stand in front of the boss unless you’re playing this role.

Bucolic plague: Get to 80 fast with our FFXIV leveling guide

You’ll also have to deal with Growth Rune. You’ll remember the Briar Tethers from earlier on once mechanic starts, but this time two AoE’s in the form of branching trees appear from two of the four corners of the map into the centre. All you need to do here is, in your two teams, run into the corners to break your tethers in the two corners safe from the AoEs. Next, go back to the centre, but don’t go as far as the roots that have grown in the very centre, naturally. If you can close the gap to the boss as a DPS, do so quickly to avoid damage from the AoE. This will likely be followed by a tank cleave, so be sure to avoid that.

Then you’ll see lots of circles appear with small blue shards flying around everywhere, this is Frost Rune. In this case, run to roughly between the centre and corner of the arena until the central circle disappears, and then run into its place. You’ll also most likely see Bright Sabbath and further instances of Phantom Rune. The former sees pink AoE circles on each hero, which are unavoidable. Spread out, take the hit, and react as best you can.

The Add Phase in the FFXIV Dancing Plague battle starts with the spawning of Peaseblossom, Puck, and Mustardseed, all at level 80. Concentrate your DPS on Mustardseed on the arena’s eastern side – if you don’t, its soft enrage will wipe out your entire party. Once it’s down, move onto Puck, and then Peaseblossom. One tank each should be assigned to the other enemies on the battlefield’s northern and western sides. AoE’s will happen for the duration of the Add Phase, but they only need to be avoided.

Then, once the second set of adds spawn, damage dealers should take down them down in the same order as the first: east, north, and then west. Be ready, though, as there are more AoEs with a greater frequency that hit harder and are tougher to dodge.

Then there are a series of further mechanics, starting with a blue knockback circle. Simultaneously, there are vines you need to watch out for, which always go in a line cutting through the centre of the map. You also need to pay attention to the direction the large green tentacle-like branches are facing: this is the direction in which they will slap. The solution to this is to position your character on the edge of the blue circle and get knocked back away from the tentacles.

At the same time, each member of your party gets a Briar Tether. In your same teams, ensure you are knocked back into your opposite corners. When knocked, the tether should break. There will also be AoEs, but your priority is your tether break, so get that sorted before you dodge those. Then two party members will get two big AoEs and another will get the stack mechanic. 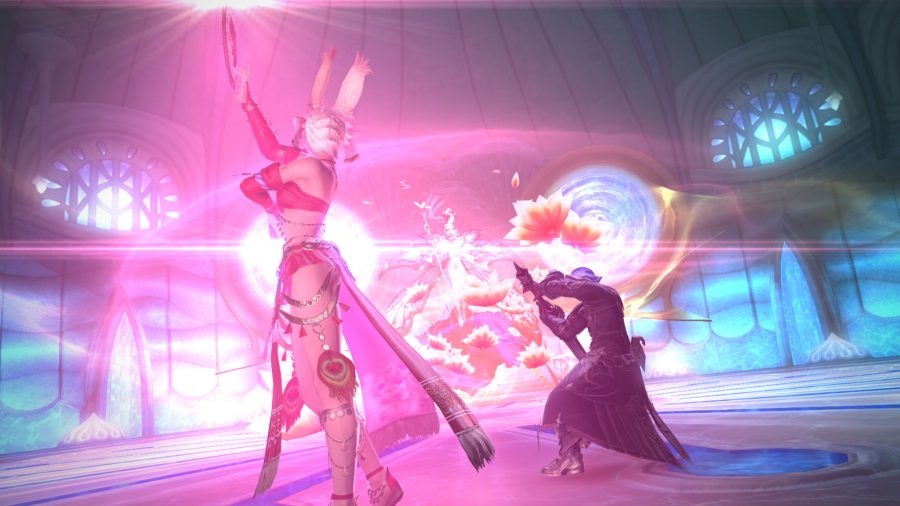 Naturally this is where the FF14 Titania EX trial is at its toughest, so watch out for some cheeky combinations. You’ve actually seen them all already, but you’ll certainly need your wits about you. First things first, the water puddles from the very beginning.

However, before you rush to your puddle – ranged and healers going to the corners, melee and tank in the centre, one character in each – wait for the in/out AoE attack. If you fail here you’ll get hit with confusion, flail around like a mad thing, and be unable to make the most of the puddle stacks.

Then the fire fist returns, so you know what to do: organise your team in the centre of the field but on opposite sides, just as you did at the beginning. However, the AoE growth branches now appear on the sides of the map. If they’re behind your puddle, move to the other unaffected central ones. Following that, dodge the in/out AoE attack however required. From there you’ll recognise everything from the Frost Rune to the tank share cleave and party-wide, unavoidable attacks until Titania is defeated.

And that’s you done, congrats on defeating Titania EX in FF14 and conquering FFXIV’s Dancing Plague trial on its highest difficulty. If you’re looking for more endgame activities in this, one of the best MMOs on PC by far, look out for the Nier-inspired raid coming to FFXIV Shadowbringers soon. For now, sit back and relax safe in the knowledge that you’ve achieved a job well done, without turning into a donkey.