What’s the fastest way to level up in Final Fantasy 14? One of the best things about Square Enix’s epic MMO game is its range of excellent jobs. The character you create can play any and every job released, so it can take some time to get your character up to scratch in multiple areas. You’re going to need to engage in a bit of FFXIV power leveling.

With the release of the Shadowbringers expansion, the level cap was raised from 70 to 80 and two new jobs were introduced, Gunbreaker and Dancer. So whether you want to get to level 80 fast or try out a new job, we’ve got you covered.

Equally, if you are starting the game afresh, our FFXIV leveling guide will help with some basic step-by-step instructions to help you on your way to the endgame in no time. For players looking for a no-strings-attached way to get into FFXIV, the game is currently offering 96 hours of free game time, which will give you a chance to give the fantasy game a good go.

When logging in to Final Fantasy 14’s third expansion for the first time, you have a decision to make. Either you get cracking with Main Scenario Quests (MSQs) – one of the best ways to level quickly, as you’ll see in the tips list below – or you try out the new FFXIV Dancer and Gunbreaker Jobs. The trouble is that the starting level of both new jobs is 60, and you need to be 70 before you can get started with the Shadowbringers MSQ.

If you’re dead set on the nuanced tank or the flamboyant damage dealer, there are a few ways of speedily grinding to where you want to be. First, be sure to get cracking with your new job quests: they will both acquaint you with your new roles and give you a healthy EXP dollop. From there, the most useful way to spend your time is by grinding FATEs – which can also drop FFXIV Aether Currents that, if you get enough, will allow you to use certain mounts to fly.

When it comes to leveling from level 70 to the new cap of 80, we always recommend kicking things off by diving into MSQs. Not only is the Shadowbringers story one of the best in the game yet, but it’s also a treasure trove of experience points – as long as you get through the tricky FFXIV City of the Ancients puzzle, of course. However, you may well find that you need to get through most side quests to keep up with the level requirements for the Main Scenario – including the equally tricky FFXIV Mystery Miners quest. Thankfully these are pretty good for the most part, so you’ll experience some of the best yarns the game has to offer on the road to the new FFXIV level cap of 80. 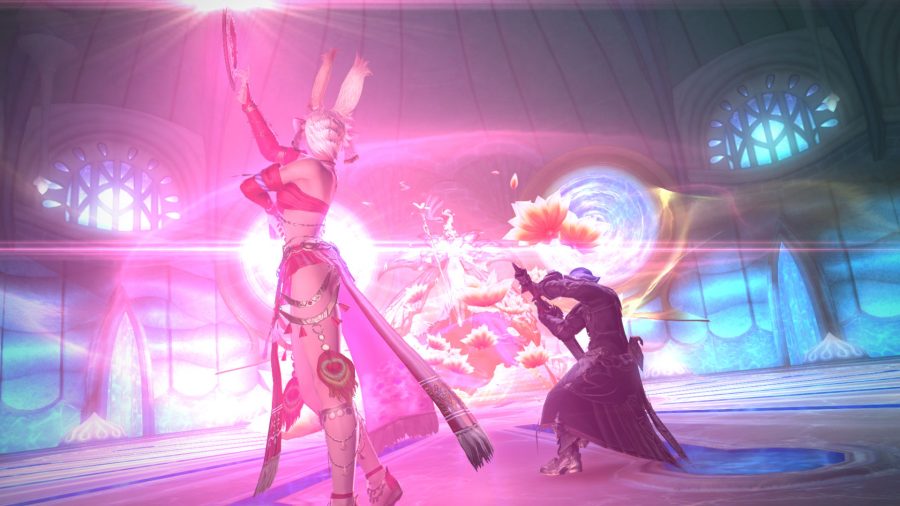 If you’re a new player, core, or ‘Main Scenario’, quests are the way forward: not only are they the best way of introducing you to the narrative that binds the world of Eorzea together, but they also deliver a hefty whack of EXP. However, if you’re not a high enough level for the next quest in the Main Scenario, side quests are also efficient for beginners when it comes to EXP per minute spent.

Make sure you don’t neglect your job quests, either. You’ll get a new set of job quests every five levels you reach until you get to level 15. From there, make sure you do a bit of FFXIV power leveling once you’ve chosen your Job. You can only level one of these at a time, but each rewards you with lots of EXP. 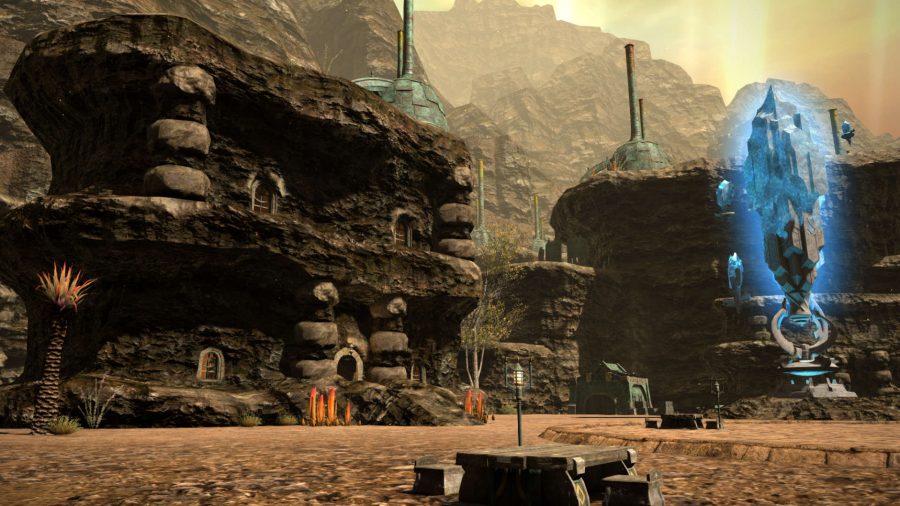 Just like in real life, you have the best chance of success when you look after yourself. That means getting your eight hours plus three square meals a day full of fruit and veg. This is the case when it comes to FFXIV fast leveling, too. Food is easy to get hold of, whether it’s been gathered or purchased in shops, and bestows a 3% EXP boost for 30 minutes each time. But, if you’re short on cash, you can buy food in early cities and inns for as little as 7 Gil.

After a day of adventuring and a hearty meal, chances are you’re going to need your 40 winks. Everybody needs a break now and then, there’s no shame in it – even when you’re doing some FFXIV power leveling. When you log off in a Sanctuary – that’s anywhere in a city such as Gridania or Limsa Lominsa, or near a big blue teleportation crystal, known as an Aetheryte – you get rested EXP.

This increases EXP gain by 50% and charges up to 1.5 full level bars of your current highest-levelled job. You’ll know you’re in a Sanctuary as a small moon icon will appear on your HUD. Whether you’re logging off for a few days or just going AFK to grab yourself some real people food, always try and stop off in these EXP-boosting areas.

The Challenge Log is a useful way of increasing the EXP from everyday activities you’ll probably be completing anyway. You can unlock it by completing the level 15 side-quest ‘Rising to the Challenge’, which can be found by speaking to I’tolwann in the Limsa Lominsa Upper Decks (X11, Y10). The Challenge Log offers EXP bonuses on completion of numerous activities from defeating small fry mobs to clearing out Dungeons or Trials. If you’ve polished them all off, bear in mind they reset each week.

Speaking of Logs, don’t neglect your Hunting one, either. This is essentially just a big ol’ list of enemies to track down and kill. Completing all Hunting Log tasks in each rank gives you loads of EXP, and it’s a good solo activity to pass the time while you’re queuing for a Dungeon or Trial. 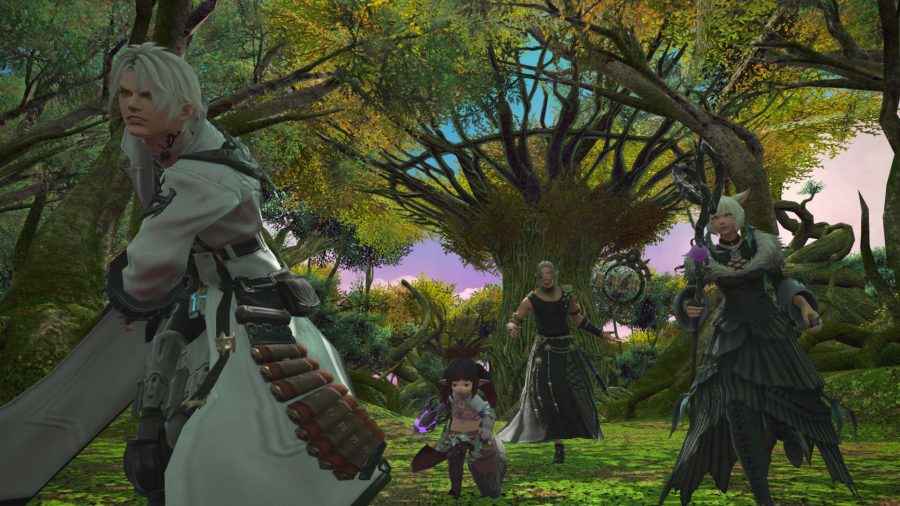 Guildhests are a great way to get to level 45

Dungeons, Trials, and other endgame activities can be daunting for new players in even the best MMOs. There can be an awful lot of pressure on each member of the team not to let the side down, especially if you’re a tank or healer. Final Fantasy XIV’s Guildhests, however, are not only a great way of showing you the late-game ropes: they give you a great big dollop of EXP, too.

For these reasons, Guildhests are essential to any FFXIV leveling guide, especially for new players. These instanced group quests are intended to teach beginners the basic group mechanics you’ll find in Dungeons and Trials, usually with a small boss fight at the end. If you’re struggling to find other players, use the Duty Finder to acquaint yourself with some dungeon buds.

Guildhests provide a decent chunk of EXP every five levels up until 45 and they scale nicely in difficulty. You can unlock them after completing a Guildleve – repeatable quests for Gil or EXP – and then talking to a Battlewarden. What’s more, there’s an EXP bonus for every new job with which you complete Guildhests. 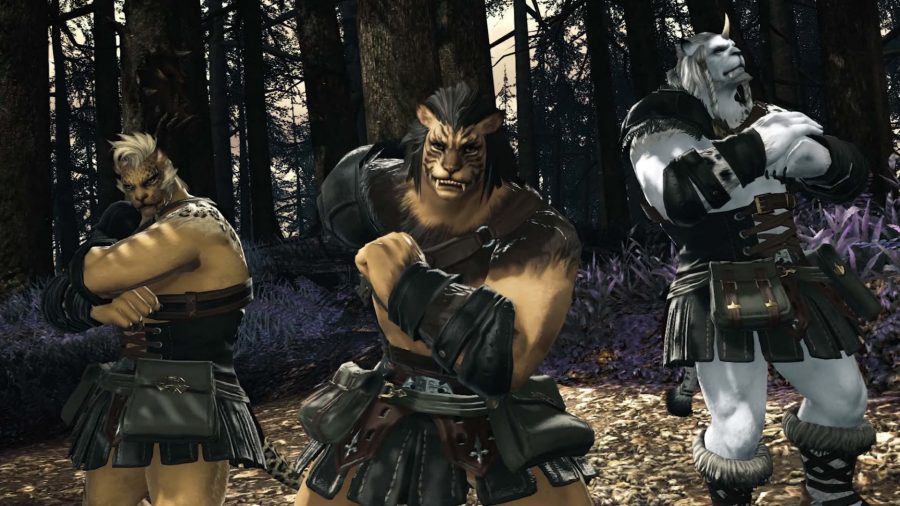 Now you have a better idea of how the endgame works, no FFXIV leveling guide would be complete without the Duty Roulette. This little beauty gives you EXP boosts for completing various mission types, but it’s especially useful when it comes to low-level Dungeons and Trials.

You can complete each daily from level 16, and completing either mission type at this level effectively guarantees a full level up. The only downside is that there are lengthy queues for DPS players, so find another activity to do while you’re waiting: the grief tanks and healers can suffer from the rest of their team often means there’s a shortage of them.

Take on a FATE

If you’re a DPS and don’t fancy waiting, FATEs are the way to go. FATEs are special boss fights that spawn randomly in the world. They can be tough, so make sure you tackle them with friends or find a squad with the Duty Finder to assist you. They don’t reward as much EXP as Dungeons, Trials, or Guildhests, but they’re quicker to get into. In the case of all these endgame activities, they will turn up in your Challenge Log, too, helping you out even more if you’re aiming to do some FFXIV fast leveling.

Free Companies (FCs) are similar to guilds in other MMOs and come with different perks depending on the FC rank. You can create a Free Company with friends or join a pre-existing group by using the Lodestone Free Company search portal. Once you have joined a Free Company, make sure the FC leader keeps ‘The Heat of Battle’ action activated, this buff provides a 5% increase to all EXP earned through battle for 24 hours.

And there you have it, there are no more excuses not to reach the highest echelons of this fantastical massively multiplayer game now that you have this FFXIV leveling guide. We hope you enjoyed your high-octane speed run through the gorgeous world of Eorzea, and that you made some friends on the way.