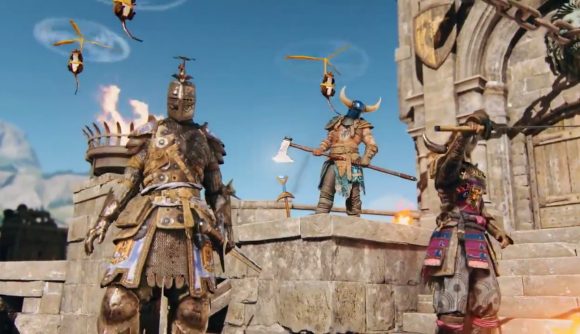 In the upside-down world of the fighting game For Honor, worlds have been colliding since the beginning – it’s a place where Samurai, Vikings, and medieval knights do battle, and they’ve been joined by warriors from ancient China. So it makes about as much sense as anything else that Yacht Club Games’ Shovel Knight is getting a crossover with For Honor, right?

It sure does – especially when you consider that Shovel Knight has already appeared in 25 other games that aren’t called Shovel Knight. The plucky 8-bit digger has appeared in everything from Brawlhalla to Yooka-Laylee, and now he’s lending his likeness to the battlefields of For Honor.

This time, however, Shovel Knight himself isn’t making an appearance – it’s gear only, but it’s still pretty cool. As you can see in the trailer below, from now through March 4, you’ll be able to snag new Shovel Knight-themed outfits, emotes, and executions in For Honor. There’s even an illustrious outfit called ‘Rodent Regalia’ which features a propeller rat. How sweet!

Everyone's favorite shovel-wielding hero is making his mark on For Honor! Shovel Knight arrives with special themed illustrious outfits, emotes, and executions. Showcase your shovel prowess with these items, available until March 4. pic.twitter.com/803PTwtFvI

Yacht Club announced last year that it was working on a “new 3D project“, but we reckon this probably isn’t what it meant. Instead, maybe we can take this latest collab as a hint that we’ll hear something new about Yacht Club’s next project in the near future.

In the meantime, head back into For Honor – and grab your shovel.