Where is Fortbyte 83 in Fortnite? We’re still fast approaching the end of this mammoth ninth chapter in this big puzzle challenge, but there’s a few pieces left to go. The Fortnite season 10 release date is coming soon but there’s still a few more Fortbytes to collect.

As usual, you’re going to have to get through the game’s Battle Pass content if you want to collect all the puzzle pieces and complete all the Fortnite Fortbytes locations challenges. This is because, to get Fortnite Fortbyte 83, you’ll need to be up to date with the game’s content so far.

As mentioned you’ll first have purchase the game’s battle pass for 950 Fortnite V-Bucks, but also spent plenty of time plugging away at your weekly challenges. If you’ve done that, you can head to the new little hilly area above and north-west of the Lonely Lodge and nab yourself the latest collectable in the puzzle. That, of course, is Fortnite Fortbyte 83, and we’re going to show you how to get it.

FORTNITE FORTBYTE 83: FOUND IN A ROCK GARDEN NEAR THE COAST

Compared to some of the recent Fortbyte challenges, Fortbyte 83 is simple by comparison. The direction is to find the puzzle piece in a rock garden near the coast. Watch the video below to see what the location looks like in-game, but our instructions should get there just as quickly. 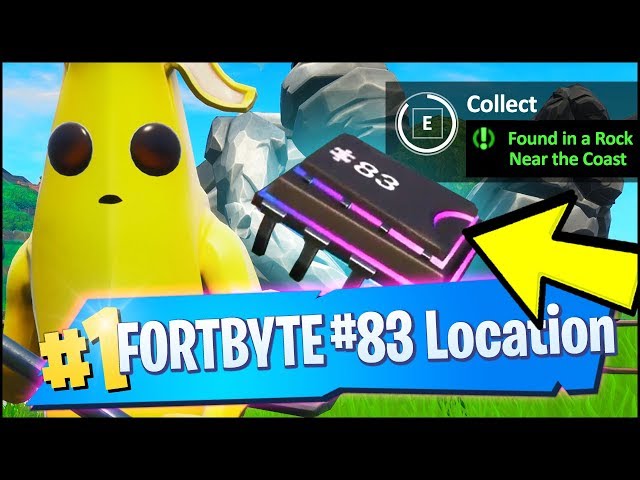 Directly east of the Pressure Plant, north-east of Lonely Lodge, and south-east of Sunny Steps, you’ll find a newer area – a high hill next to the sea with stone figures seemingly tending a rock garden. There are two chests here you can loot, too.

Once you’ve dropped in on the rock garden you’ll spot two figures made of stone, who seem to be tending to the garden. You’ll find the Fortbyte fairly obviously behind the bigger of the two stone figures. That’s it, job done. Nice to have a simple one now and again.