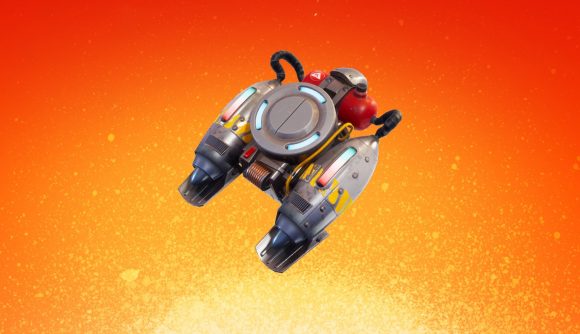 Today, two major items return to Epic’s battle royale game: Fortnite Jetpacks and Egg Launchers, and there’s a big map change too that involves Spider-Man’s Daily Bugle location. You’ve got to give Epic credit; they like to keep us on our toes.

The first unvaulted item is the jetpack, which you can find attached to the walls inside of the IO blimps. This’ll allow you to mess around more with verticality, but you can feather the jump button to allow you to float around a bit as you rain down hails of bullets at other players. Just keep an eye on the charge it has per jump, as you don’t want to end up falling from a great height – the ground still hurts, remember.

The next item is the Egg Launcher, which is an explosive weapon that feels like it belongs in Banjo-Kazooie rather than Fortnite. Finally, Bouncy Eggs are back too, and when you eat them, they effectively grant you low gravity. Items aren’t the only change happening today, either, as the map has had a small tweak too.

If you head over to the Daily Bugle area, you’ll notice that the IO blimp isn’t there anymore, no doubt because we all pushed back IO there. The blimp is still in the game though – it crashed in the sea to the west of the area. It’s now leaking oil into the surrounding water, and it’s called the Daily Rubble now. There’s not much there outside of some IO chests to open, but it’s a nice touch.

Here is what the crashed blimp looks like in game!

You can no longer enter the blimp and the fire on top of the blimp will hurt you 🙂 pic.twitter.com/zzQ6K8Aqp7

It’s also a sign of the changes we can expect across the season as the fighting continues across the map, and IO keeps getting their butts handed to them. Maybe that’s why they’re going to be calling in Darth Vader to help?