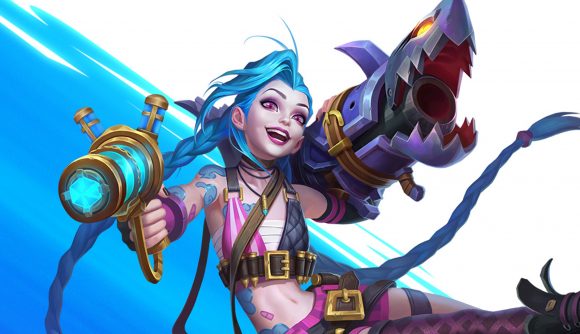 It looks like a Fortnite x League of Legends crossover may be coming next week, according to a reliable Fortnite insider and leaker. The Fortnite leak suggests that popular character Jinx will be available as a skin soon, as a tie-in with the upcoming Arcane animated series.

A number of other popular game franchises have had crossovers with Fortnite, including the currently available Resident Evil bundle, but there haven’t been that many crossovers with similar online phenomenons – other than perhaps Among Us, which almost didn’t happen.

Now, according to reliable Fortnite leaker Shiina, it looks like two of the world’s most popular online games are finally doing a crossover – League of Legends is coming to Fortnite, starting with the ever-popular Jinx. According to Shiina, this collaboration is to celebrate the release of Riot’s Arcane Netflix animated series on November 7 – which will show the origins of Jinx and her sister Vi as they grow up on the mean streets of Zaun.

We’re not sure how Jinx will appear in Fortnite – League of Legends itself is getting Arcane-specific skins so Jinx may be based on how she looks in the series rather than the original game. For popularity’s sake, however, it’s far more likely that the Jinx skin will be their classic look – although Epic may include an Arcane version as a separate outfit.

Next week, Jinx from League of Legends will join the Island, in celebration of Riot Games' new show "Arcane". pic.twitter.com/OBzfwBYJxM

Twitter user Shadow even created a skin concept that seems pretty likely to be similar to how Jinx will look in Fortnite, assuming they go with the character’s classic look.

Fortnite’s still in the middle of Chapter 2 Season 8 right now, with its all-new Punchcard quest system and Cube Queen invasion – who can be earned as a free skin if you complete the in-game quests.