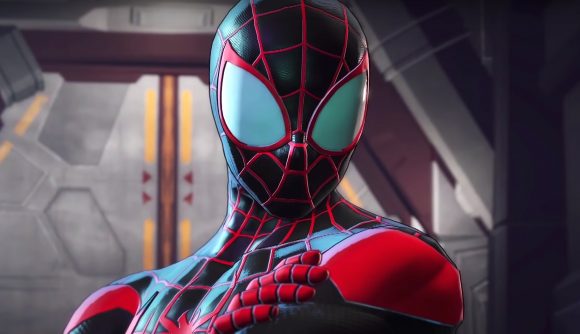 It seems like a line of text in the new Prowler skin challenges hints at a Fortnite Miles Morales skin possibly coming to Epic’s battle royale game, which – if it happens – will be the game’s third Spider-Man skin since Chapter 3 began last year.

Fortnite Chapter 3 Season 2 has already gone heavy on the Marvel collaboration, as along with Doctor Strange in the season pass there is also Spider-Man villain Prowler – who players can earn starting with the release of update 20.20 today by completing his various in-game quests.

However, players have spotted that some of those challenges contain quotes from Prowler from other sources. The most important quest, the one that unlocks Prowler himself, is accompanied by the quote, “you’re on your way, just keep going”. This is an important line from the animated movie Spider-Man: Into The Spider-Verse – which marked the first appearance of Miles Morales in a film – as it’s the last line spoken by Prowler to his nephew Miles.

A number of players, including myself, have wondered why Prowler was chosen as the latest Fortnite ‘secret’ battle pass character – as he’s a pretty Z-tier villain without his personal connection to Miles Morales’ Spider-Man. While this isn’t confirmation, it would make a lot of sense if Miles was added soon.

Clip in question for those curious
(Spoilers if you haven't seen the movie obvi) pic.twitter.com/FLvuo15t66

At the moment the only way to play as Miles Morales in a game on PC is through the new PlayStation Plus service, so hopefully Fortnite will change that soon – even if Spider-Man’s awesome Web-Shooters aren’t in there anymore.