Where is the Paradise Palms treasure map signpost in Fortnite? After a few seasons without them, treasure map challenges have finally made their return to Epic’s battle royale game. And, given the piracy thing of this eighth season, it makes a lot of sense. However, there’s a twist when it comes to the treasure map in Paradise Palms.

For starters, this is a staged challenge consisting of two parts. First you need to find the clues to find your Battle Star booty in the largest settlement in the desert biome, and then you need to find the precise spot. In previous seasons you could find your reward without having to actually find the treasure map at all. It might be a tad tougher now, but we’re here to help you every step of the way. Just be sure to fling us whatever gold coins you can spare as a tip.

So, as we mentioned, the Paradise Palms treasure map signpost is located on the east coast of the map, in the centre of the main desert biome township. It’s easy to miss, but we’re going to show you exactly where to drop to help you complete the first half of this week 8 challenge. So, let’s get to it: here’s where to find the Fortnite treasure map in Paradise Palms and what the special blueprint looks like.

The Paradise Palms treasure map signpost is pretty much slap bang in the middle of the desert named area. If you land at the orange plaza in the centre of the area, the signpost is on the other side of the western wall. There’s also a metal fence door in the corner of the plaza that leads to an alleyway – that’s another way of getting there. If that’s not clear enough, we’ve provided a map below of exactly where to search the Paradise Palms signpost. 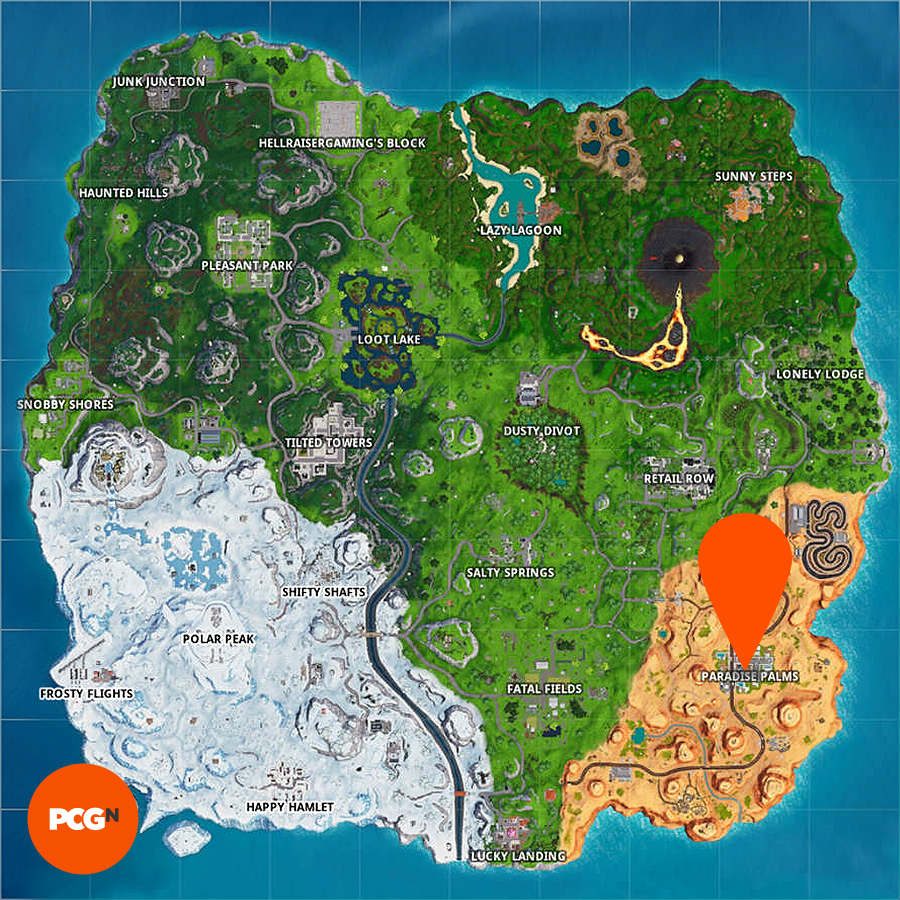 Once you’ve searched the signpost you’ll see the treasure map below, as datamined by @FireMonkeyFN. To us, X marks the spot in a place that looks more than a little bit like Frosty Flights.

So, as to where the treasure is specifically, check out our guide on where to search the X in Paradise Palms in Fortnite. Remember, this is a two-part challenge, so don’t forget to do this complete this concluding part.

And there you have it, that’s where to search the Fortnite Paradise Palms treasure map signpost. There’s plenty more weekly challenge goodness where that comes from, too: here’s where to dial the Fortnite Durr Burger number and the Pizza Pit number, just in case you’re feeling peckish during an especially long session of last man standing. Survival certainly works up an appetite, doesn’t it.