Want to know how to get a prop disguise in Fortnite? One of the items you can buy from certain NPCs in Fortnite during Chapter 2 Season 6 will turn you into a Slurp Barrel. As a tactic, just using the barrel for a few seconds to fool your opponent briefly might be enough to get the jump on them.

However, a challenge asks players to stay incognito for several seconds while staying very close to an opponent. This is probably the difficult bit as you must ensure that you’re not spotted, and since you’re an object that’s not normally found close to the NPCs that sell the barrels, it’s a bit of a tall order. Luckily for you, the barrel itself is smaller than your character, so you can just hide behind low walls instead, and as long as you don’t move, you shouldn’t attract too much attention.

While you work out how best to stay within 20 metres of your opponent for three seconds, we can at least help with finding the relevant Fortnite NPCs that sell prop disguises, including their locations, how much the prop disguises cost, and an explanation about things that can break the disguise immediately.

Where to buy the prop disguise in Fortnite

To get the prop disguise, you’ll need to buy it from one of a few NPCs scattered throughout the Fortnite map. It costs 75 Fortnite gold bars, and will activate immediately upon purchase. When you do buy a prop disguise, it’ll last until you shoot a weapon, you use another item, you are shot by an enemy, or two minutes have elapsed. 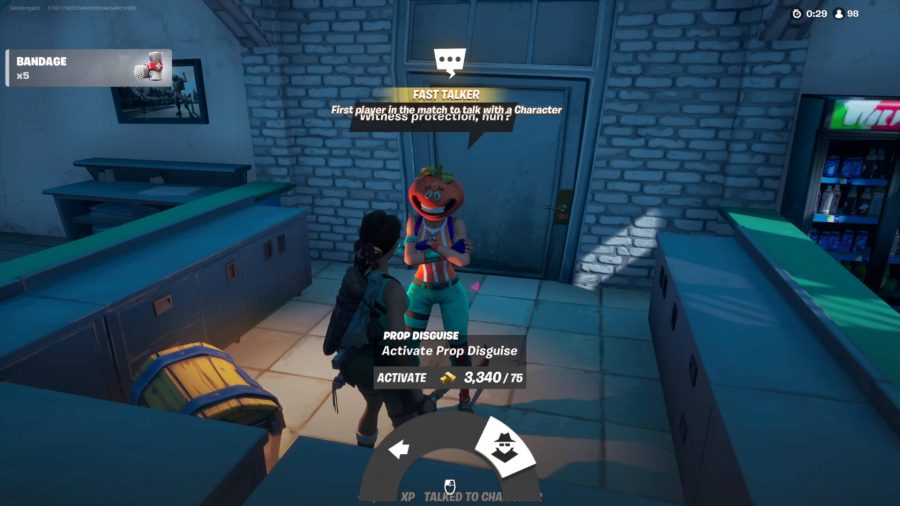 Here is the location of every NPC that sells the prop disguise in Fortnite:

In the meantime, there’s a few other recent Fortnite challenges that are worth completing, such as finding the Fortnite anomaly locations, locating the Fortnite literature samples, and taming the Fortnite animals. There’s also the new grappler bow, which you can get by finding Lara Croft in Fortnite.