Want to know where the Fortnite anomaly locations are? This season began with a bit of a bang as Jonesy addressed the big problem in the middle of the sky. However, it seems that Jonesy’s troubles aren’t over as progressing through certain Battle Pass ranks reveals new anomalies that need investigating.

This guide has all of the Fortnite anomaly locations for the season, what battle pass ranks you need to unlock each task, and the steps you need to complete to reveal the five anomalies. Each one unlocks a new style for Jonesy, so they’re well worth collecting if you want everything from the current Fortnite season.

Here is when each of Fortnite’s five anomaly challenges unlocks in the Battle Pass: 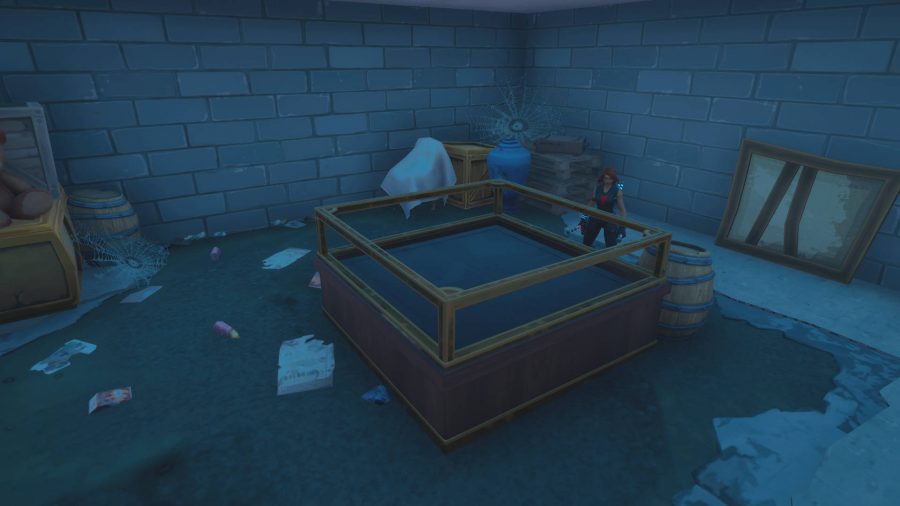 When you unlock Battle Pass rank 14, you’ll get this quest. Land towards the northwest of Lazy Lake. Head inside the yellow house with the number two on the front. In the kitchen you’ll see a butterfly. Follow it downstairs. At the end, you’ll see a wall with a monitor. Break through the wall to find the puzzle.

This is the solution to the first anomaly puzzle in Fortnite when viewed from its front if you reached the basement from the yellow house. If you approached from the next house over, simply walk past it and follow the instructions from there.

After putting the gems in the right order, something will appear in the middle. Interact with it to complete this challenge. 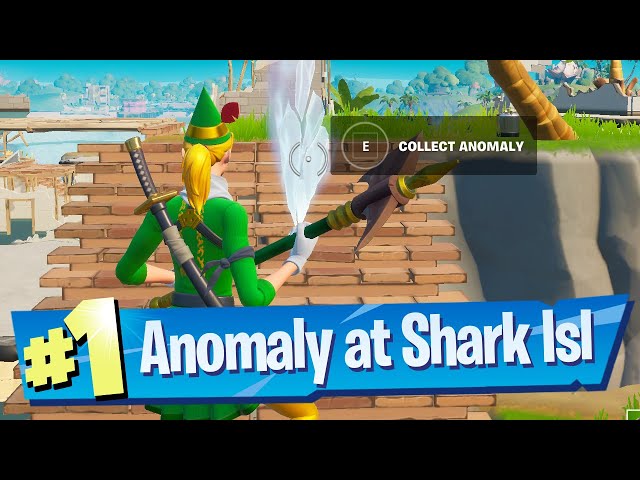 When you unlock Battle Pass rank 28, you’ll get this quest. Shark Island is to the north of Coral Castle. Once you reach the island, you’ll need to head to the northern part of shark island and you’ll find three hologram pedestals.

Each one requires you to perform a different action. These are the three actions you need to perform to solve the second anomaly puzzle:

Once you’ve completed the last task, the anomaly will appear close by. Just head towards it and pick it up to complete the challenge. 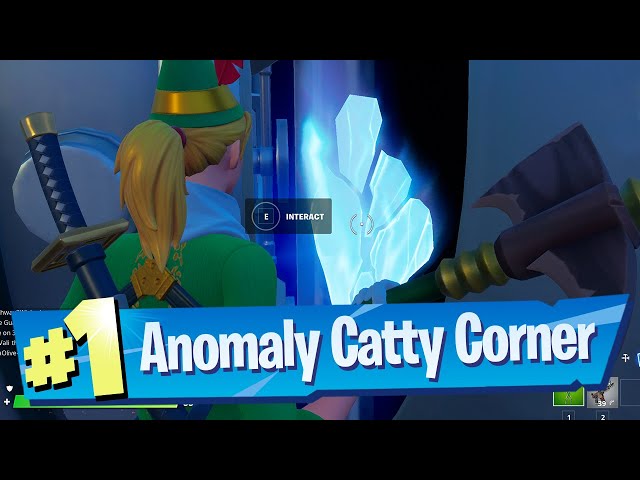 This anomaly only appears once you reach Battle Pass rank 49. This one is slightly misleading as it’s not at Catty Corner. Head to the east of Catty Corner to find a location simply known as REDACTED. Follow the butterfly that appears by the gate and into the door to your right. There is a vault that’s ajar with the word “Booooo” on the top right of the door.

Go outside and pick up one of the cannisters nearby, they have “Ka-Boom” on them. Shoot the cannister and eventually it’ll explode, revealing the anomaly inside the gap of the door.

This one is unlocked at Battle Pass rank 60. Head to the eastern ruins at Stealthy Stronghold. Follow it and eventually it’ll bury itself into the ground close to where Lara Croft is found. Use the harvesting tool to unearth the final anomaly.

You can only nab the last anomaly at Battle Pass 76. This one is straight foward to collect, as you just need to follow the butterfly up the tower that’s close to where the ‘W’ is in the Weeping Woods label on the map, then build a small ramp to snag the anomaly. Provided you’re good at avoiding the Spire Guardian, one of the new Fortnite bosses, you should be fine.

And those are the locations and solutions to the Fortnite anomaly puzzles. This will take you quite some time to reach the Battle Pass ranks needed to unlock the tasks, but they are valuable to snagging that little extra experience for this season.