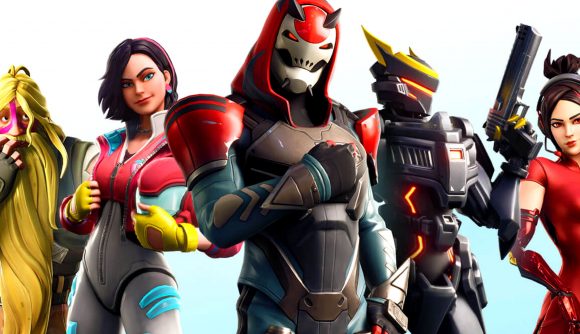 It looks like, just days ahead of Netflix’s Stranger Things series three premiere on July 4, Fortnite players are starting to see more signs of the crossover we’ve heard about appearing in their games. Following the streaming platform’s suggestion in an E3 Coliseum event last month that we might be seeing more of a tie-in soon, some players have now spotted something exciting – portals very similar to those seen in the show have started appearing in Fortnite’s Mega Mall.

As spotted by Fortnite Intel, players have noticed “Upside Down” portals inspired by the show’s appearing around the Mega Mall, a location added in season 9 after the volcano devastated the in-game landscape. It was also the location of a recent easter egg hinting at the incoming crossover – a retro ice cream parlour called ‘Scoops Ahoy’, tying into one from the show.

The portals appear to let players teleport to other destinations in the Mega Mall area, though it’s not yet clear if these are fixed or random. The Fortnite Master Twitter channel, which (though unaffiliated with developer Epic Games) provides stats, news, guides, and more on the battle royale has posted two tweets showcasing the new arrivals, which you can check out in the article below.

In the images and videos posted, you can clearly see the similarity between the game’s and show’s portals, stretching out their gnarled stems from glowing rips embedded in the mall’s walls. In the video, a Fortnite player runs into it and is immediately transported into a new area with a cool ‘boom’ sound effect.

Here's what it looks like when you enter the Portals… pic.twitter.com/PZskPcXq9u

Given the crossover signs we’ve seen so far, and with Stranger Things series 3 imminent, it looks likely that players could get some more content very soon, though epic Games hasn’t actually confirmed the crossover just yet. Perhaps we might even see that cosmetics set that Fortnite data miner Lucas7yoshi seemingly found in game code last month.

Related: Check out the best battle royale games like Fortnite

If you’re keen to check out these portals for yourself, head over to the Fortnite Mega Mall and see if you can scout some out. In the meantime, check out our guide to the Fortnite Fortbyte locations and find out how to grab every puzzle piece so far.