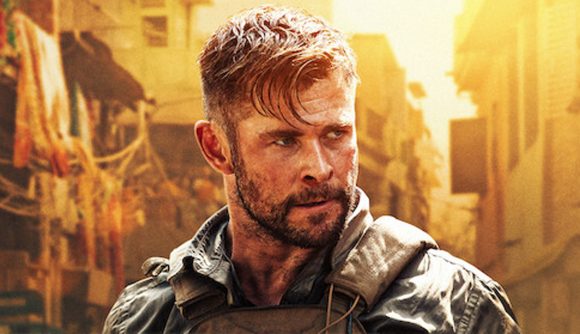 If a leaked skin from Fortnite’s latest update is correct, the popular online shooter may inexplicably get a crossover with Extraction – a Chris Hemsworth Netflix movie from last year – which may be entirely to settle a bet between Epic and the directors of Avengers: Endgame.

Fortnite is home to all sorts of crossovers, from DC Comics to Marvel to even Street Fighter, but usually the franchise being referenced is either popular or timely. For example, this Summer’s Ryan Reynolds movie Free Guy is getting a skin in the game, which is weird but at least the film is this month – but dataminers have uncovered another skin within the Free Guy update’s files which is even more baffling.

The leak, spotted by a number of Fortnite dataminers including @shiinabr, shows a new skin called “Dusty” in the game’s files – showing what appears to be military fatigues with tattooed arms. This skin matches exactly with Tyler Rake (Chris Hemsworth), the main character from the 2020 Netflix movie Extraction.

Despite poor reviews from critics and viewers – it currently stands at a 56 on Metacritic with an only slightly better 6.4 from users – Extraction was one of Netflix’s most popular recent original movies, so it’s not outside the realms of possibility that Chris Hemsworth’s character would get a Fortnite skin.

As spotted by @gameshed_, This "Dusty" skin is Chris Hemsworth's character from Extraction "Tyler Rake"

One of the 100% guaranteed signs of this is the tattoo on the arm! pic.twitter.com/FBxGwQ24Va

However, the more interesting reason for the Extraction crossover is because of a bet between Epic’s chief creative officer Donald Mustard and Avengers directors the Russo brothers – about who would win in a fight between Tyler Rake and Keanu Reeves’ John Wick, who is already in Fortnite. This was last year, so the word “timely” doesn’t even begin to fit into this story.

Hey Joe. Maybe we should put Rake in Fortnite and find out 😎 https://t.co/oQIlMJtnCO

We’ve no idea when Tyler Rake will make it to Fortnite, if he does, so players will have to make do with Superman for now. And Thor, of course.